Right back in January, I had intended this to be the second Icon I was to make. But some friends and my better judgement persuaded me to enter the Women’s Hour Crafts Council prize, and this was my entrant for the piece I would display if successful. I wasn’t. Here he is. 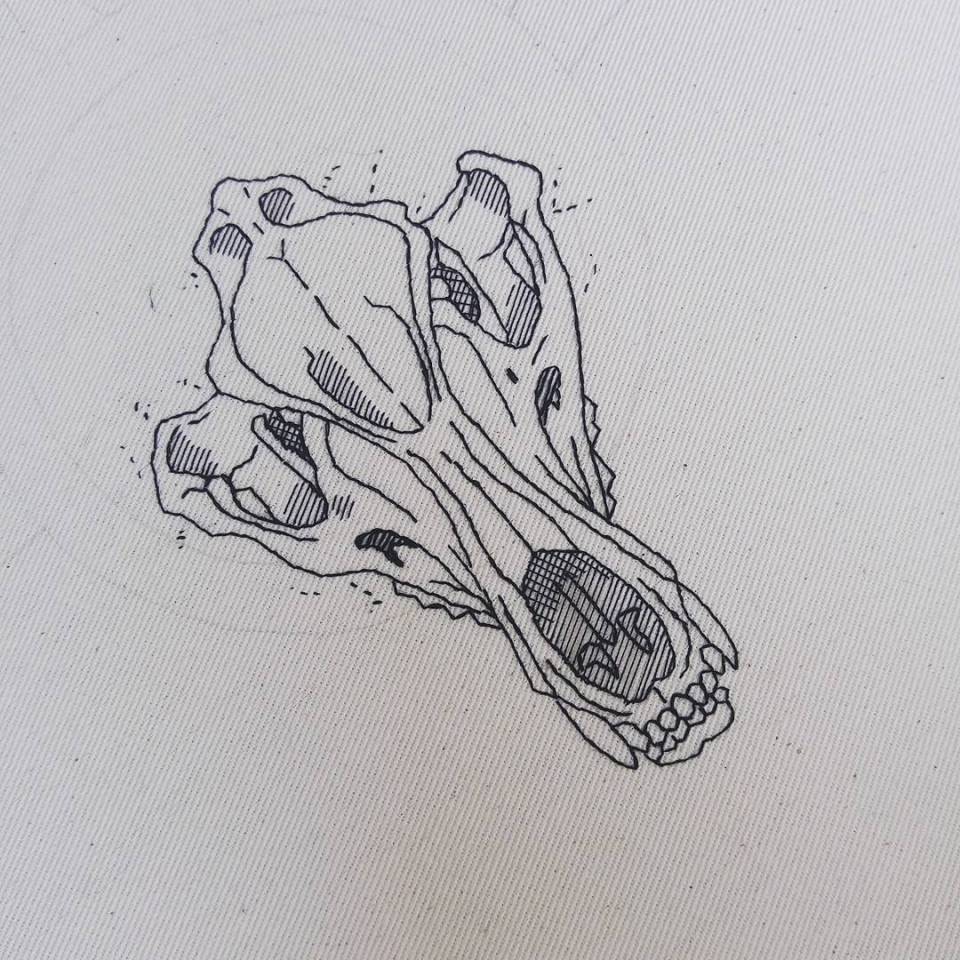 It’s an interesting facet of working like that though: I designed it months before, and at the time I had envisaged all the icons having quite similar halos and design elements. But as always I evolved throughout the project and so when it came to realising my original design, I was initially worried it now seemed too simple.

As I’d progressed through the series, I had incorporated a lot of symbolism as I usually do, and now looking at and researching the Thylacine, I couldn’t find many threads to pull on, to weave into this design. 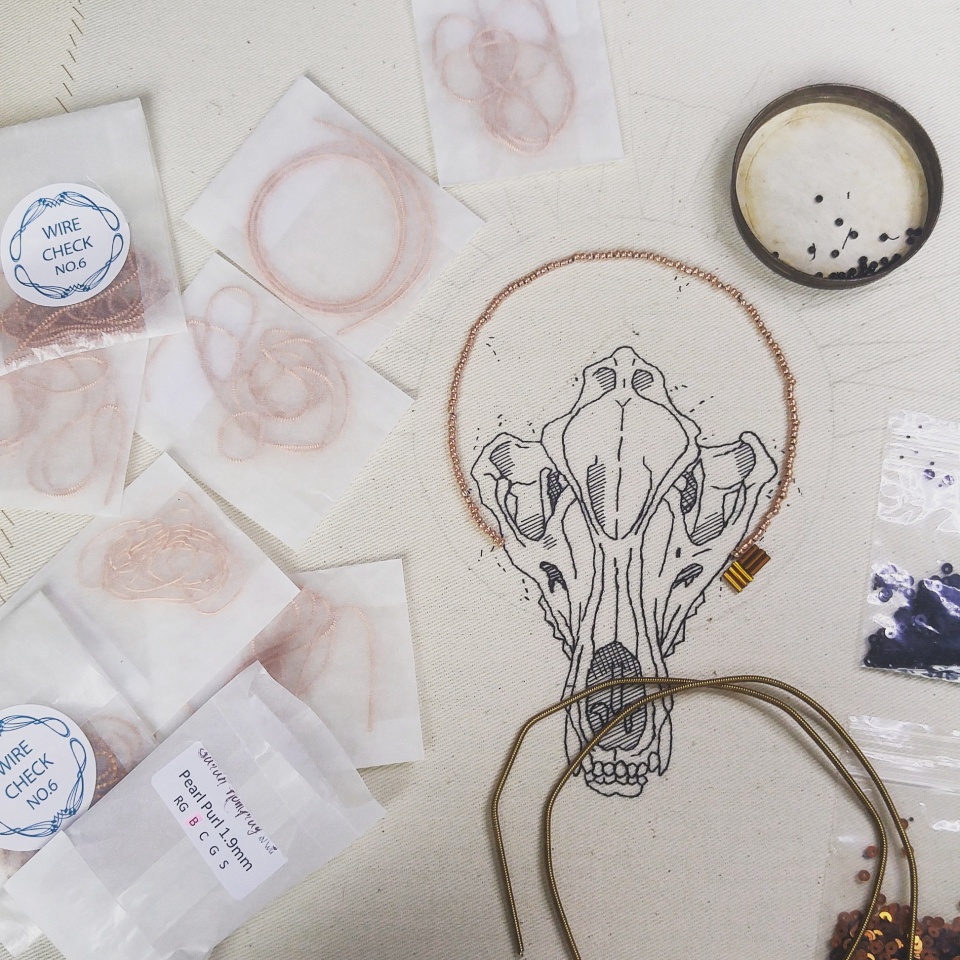 My original design took as its focus the physical appearance of the Thylacine, a brown and black stripy animal, as the main characteristic of the Icon.

By this point I had also amassed a wealth of bronze and copper materials and deciding not to second guess myself, proceeded with the shape and composition as I had originally envisaged it.

I actually found designing with these colours quite challenging, as balancing the metallic tones of rose gold and copper, and bronze and brown, with black was tricky to not have them fighting with each other. 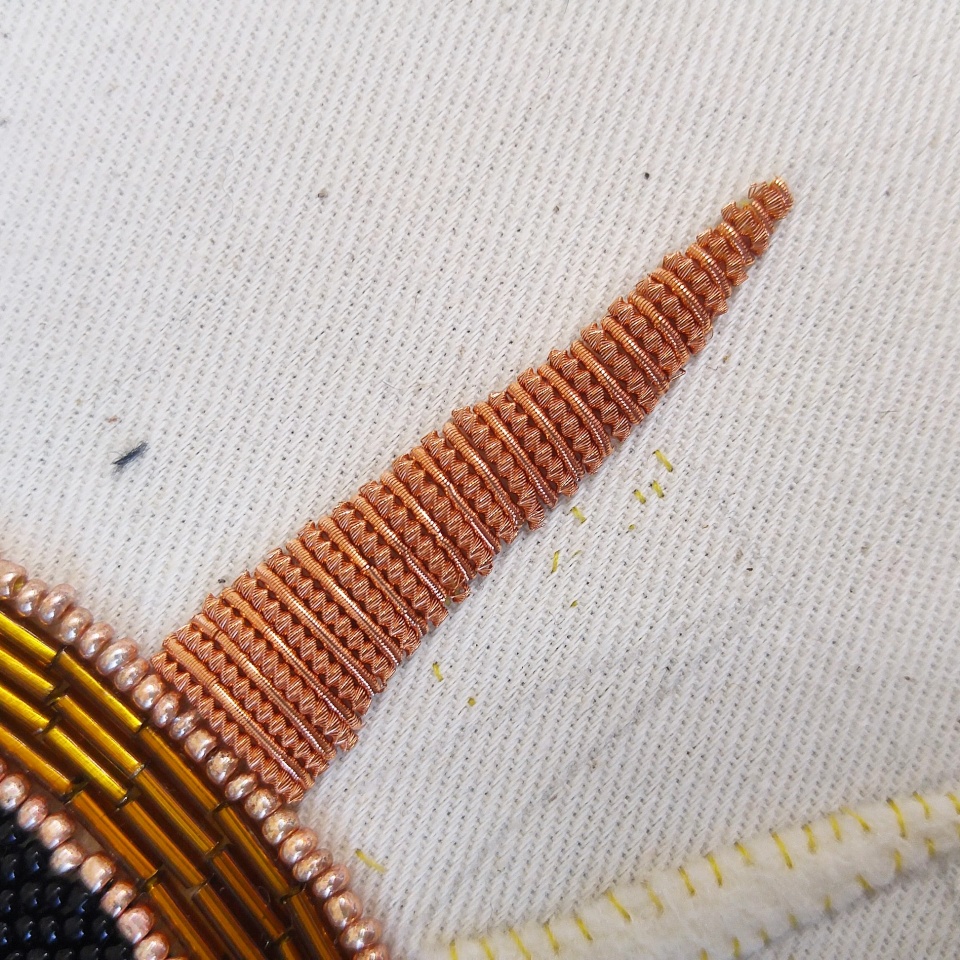 It was the goldwork that was the star of the show though.

I was using a basic cutwork technique, but alternating copper wire check with smooth purl over felt padding. Each one of the rays took about an hour.

Truth be told, I actually started this piece before Our Lady of The Flowers but had to abandon it about this stage as I was waiting on materials to come which ended up taking forever to arrive. Not ideal.

Here I have edged the alternate rays in copper pearl purl and then used two types of check to fill them in chip work – copper bright check and bronze wire check – and arranged them in an ombre pattern. 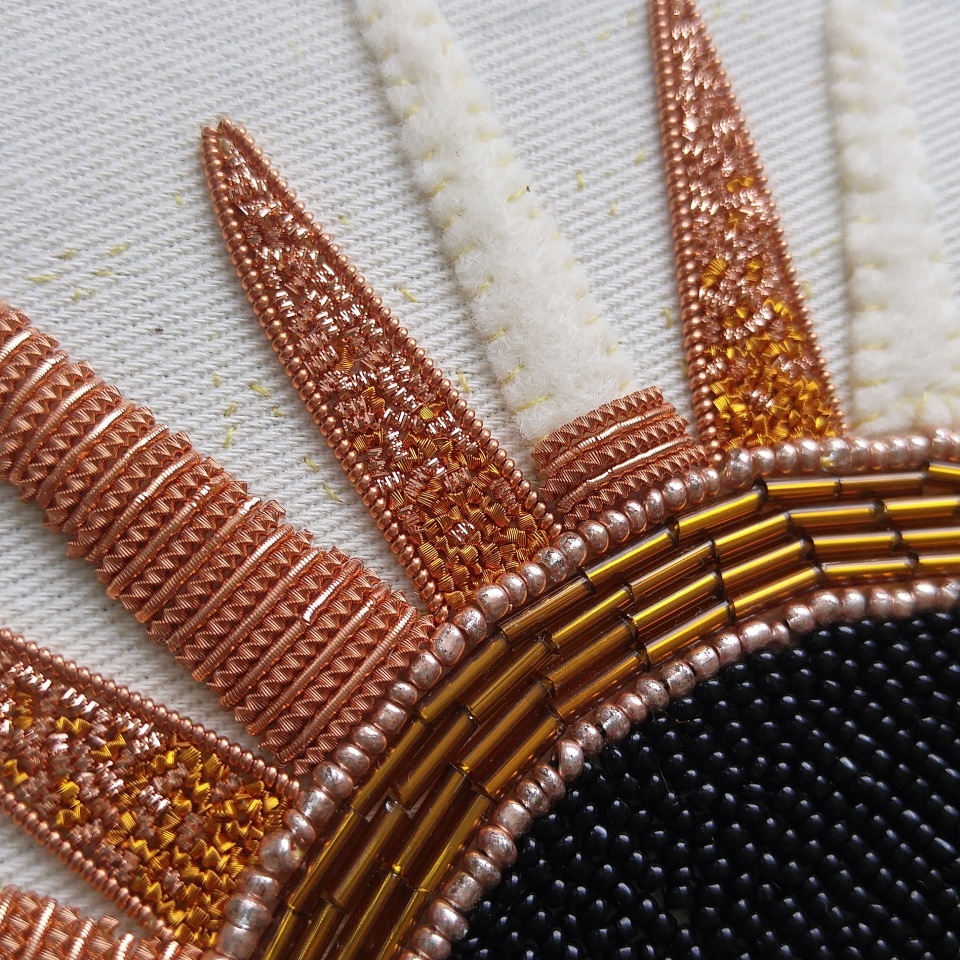 Again I was worried about the two tones clashing but was actually quite pleased with the way the bronze picked up the tone of the bugle beads.

I carried on with this ombre motif with the infilling of bronze and black 3mm sequins. 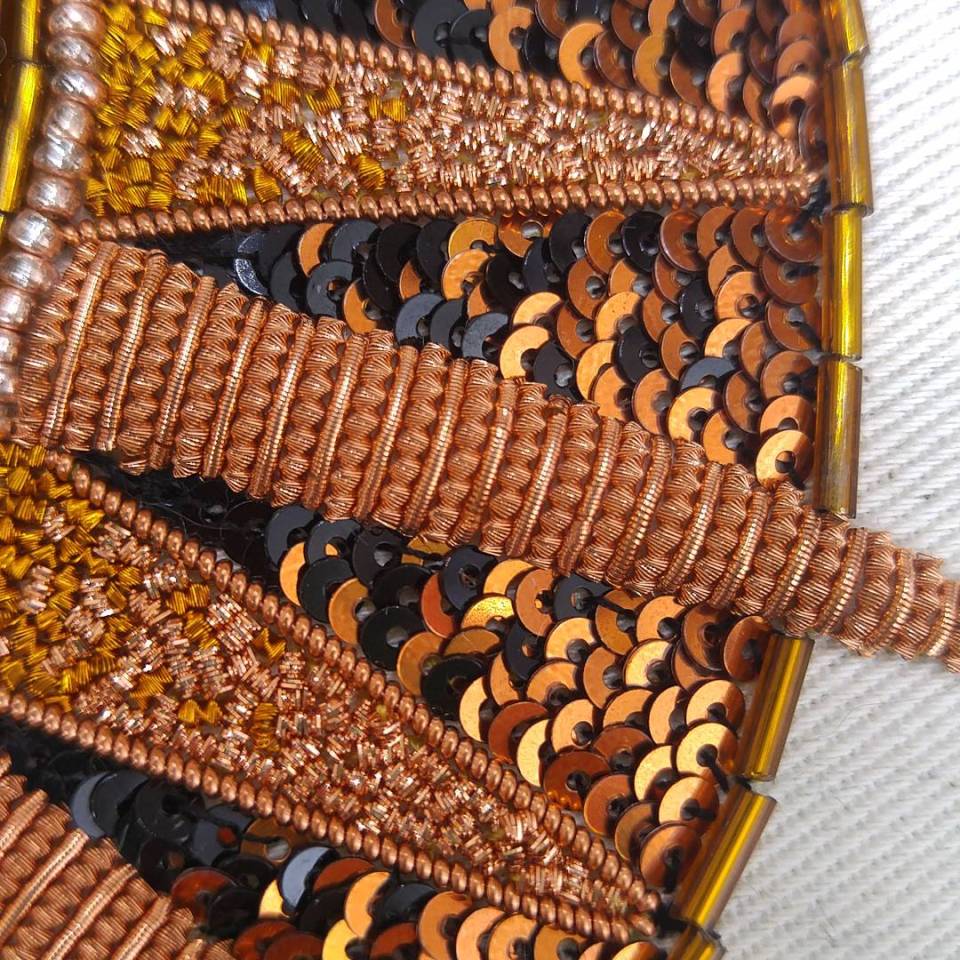 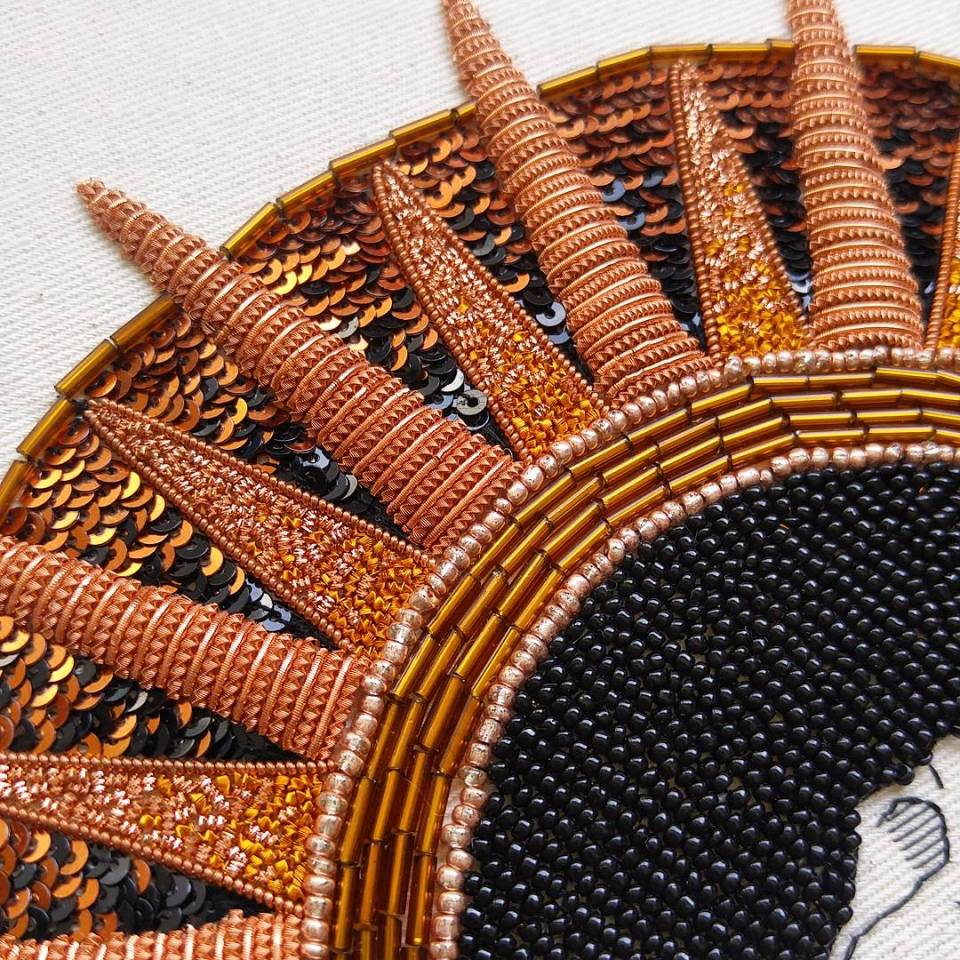 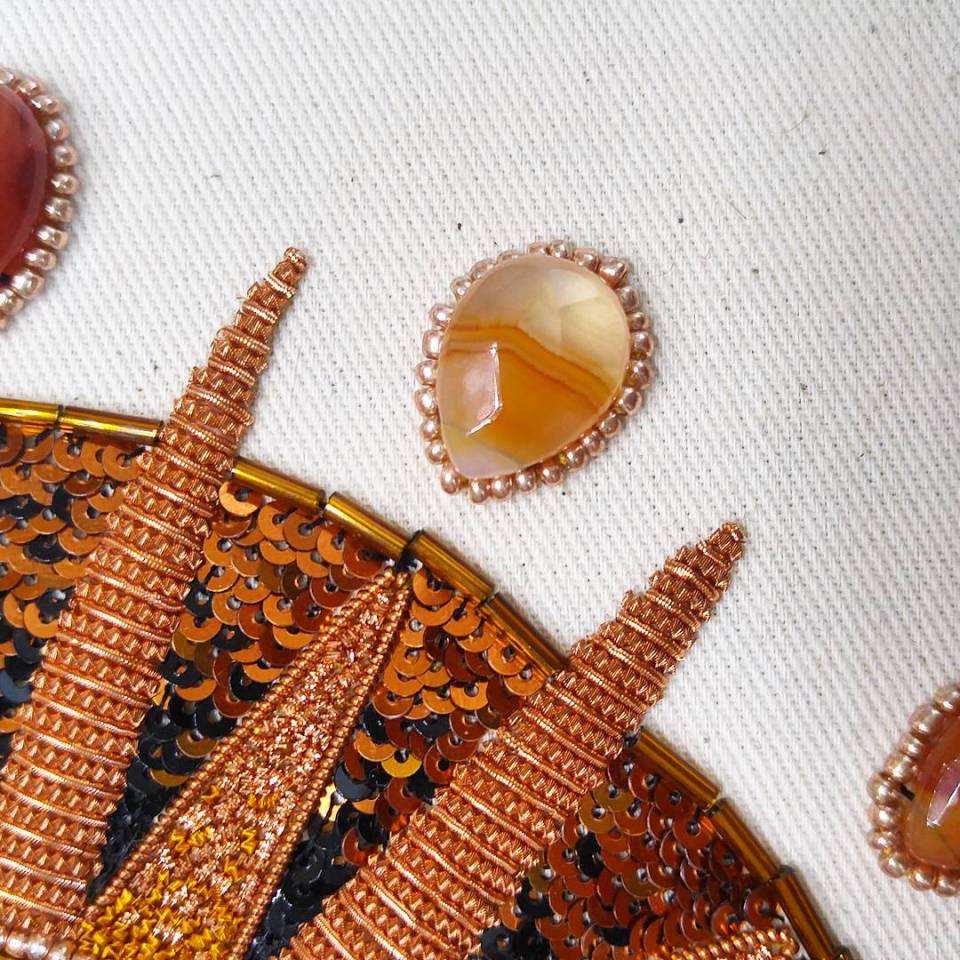 Although I fretted about the apparent lack of symbolism in this piece as compared to the others, out of curiosity I looked up where Carnelian comes from, and was pleased to find one of its sources is Tasmania.

Knowing the obvious great stretches of time it takes for the earth to ‘grow’ these minerals, I felt quite moved when considering the (albeit remote) possibility that these carnelians could have come from Tasmania, and could have been in the ground when Thylacines still roamed wild there. 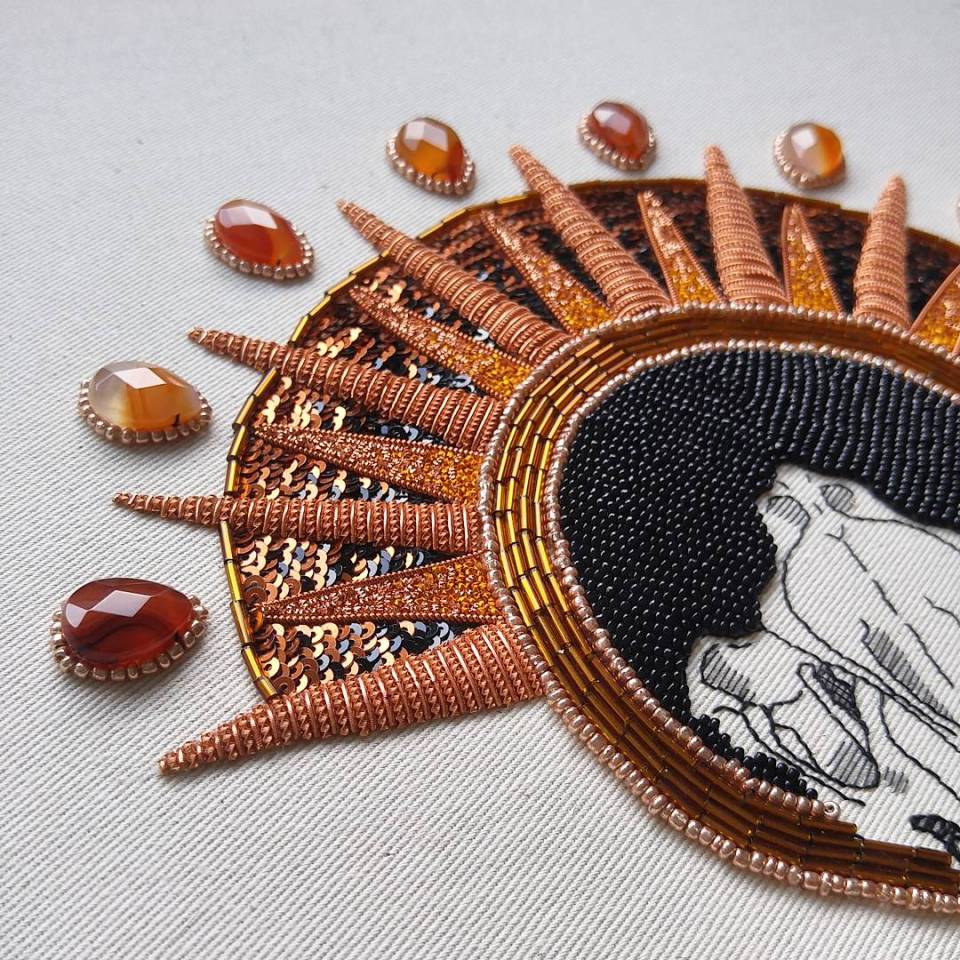 \\ Saint Benjamin //
The Thylacine was the largest known carnivorous marsupial, and the last member of the family Thylacinidae. Also known as the Tasmanian Tiger or Wolf, it was a shy, nocturnal creature similar to a medium/large dog except for it’s pouch and dark tiger stripes on its back.
Intensive hunting encouraged by bounties, combined with the introduction of dogs and human encroachment into its habitat wiped them out in 1930.
The last captive Thylacine, Benjamin, lived in the Hobart Zoo for 3 years. He died on 7th September 1936 as a result of neglect – locked out of his sleeping quarters, he succumbed to exposure. Last year (2016) was the 80th anniversary of the loss of this species. 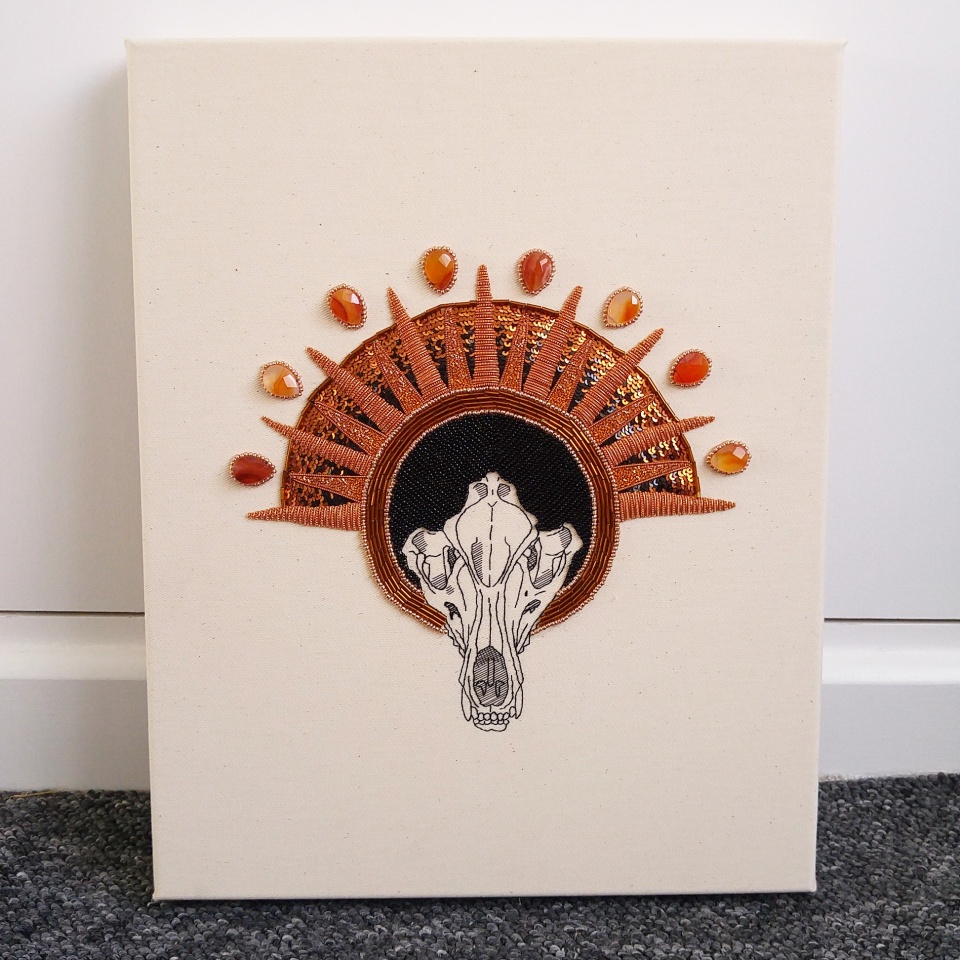 I now have poster prints and art-cards available of this series in my Etsy shop. The Witch of St Kilda poster is already sold out so be quick if you want to grab anything!