This was my least enjoyable icon to make, only because I made decisions that involved a lot of tedium and repetition.

It’s humorous as I write that though to think that this is possibly the Icon that most people seem to find most impressive, so I smile inwardly that it is in the spirit of the martyr that I toiled over Saint Celia to create something people find quite enthralling.

As you can see, she started as they all have, the skull already taking many hours more with the lines of the horn. I then padded the 5 stars ready for the goldwork later.

I initially outlined the halo in black beads but removed it later. This is the start of one torture self inflicted – those are 2mm sequins, each one hand sewn.

I made it bearable for myself by alternating techniques: The sequins, the goldwork chipping on the stars, and those lovely inky oily bugle beads on the interior. 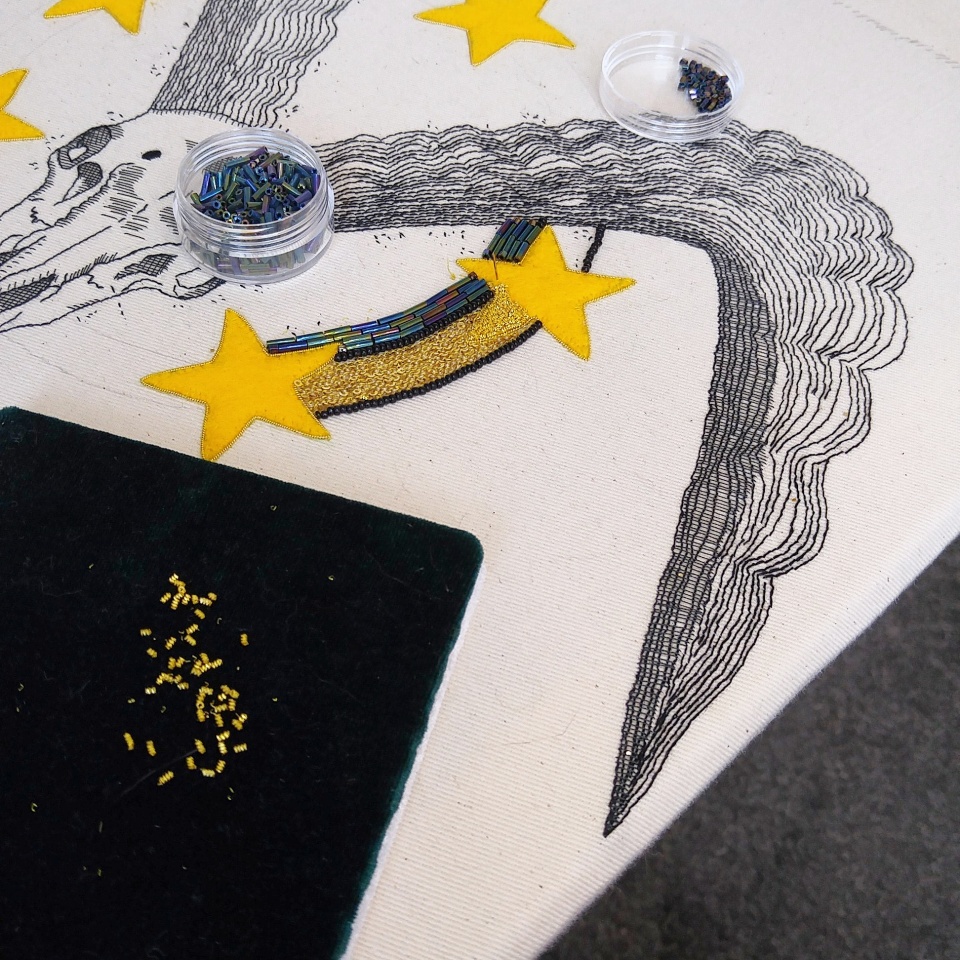 I did agonise over those bugles until the end, worrying that the rainbow effect was too garish. Here I have also replaced the black beads with a gold bead outline.

Bugle beads have their own torture using them like this. The better quality you buy, the more equal and regular there size. This is actually counter productive here as you reach the end of a line and realise you need an irregular length. Thank heaven for broken chips and poor quality control.

Did I mention I also chose one of the smallest sizes of bright gold check to complete the chipping? Truly she inspired some sort of pilgrimage. 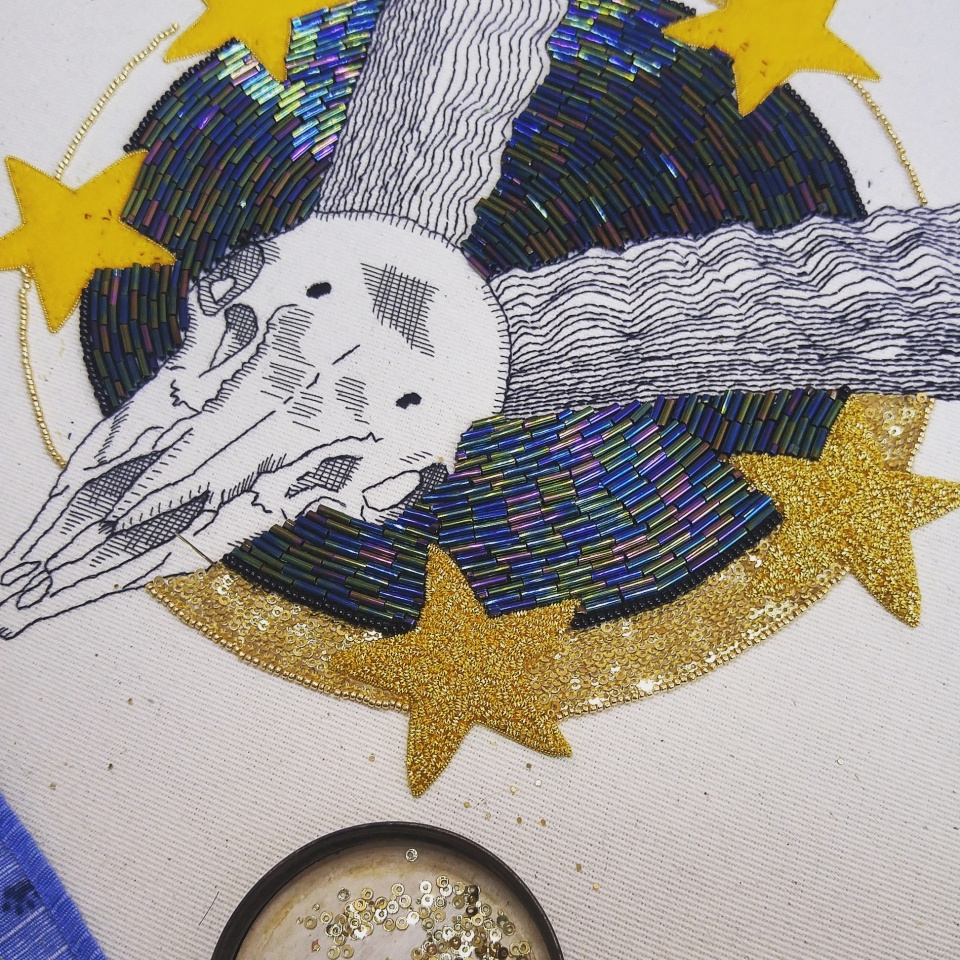 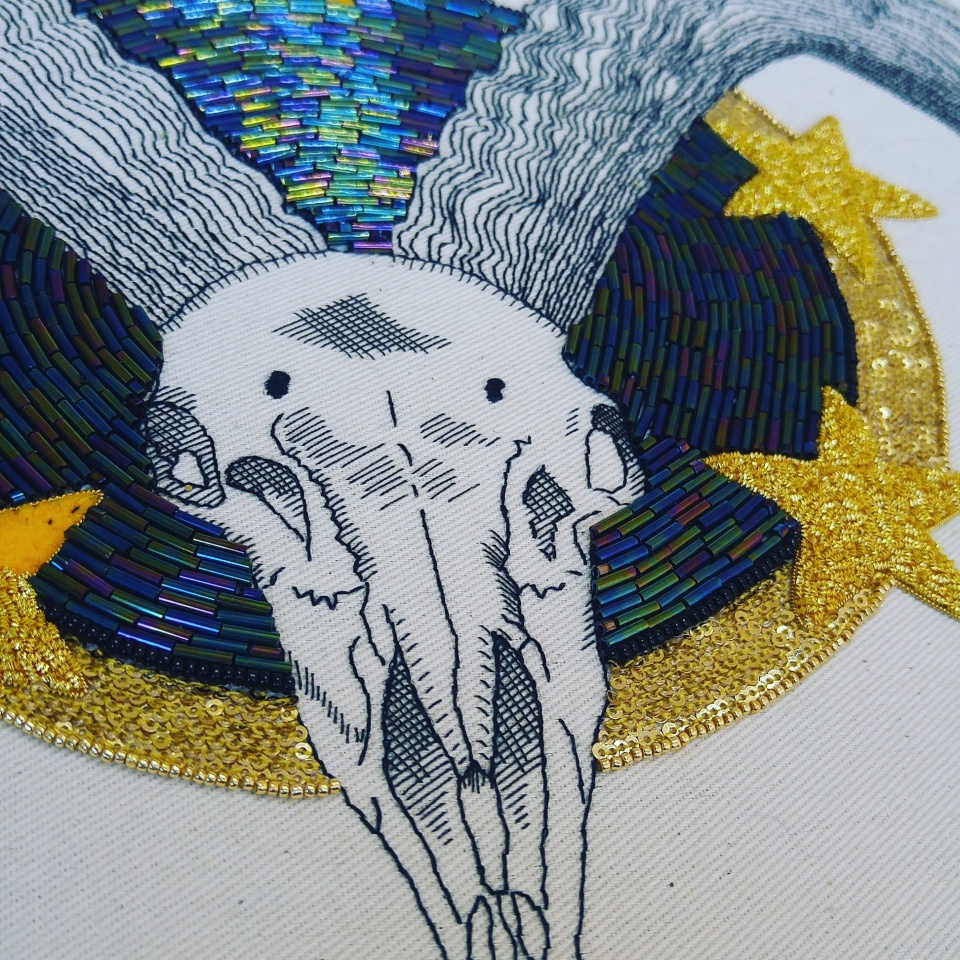 We approached some sort of conclusion. 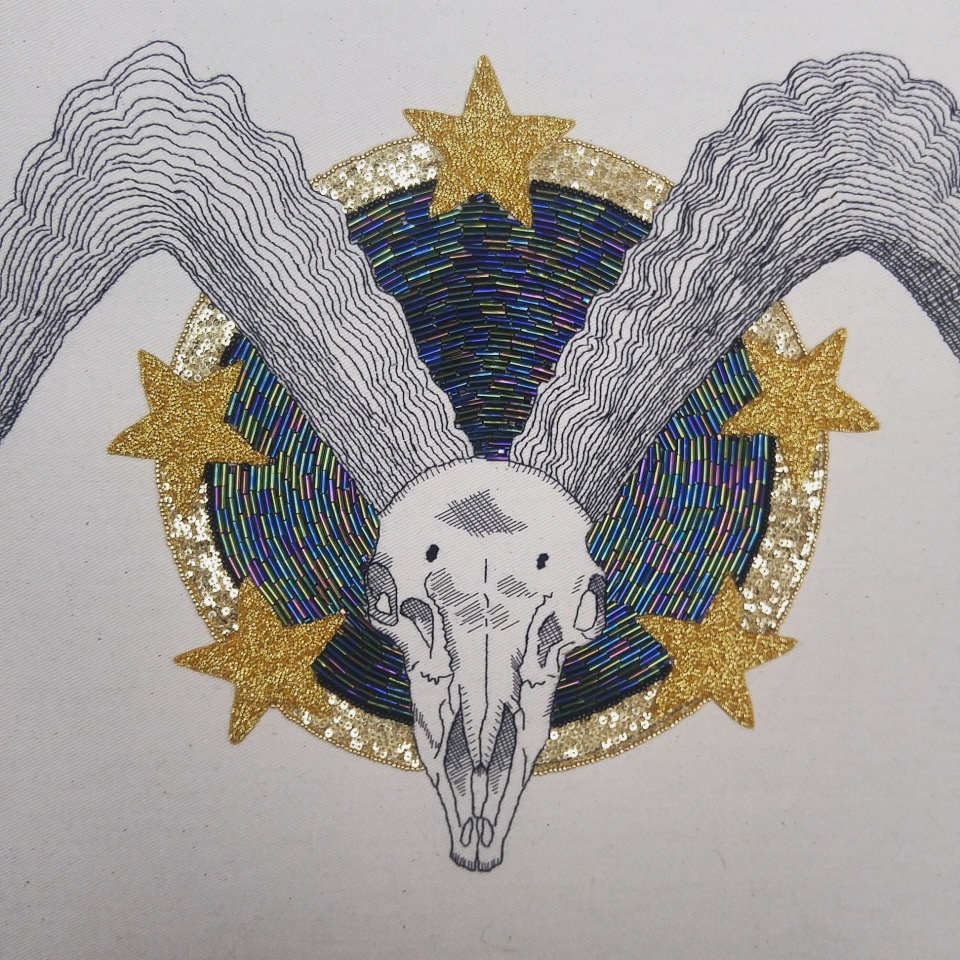 Finally, I crowned her in a little laurel wreath of alpine herbs, made variously of velvet and embroidered slips.

I also surprised myself with these little flower sequins, thinking them to be quite tacky but actually they worked beautifully here and I think sets the whole piece off nicely.

FINALLY finally, I added yet more gold, in a foil-lined bugle corona.

The whole thing took me about 49 hours, nearly 15 more hours than other work in this series. Basically 15 hours + doing all the tedious tiny gold sparkles. I was very unsure about some of my choices and thought I’d put a lot of time into something pretty monotone. But I’ve learnt it’s often the way, that not until the final bead or stitch is placed, do I really see the whole piece and can change my point of view. I wanted to crown him (with those horns, Celia is a male I’m afraid) with small foliage I imagined might be like the alpine herbs he liked to eat, these stumpwork details tie everything together. The crown of stars is also known as the crown of immortality in religious iconography, and I like the idea that this reflects the Ibex’s unique position as being ‘resurrected’:

The Pyrenean Ibex was a type of Iberian wild mountain goat, most common in southern France and the northern Pyrenees. They were quite abundant until the 14th century, and by 1900 their numbers had dwindled to fewer than 100 due to hunting pressure, and competition with domestic farm animals.
The last individual, a female named Celia, was found dead in 2000, apparently killed by a fallen tree.
The Pyrenean ibex is the only species to become extinct twice. In 2003 scientists cloned a female, who survived for several minutes before dieing from lung defects.