Despite being a worldwide character in folklore, there’s not that much plant lore associated with Fox, except the obvious Foxglove. I have avoided making a foxglove for a long time. 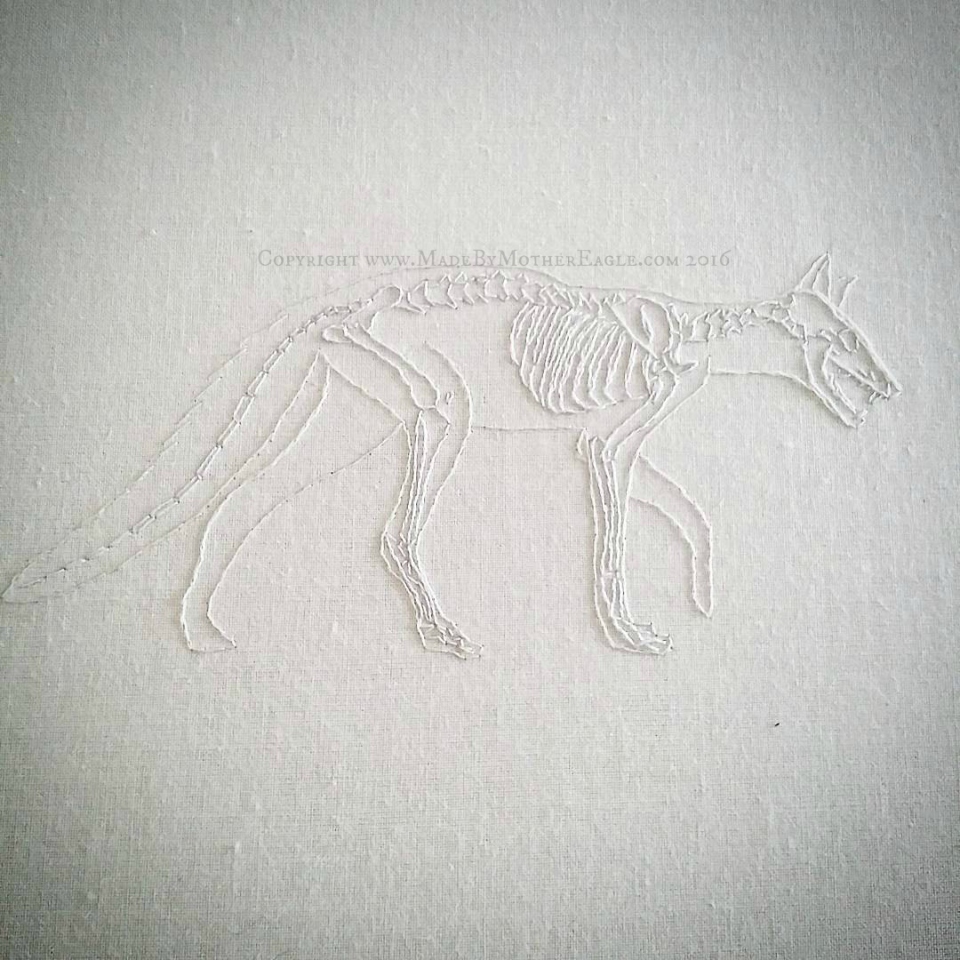 With a bit of diligent research, Holly seemed an appropriate partner. I will explain. 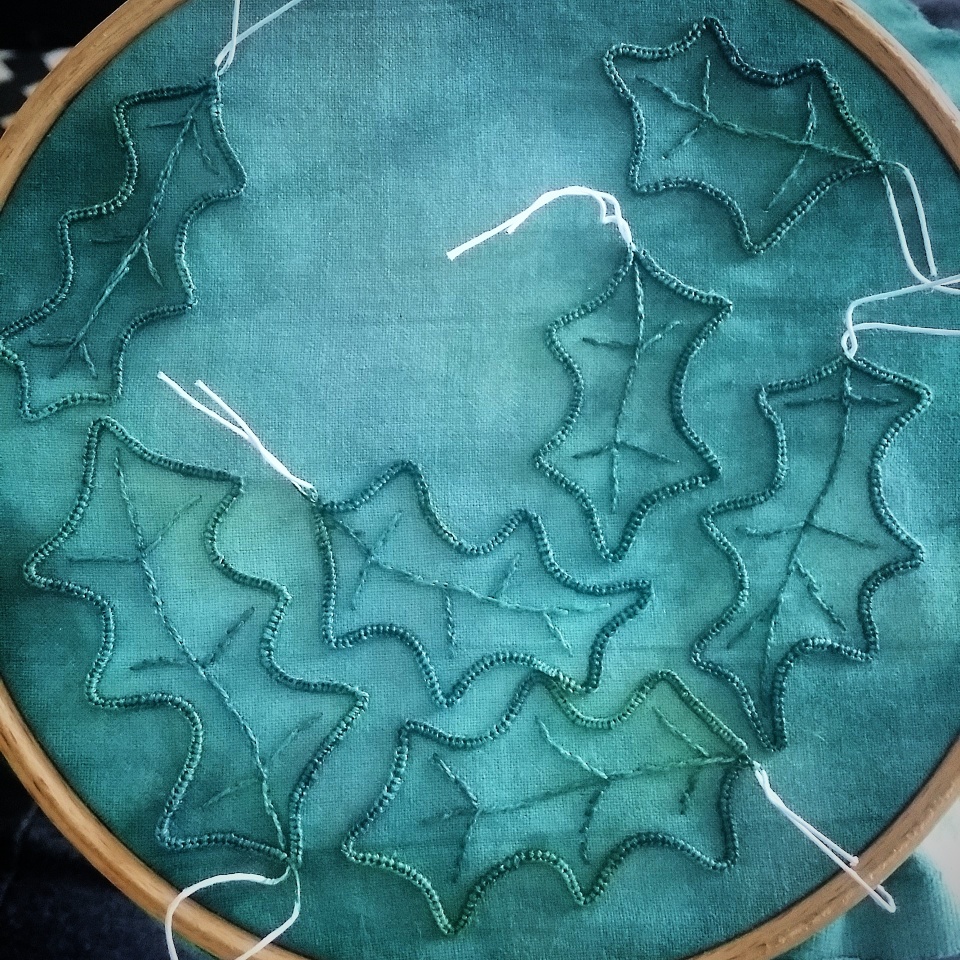 Thanks you, my nails are fabulous. 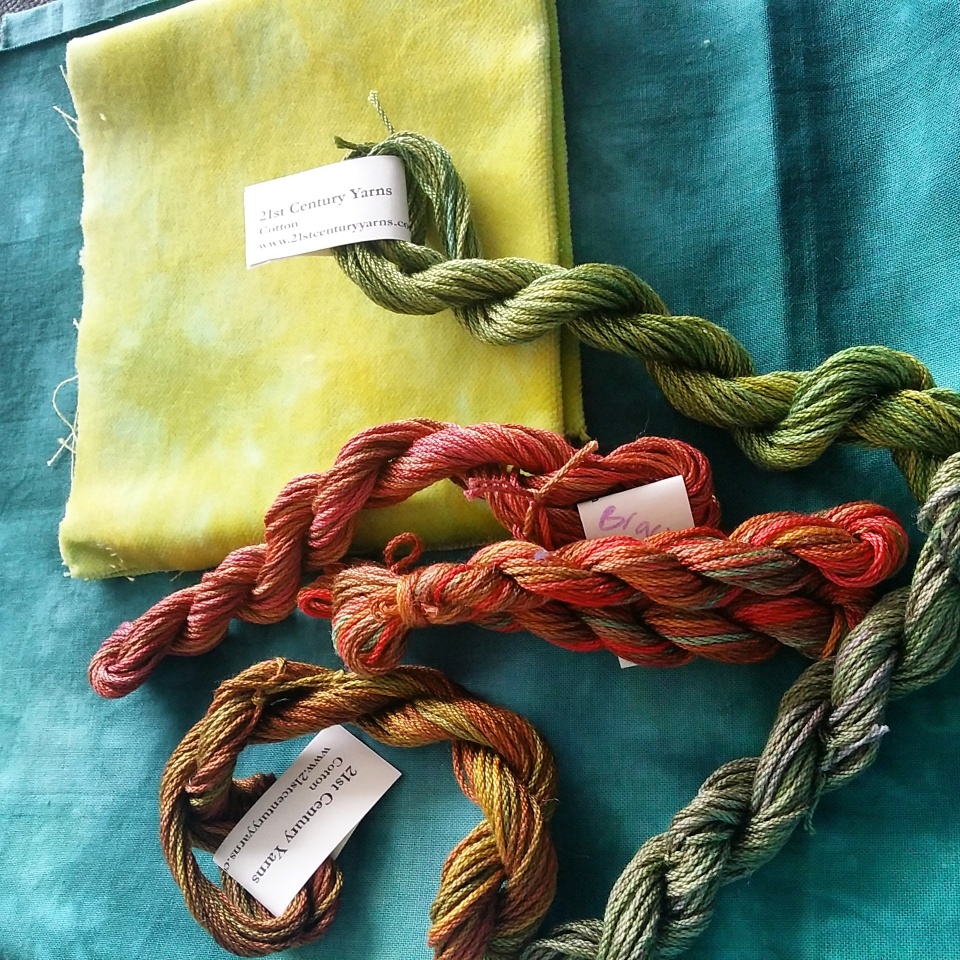 Bought some new bits for this one. Didn’t want to do two velvets for the leaves so tried out 21st Century Yarn’s space dyed cotton for the holly leaves and this lovely chartreuse velvet for the foxglove leaves. 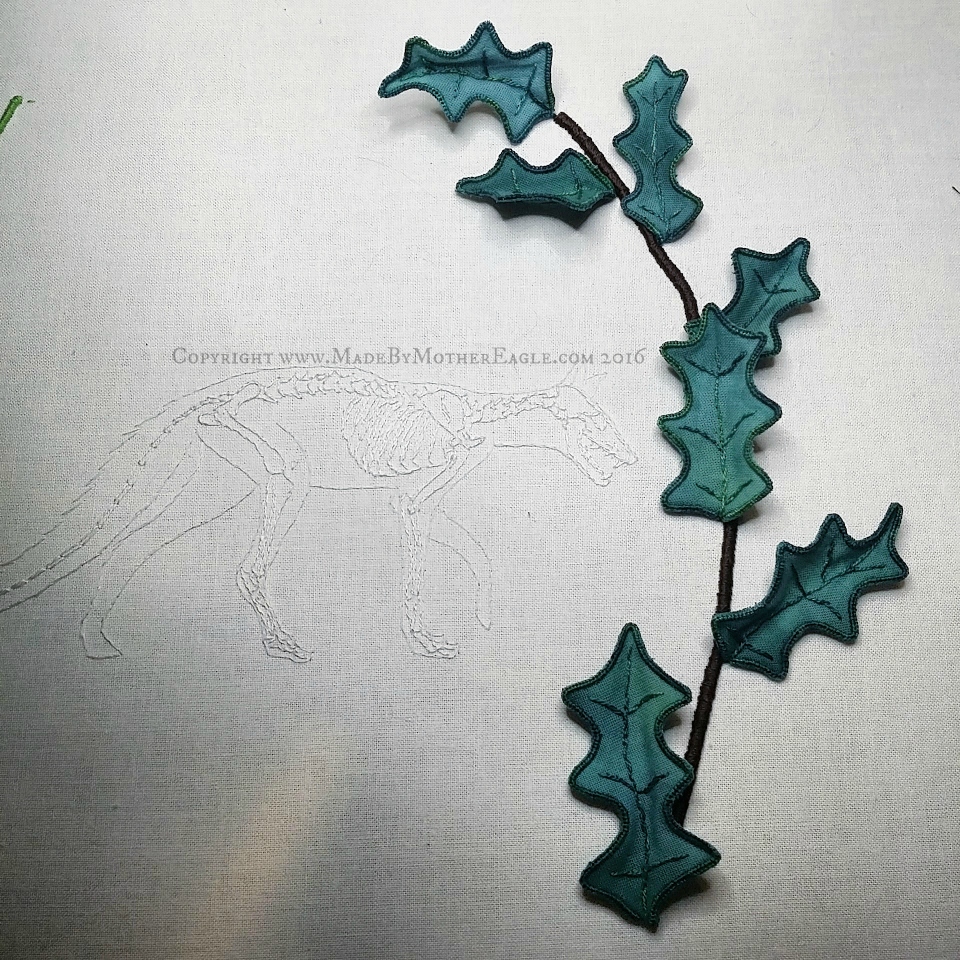 FYI Holly leaves were supremely tricky to make convincing shapes out of wire.

It’s another game of spot the fake berries (hint: they all are).

Next for something completely different.

Now to my nemesis. 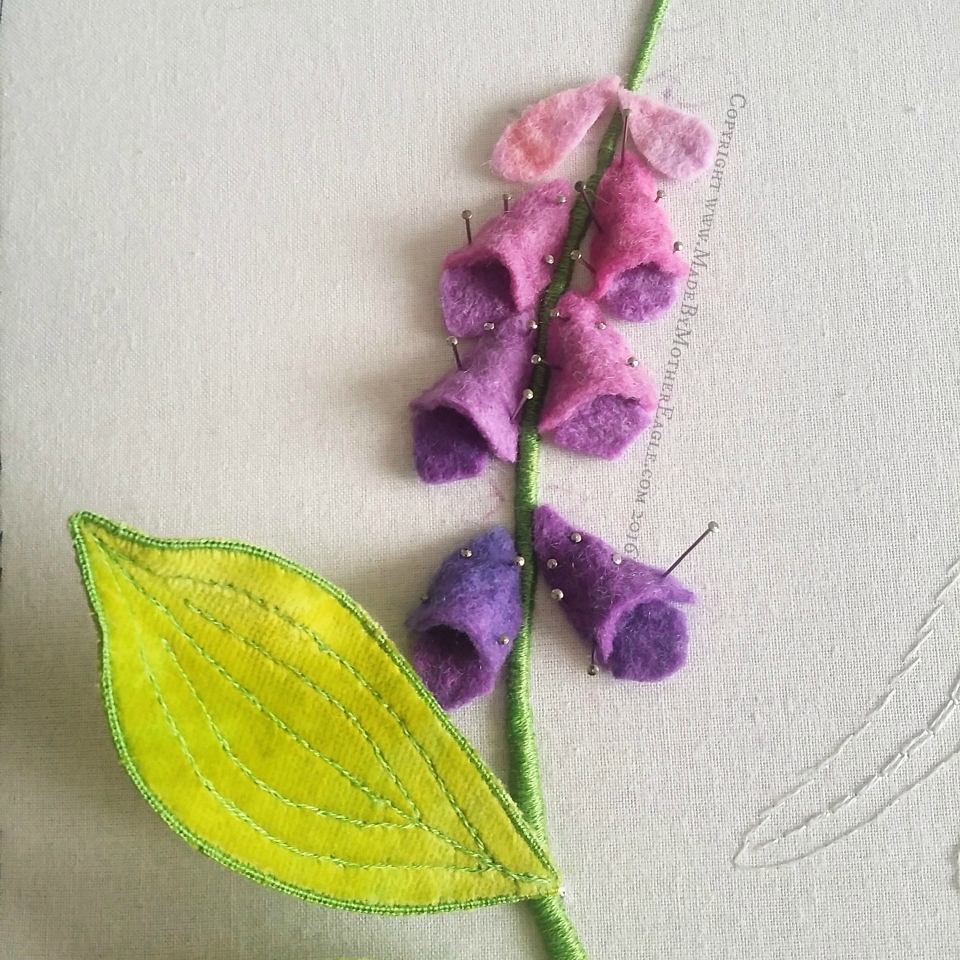 Honestly this was probably the trickiest thing I’ve ever done and it isn’t even stitched down yet. Trying to figure what shape made the little cones sounds easy (sort of semi circle right?) but I was trimming these bastards for ages. 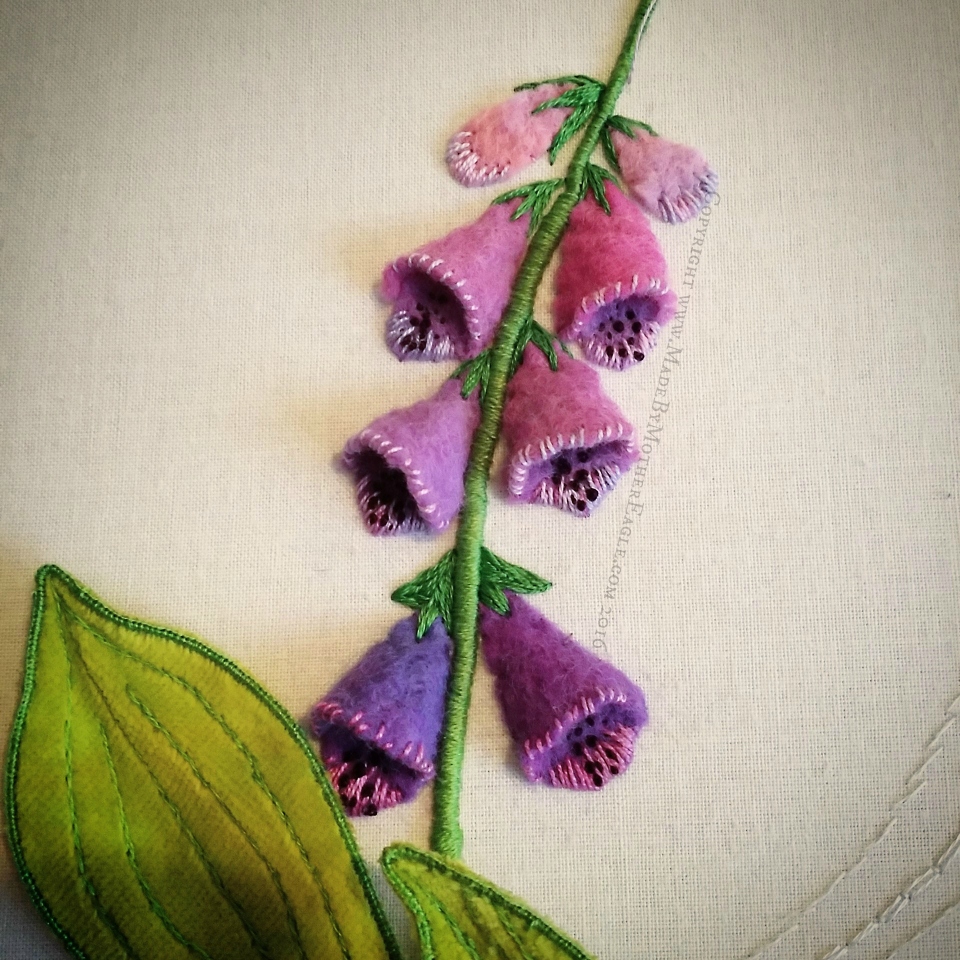 As you can see there’s some french knots going on and other little flourishes to make them more foxglovey. I still felt a bit meh about them. I still do about the piece generally to be honest.

In all traditional or pagan cultures, there exists Fox mythology. Although it varies over the world, the prevailing character of the fox is adaptability and duality: a survivor. In Japan there are two kinds of foxes depicted in folklore. The cunning, shape-shifting witch-animal trickster, and the intelligent long lived bringer of good fortune with magical abilities.
Fox is graceful and wise, knowing when to be silent and when to reveal herself. The word cunning, meaning sly and crafty, and the word kenning meaning to know or to see, come from the same Old English root. So although Fox appears sly, in fact she is knowing and in possession of clear vision. Our ancestors recognised the fox’s quality as positive rather than negative, and prized him as sacred. Many Neolithic and iron age ritual burial sites contained Fox remains, along with Deer and Bear.
Fox is wildness and wilderness. Fox is nocturnal.
Like Wolf, Fox is also associated with transformation. Scavengers, they have the ability to turn what they have into what they need. It’s transformative properties also brings the symbolic fire. The Fox-fire, or ghost-fire is said to come from the magical pearl carried in its head. The rune Nauthiz represents this here, the ‘cosmic need-fire’, and the shadow self.
Foxglove has the power to heal or harm. Legend has it foxes wore the flowers on their paws to stay silent when raiding the chicken coop. Representing the duality of Fox, an old saying is “it can raise the dead or kill the living”.
Also associated with fire and protection (in this context, concealment) is holly. In Celtic mythology the Holly king rules winter, and in this composition you can see the bright foxglove thriving in spring and summer, and the dark holly winter – the Fox adapts and survives throughout.