I wasn’t feeling all that enthusiastic about the next 5 Ritual Burial pieces at this point. I was half way through and I basically couldn’t choose so I threw it out to my Instagram followers to do it for me. Otter was voted for. Social media can be a wonderful thing. 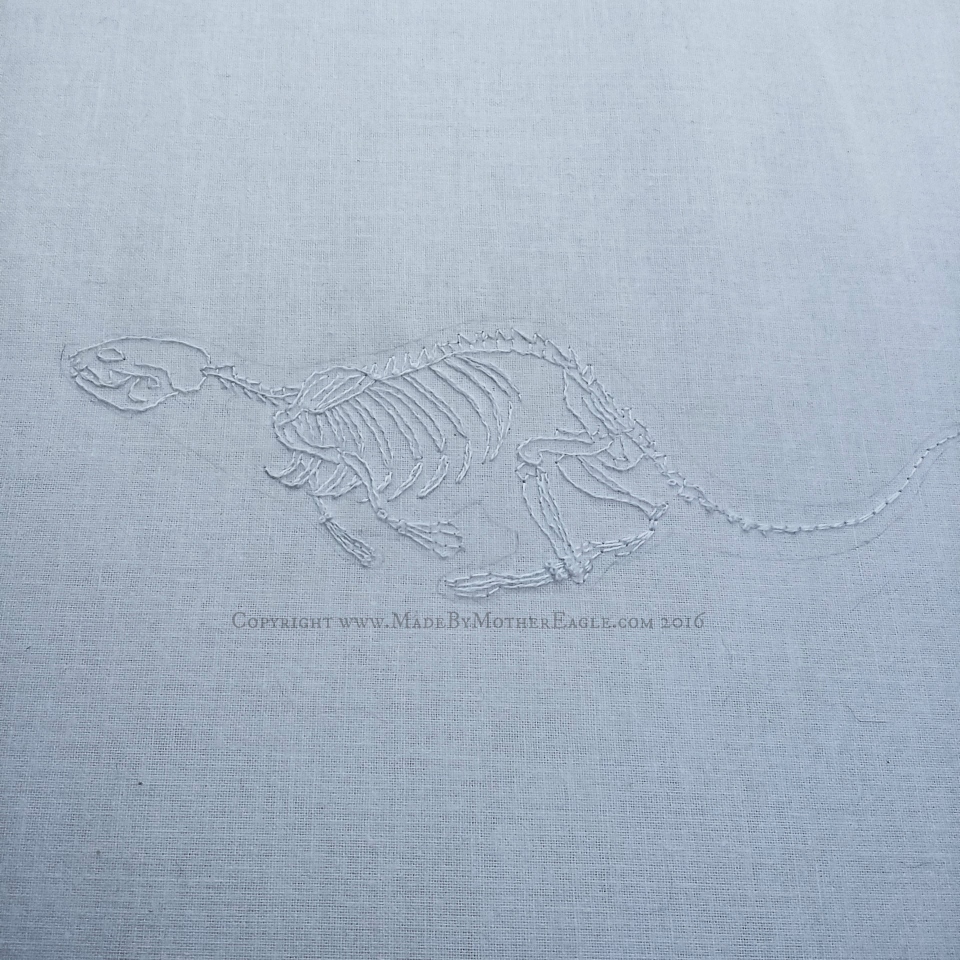 At the design phase I had struggled a bit with the composition. Undoubtedly Otter is one of the significant animals of the Druids but I couldn’t immediately find plants or symbols that went with him. In the end it was the strong connection to water, and all that element’s strong symbolism that led me to ferns as the flanking magical plants. 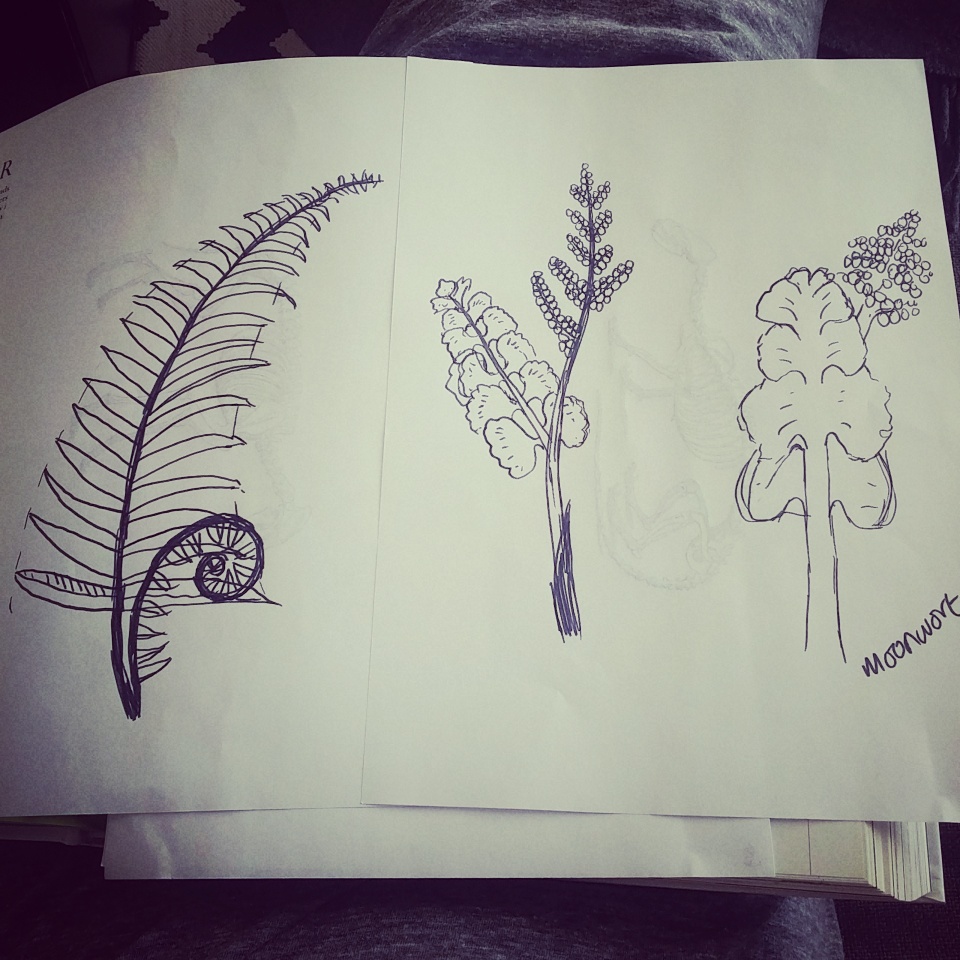 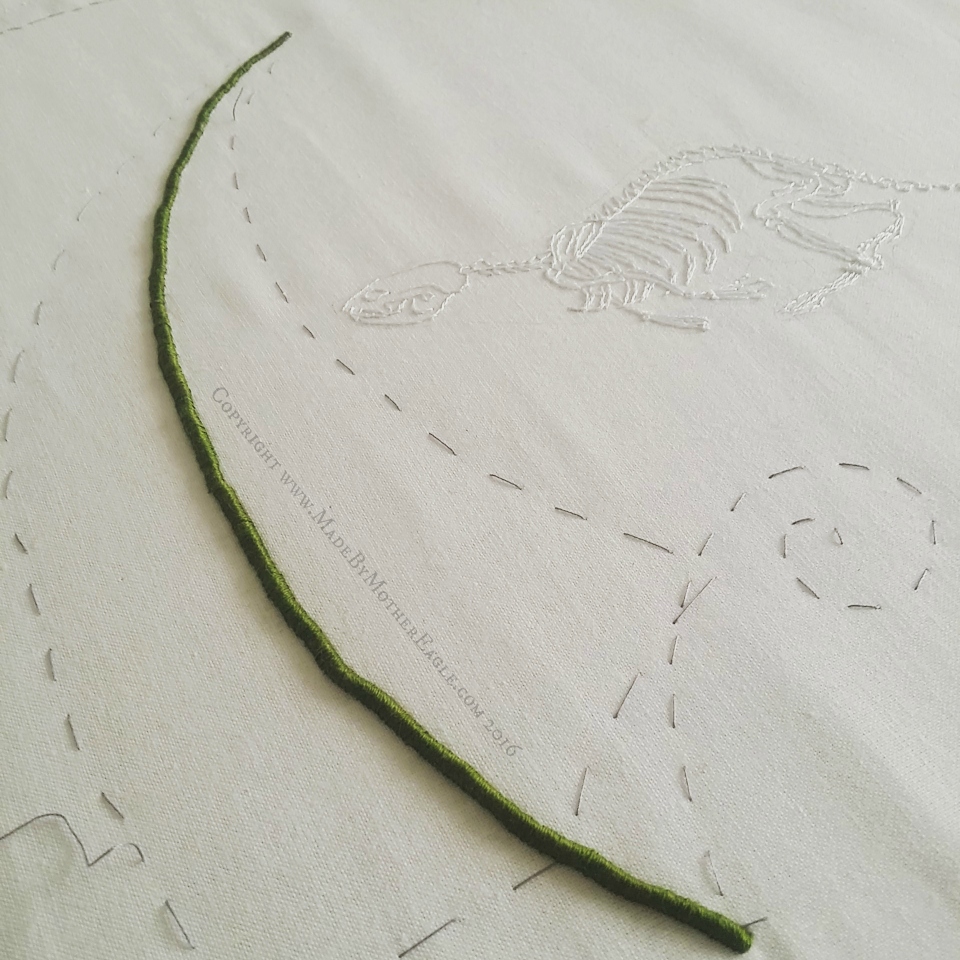 I was really excited to embroider a fern. They are probably my second favourite flora after mushrooms. I began with marking out the shape in tacking and couching a gradually thinning cord to make the spine of a classic Fiddlehead fern.

I knew I wanted to experiment with decorative stitches for the leaves so had a little practice first. 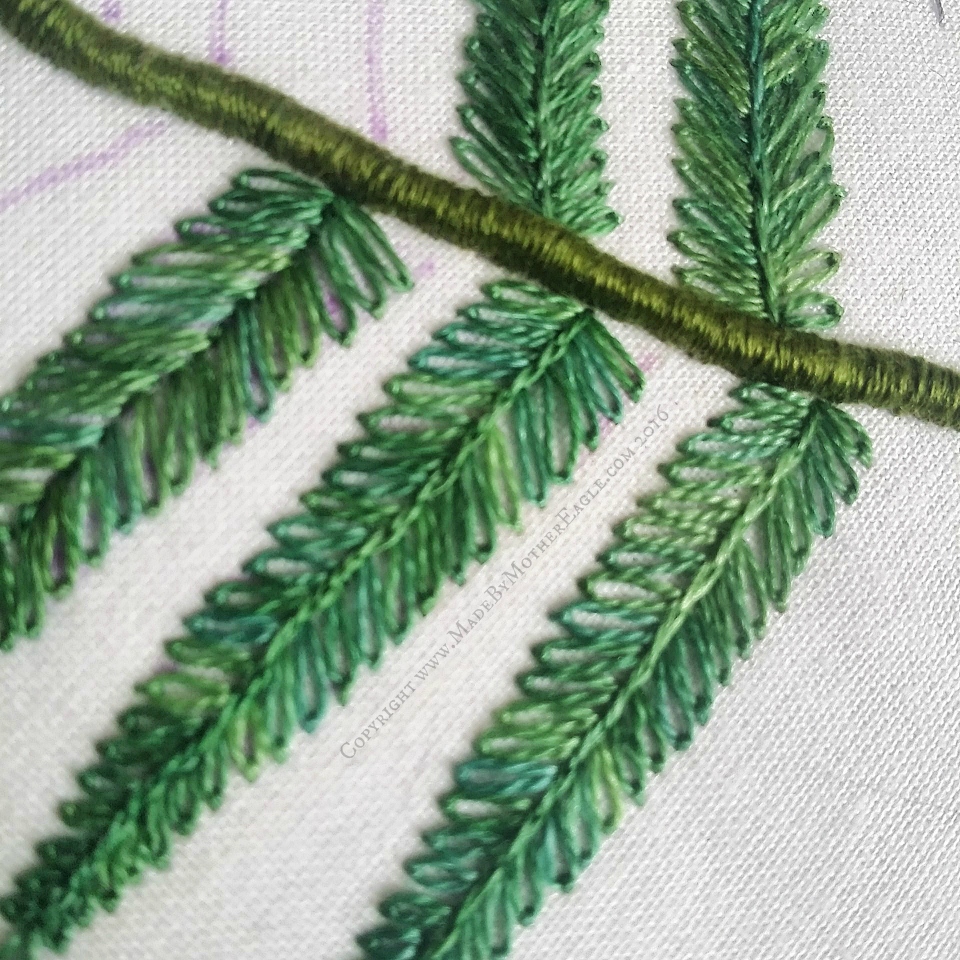 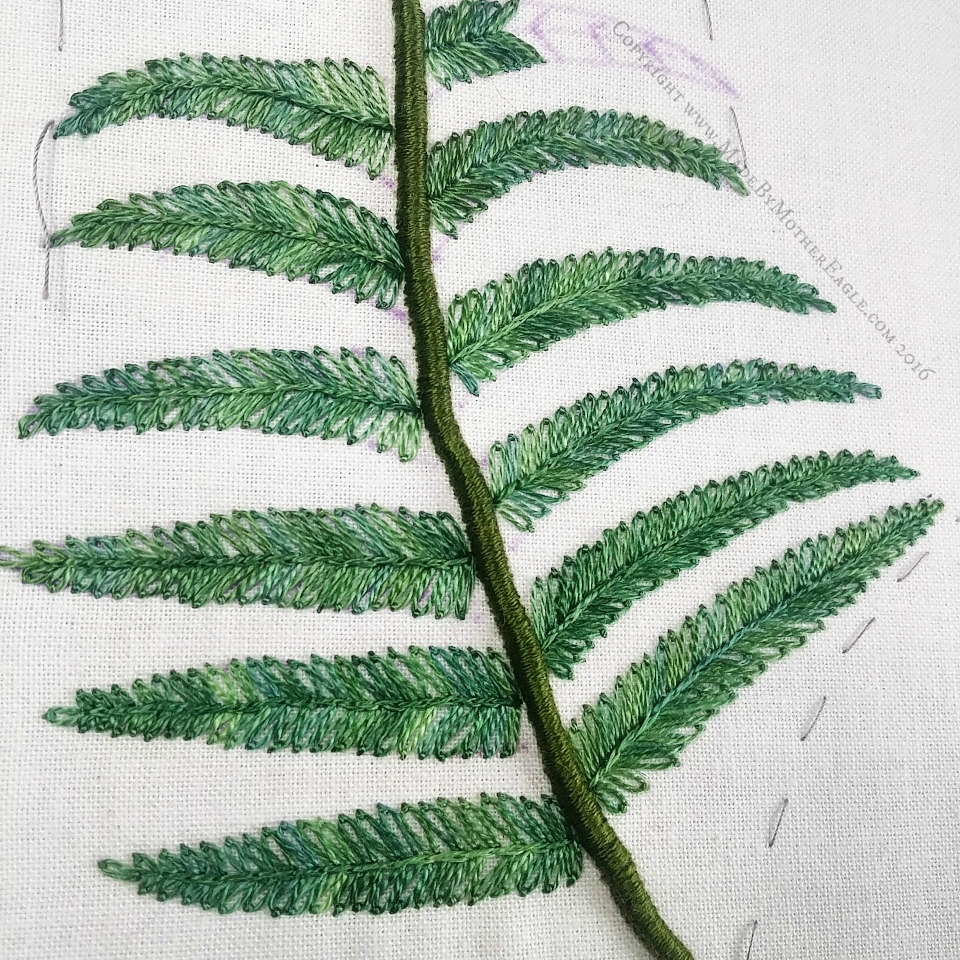 I used a lovely variegated thread for this. 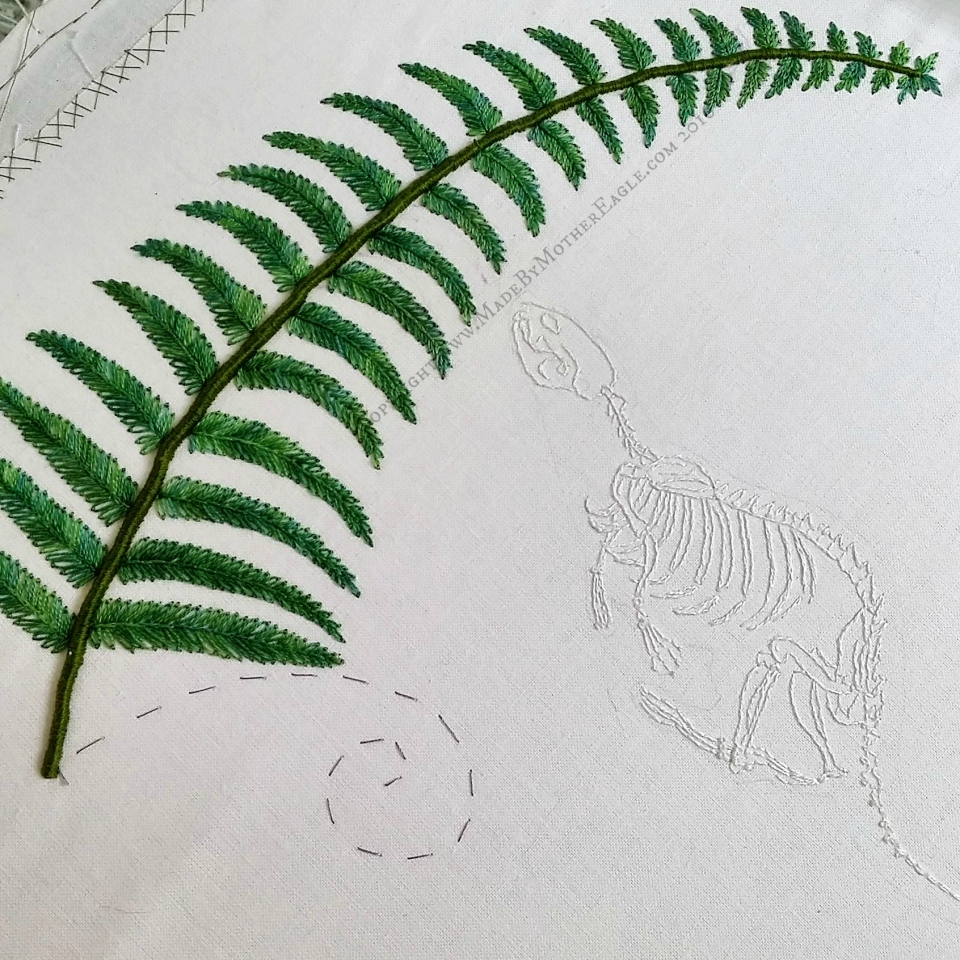 It couldn’t be a fern without a little furl so I followed the same method to make a curly wurly next to it. 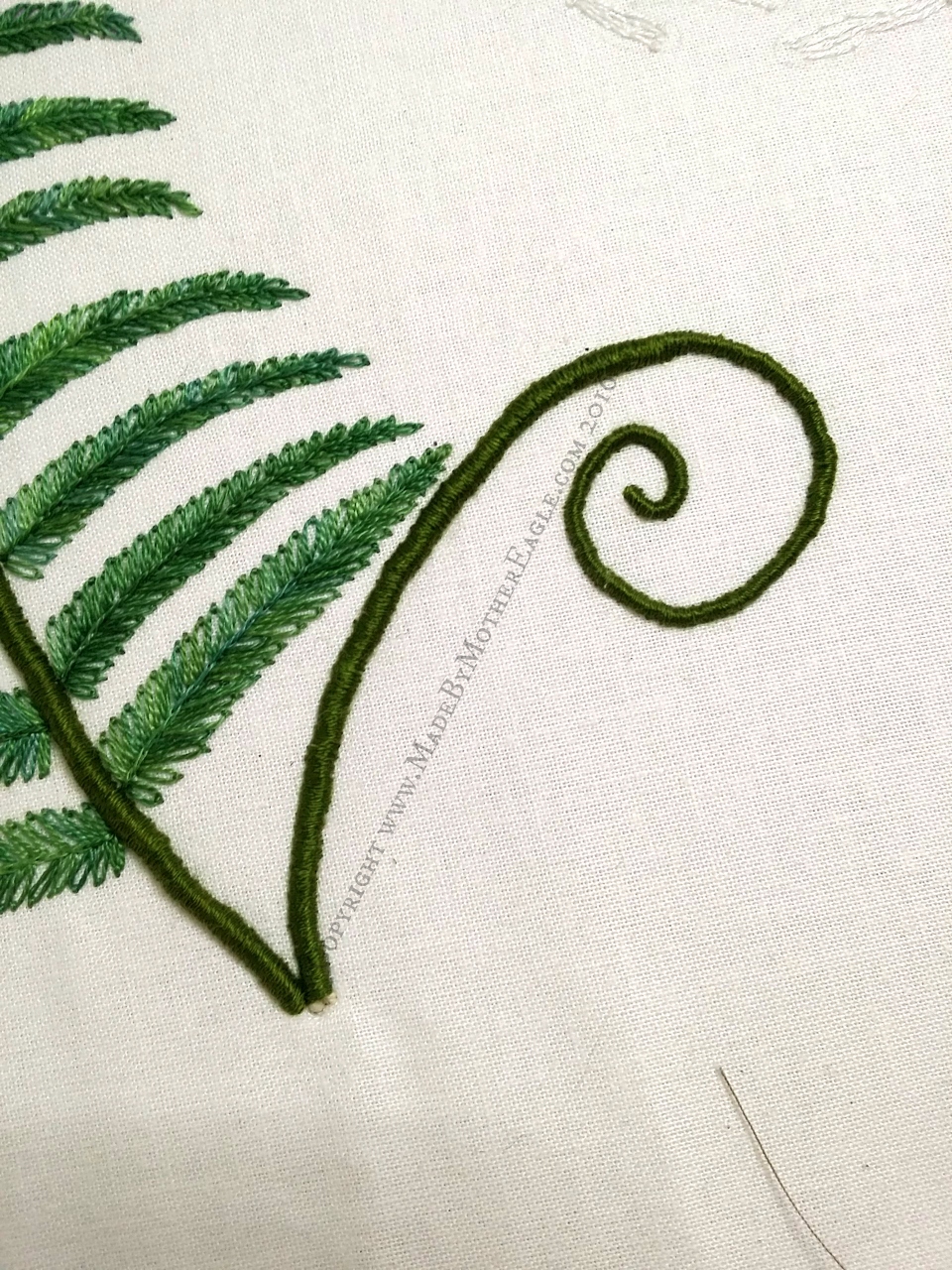 I didn’t actually take a photo of the little detached picots I used to make the leaves for this bit, but there’s a video on my Instagram. 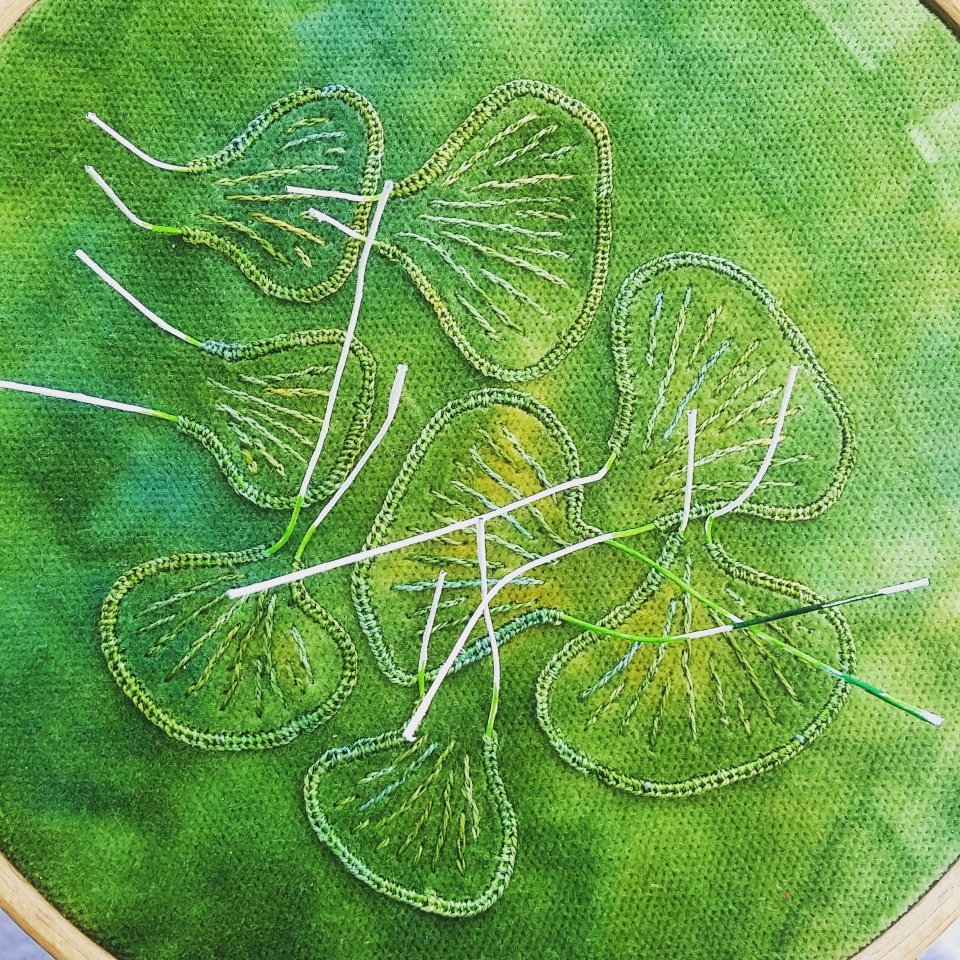 OK, so next things got weird. I did hesitate slightly with this fern, the quite rare Moonwort fern. It is so odd, so unlike ferns that I both loved it and worried it would just look weird in the composition. Great! I decided, and made these leaves out of velvet.

I’ll show you a photo of the real thing in a minute, if you’ve never seen one before. They look just like this but you be the judge. Like before I couched down some cord. I also got super excited to use beads for its little, well I suppose you’d call them pods. I pinned them in place first to make sure I was happy, then I stitched them all down. 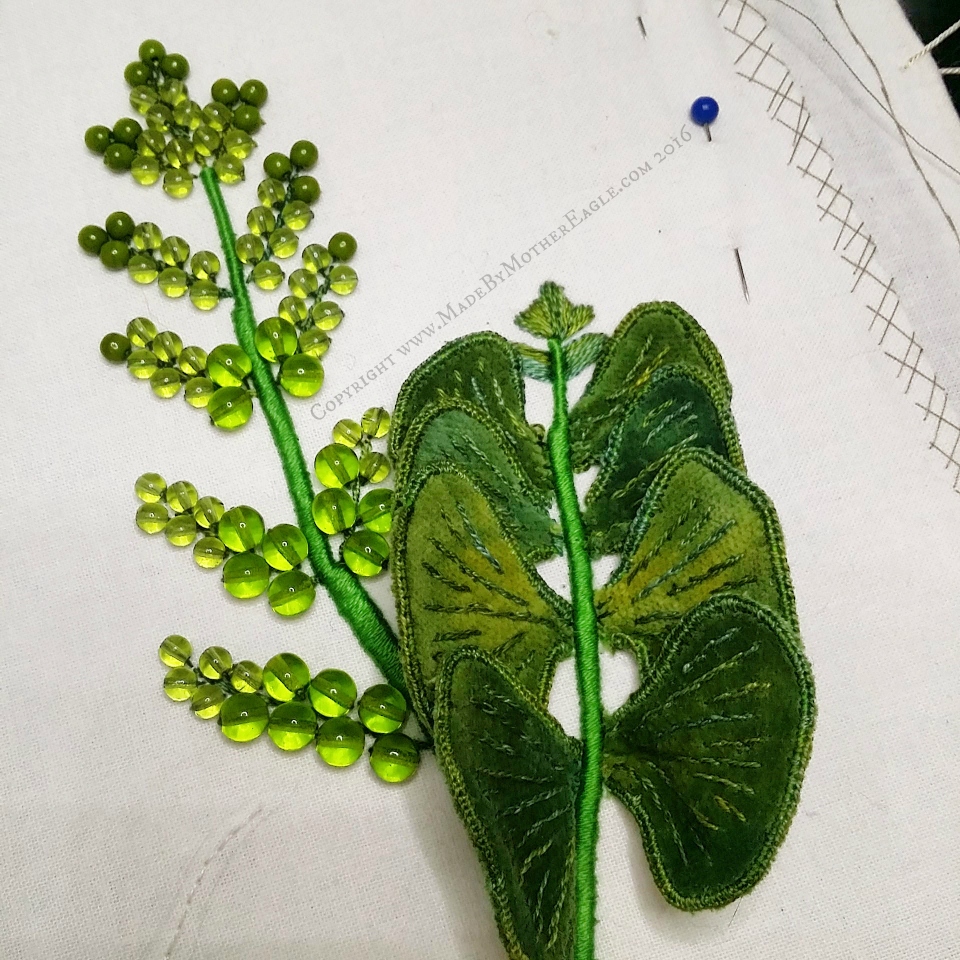 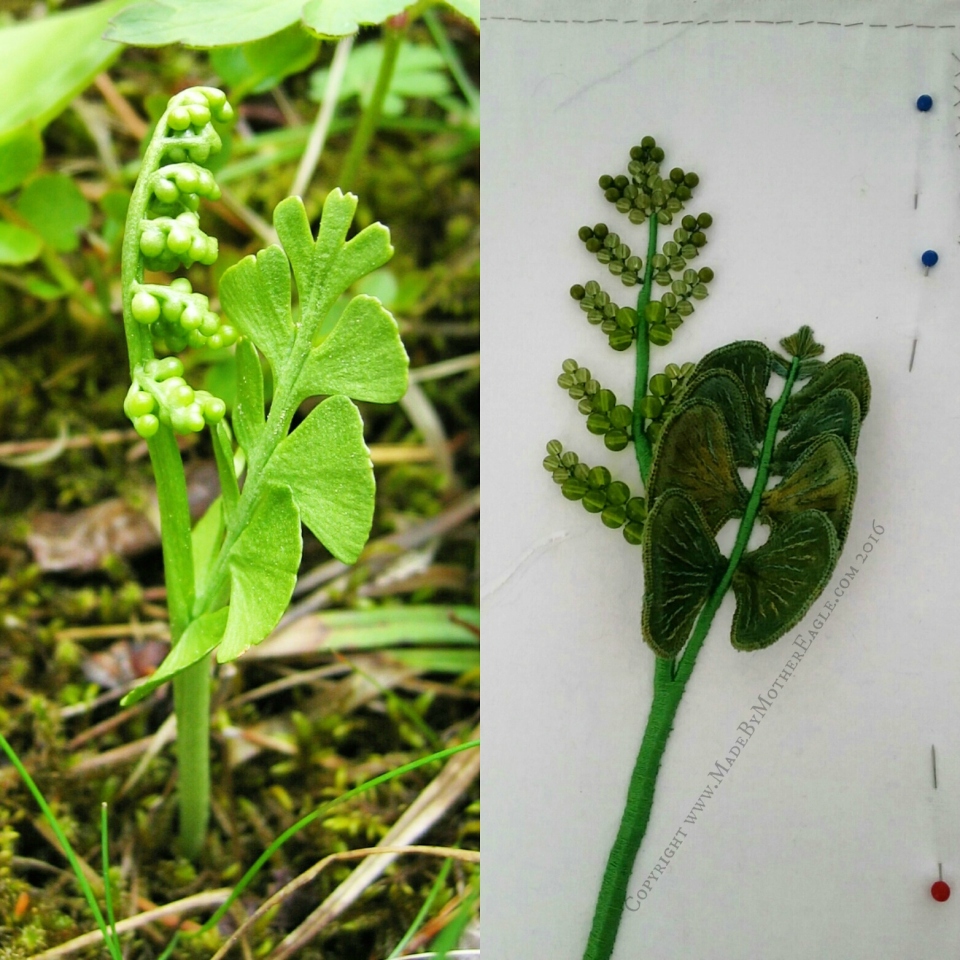 So weird huh? Botrychium lunaria is one of the strangest, rarest and most ancient ferns. I want to fill my garden with them.

Moonwort was believed to have a strong effect on metal: it was once believed that it could unlock a door if inserted in a keyhole, and draw nails from the shoes of any horse that trod in it.

Look there’s the little leaves made from detached woven picots on the first fern.

Made a little leaf to add to the Moonwort.

So that’s the ferns done. Next Otter needs his magical jewel of power, so I stuck it on with fabric glue. But I mucked it up so had to add some french knots to hide the glue splodge.

Worked out though didn’t it? Looks nice.

Here it is, and I added the elemental symbol for water and also the rune Wunjo.

The Otter stands for joy, playfulness, and helpfulness. The cubs stay longer with their parents than most other animals and when an otter dies, it’s mate will mourn for a long time. Because of this Otter also represents family, and bonds. Incredibly magical, the Otter is at home with elements of both water and earth, represented here by ferns. Dryopteris Felix mas, the male fern, and Botrychium lunaria, the Moonwort fern, representing the female, lunar element. Ferns are prehistoric, ancient plants and synonymous with the earth and water, healing and magic. Like the Toad, Fox, and Snake, the Otter is said to carry a secret power object – a magical jewel within its head. Otter is also shown with the elemental symbol for water and the rune Wunjo, representing joy, pleasure, and kinship with those the same. 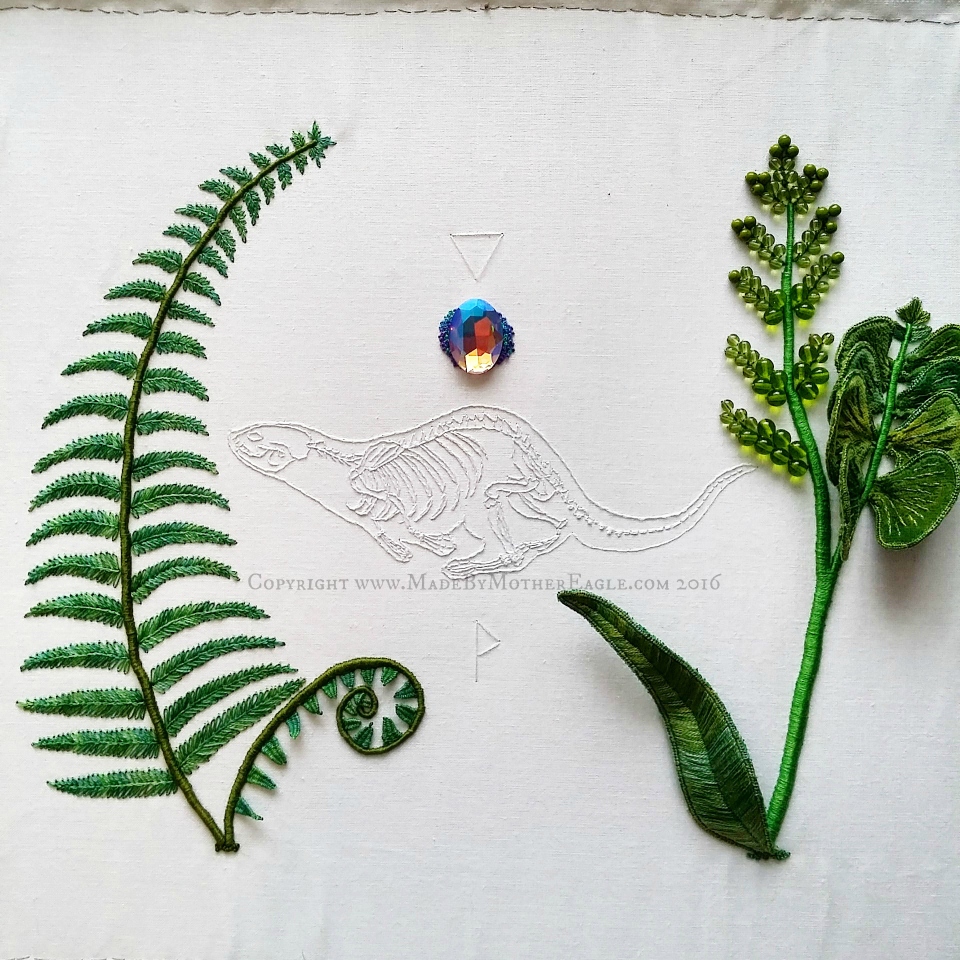