This was my fourth and penultimate ‘Ugly God’ in this series. Not so ‘ugly’ to some, not compared to poor unpopular Crab, Toad and Snail but I was stretching the theme with this one to include ideas of bad omens or unluckiness.

Heads up – you’re gonna have to tolerate some pretty terrible photos in this. Part of the reason is as I am working I’m just using my camera phone to take in progress snaps. Also partly because this piece is dark threads on a dark background which the camera sees as flat, and then pale threads worked in a very smooth way which reflects the light and the camera sees as shiny. So, tricksy.

Ravens and crows are largely associated with death, showing up as carrion birds etc., and there is plenty of folklore and superstitions about what their appearance may herald. However, older legend blurs the lines between ‘negative’ and ‘positive’ as it usually does, and the raven shows up as ‘Thought ‘ and ‘Memory’ and fly all over the world to bring Odin great knowledge in the Norse Prose Edda.

The three-legged raven (actually a crow) appears in various mythologies of east Asia, and although largely represents the sun, in Japan the Yatagarasu’s appearance is construed as the will of heaven or divine intervention in human affairs.

It is mentioned a number of times in Shinto, and the crow is a mark of guidance, rebirth and rejuvenation.

The combination of these legends North and East inspired this piece. I wanted to depict the mystical bird-God on his crystal perch of power. Engraved on the crystal is the Norse rune Mannaz, which depicts the Bifrost bridge connecting the realms of man and the Gods. 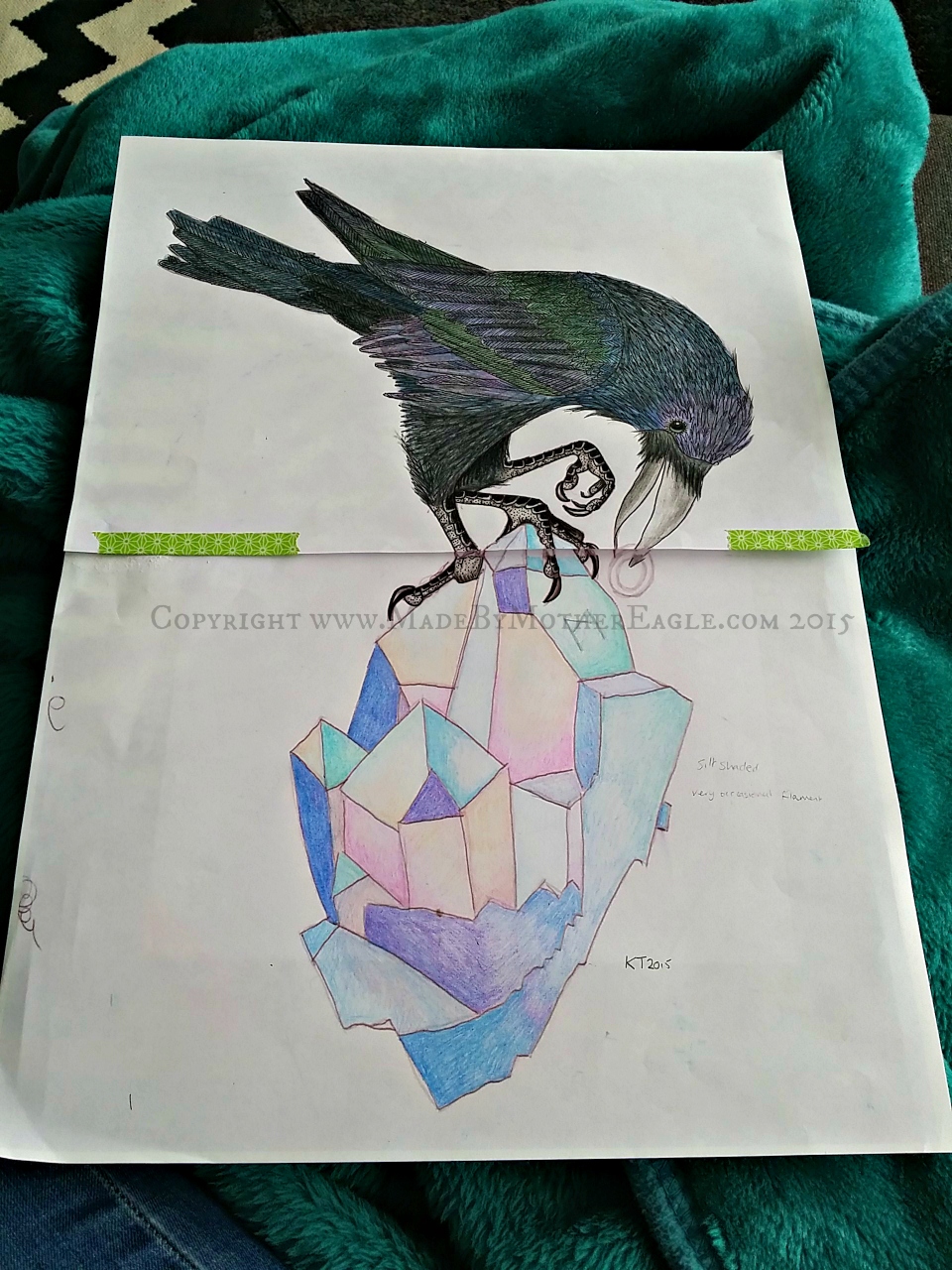 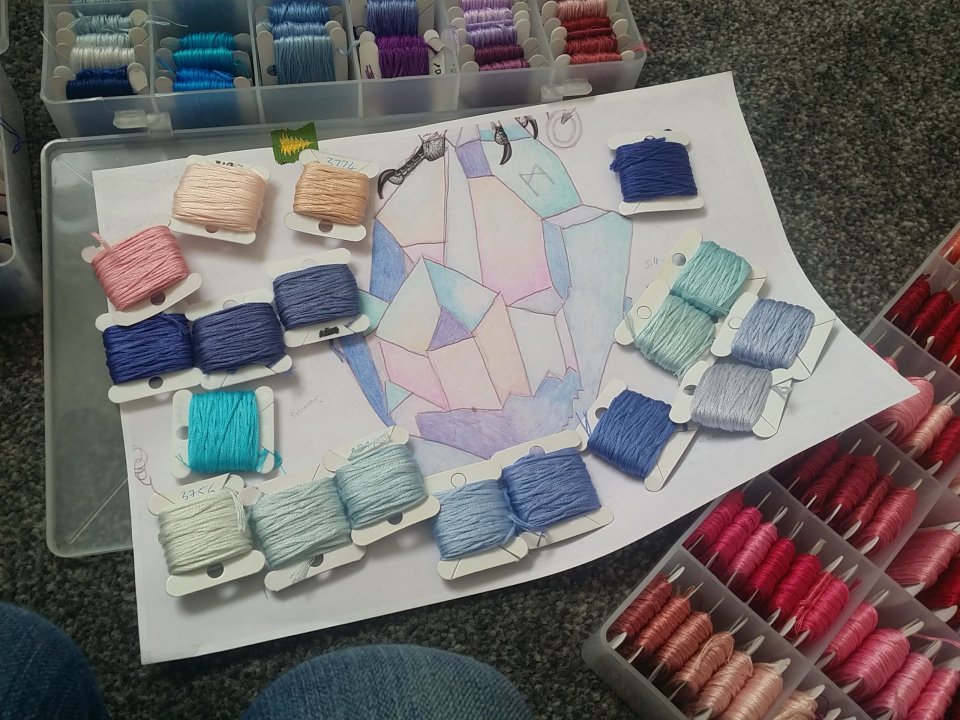 After the fairly monochromatic palette of the Snail Queen I was very happy to choose such a rainbow this time. Also about working on a dark blue cotton ground rather than white. Although this is a pain because every single bit of hair and fluff shows up. 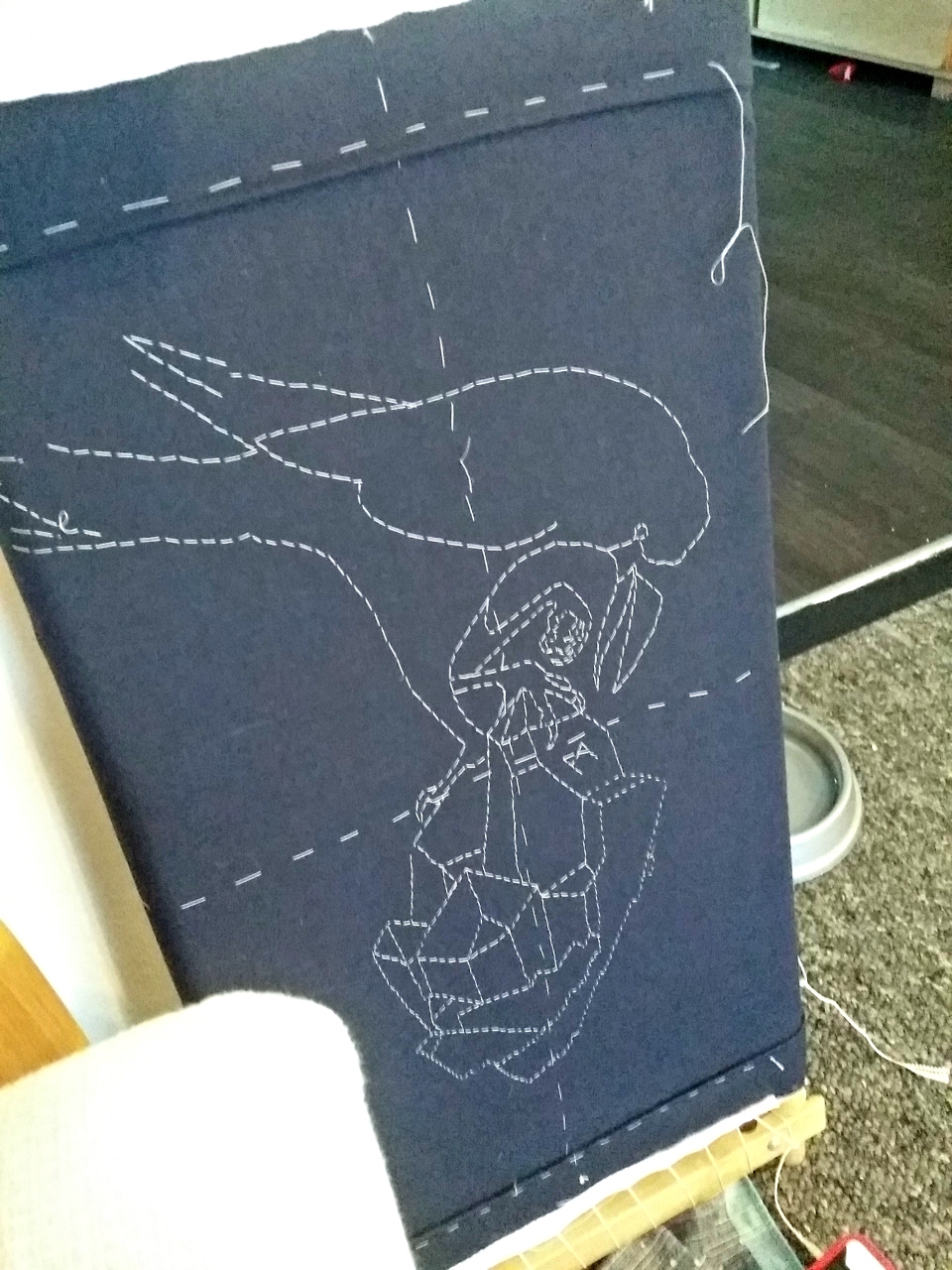 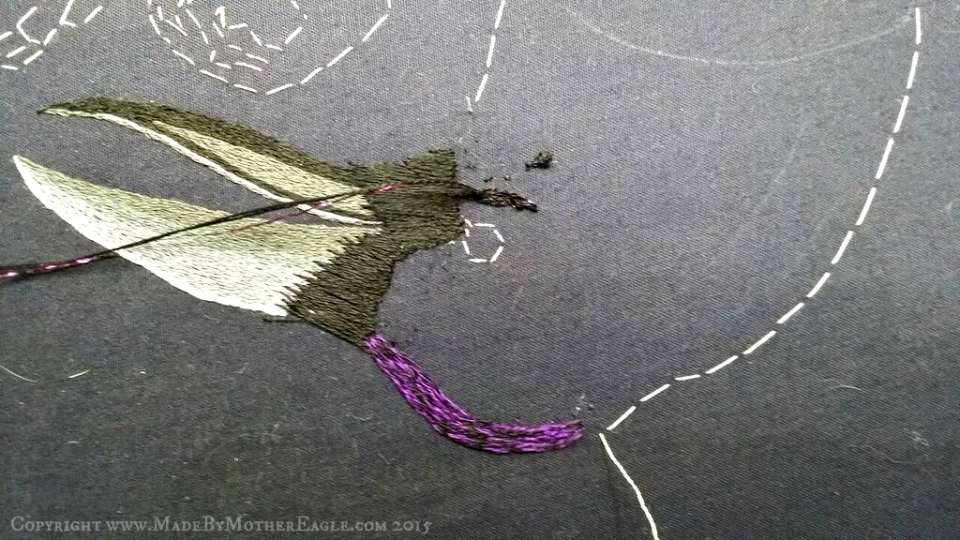 This was also a slightly different piece for me in that it was virtually all flat work. That is to say, almost no stumpwork or applique or anything. I was really keen that this was to be a black bird that had almost no black in him, his feathers highlighting the magical rainbow crystal colours and also the natural oily sheen ravens and crows have to their feathers. 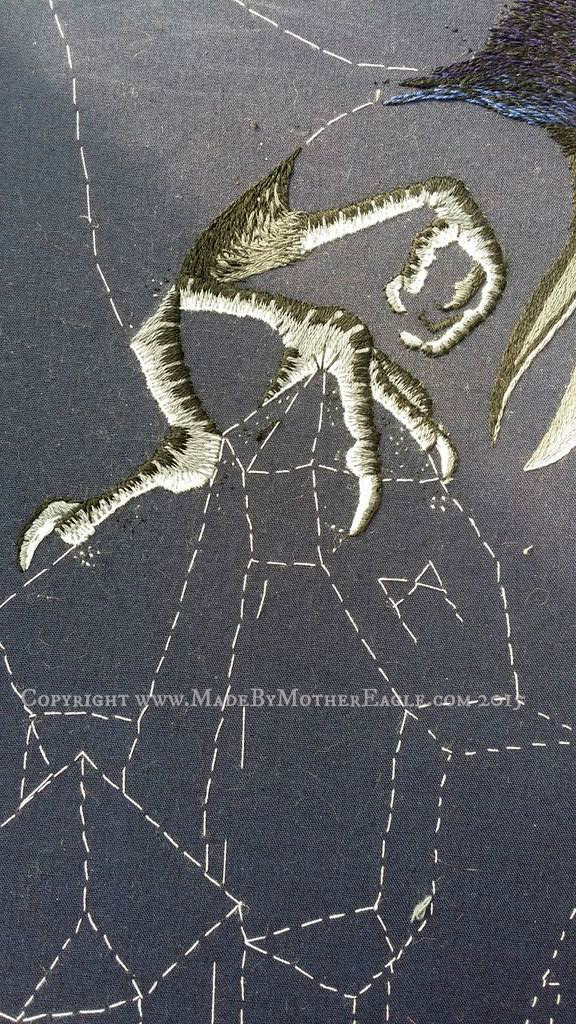 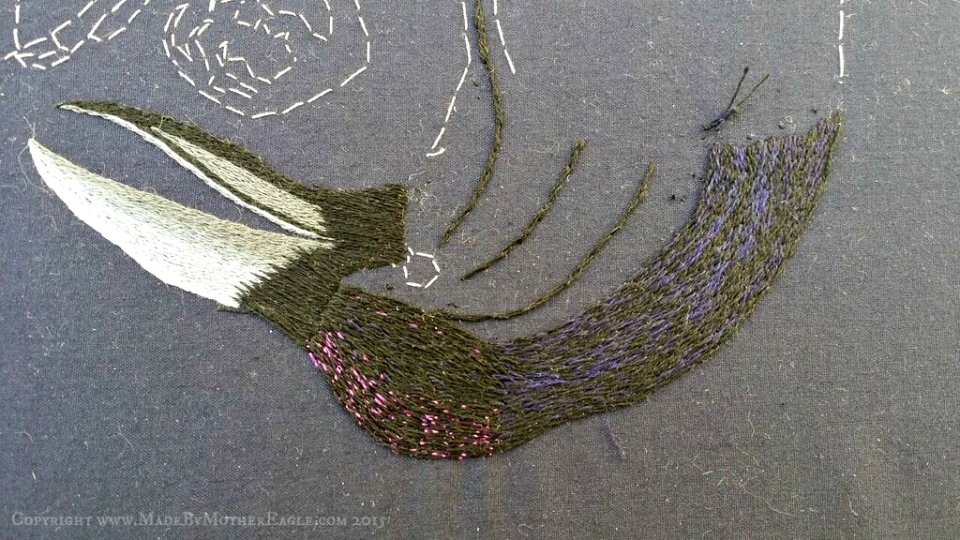 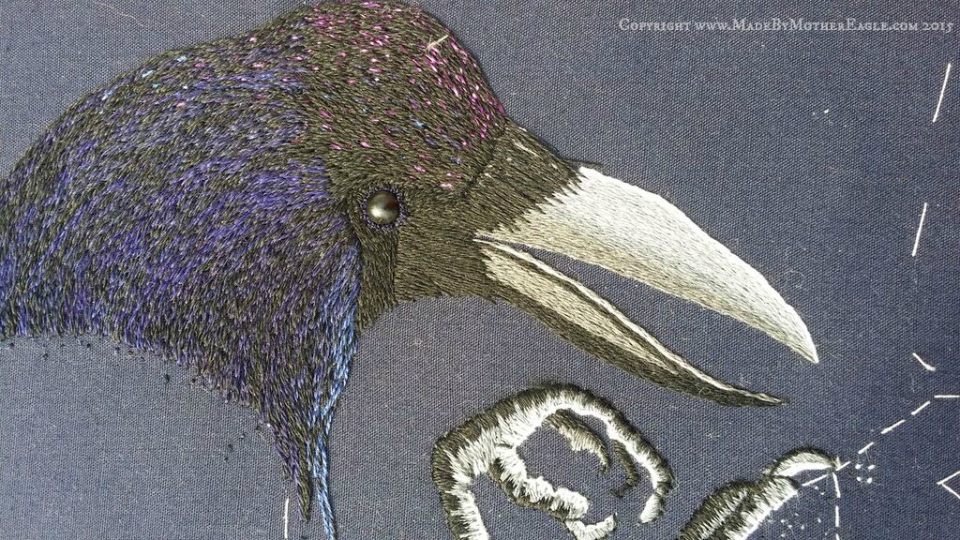 His head and claws were all done in split stitch, and I used a black split pin for his eyes, surrounded in tiny french knots. To achieve the subtle blending of almost black/coloured feathers I threaded my needle with one strand of black and one blue in various shades. there’s also a bit of Kreinik purple blending filament. 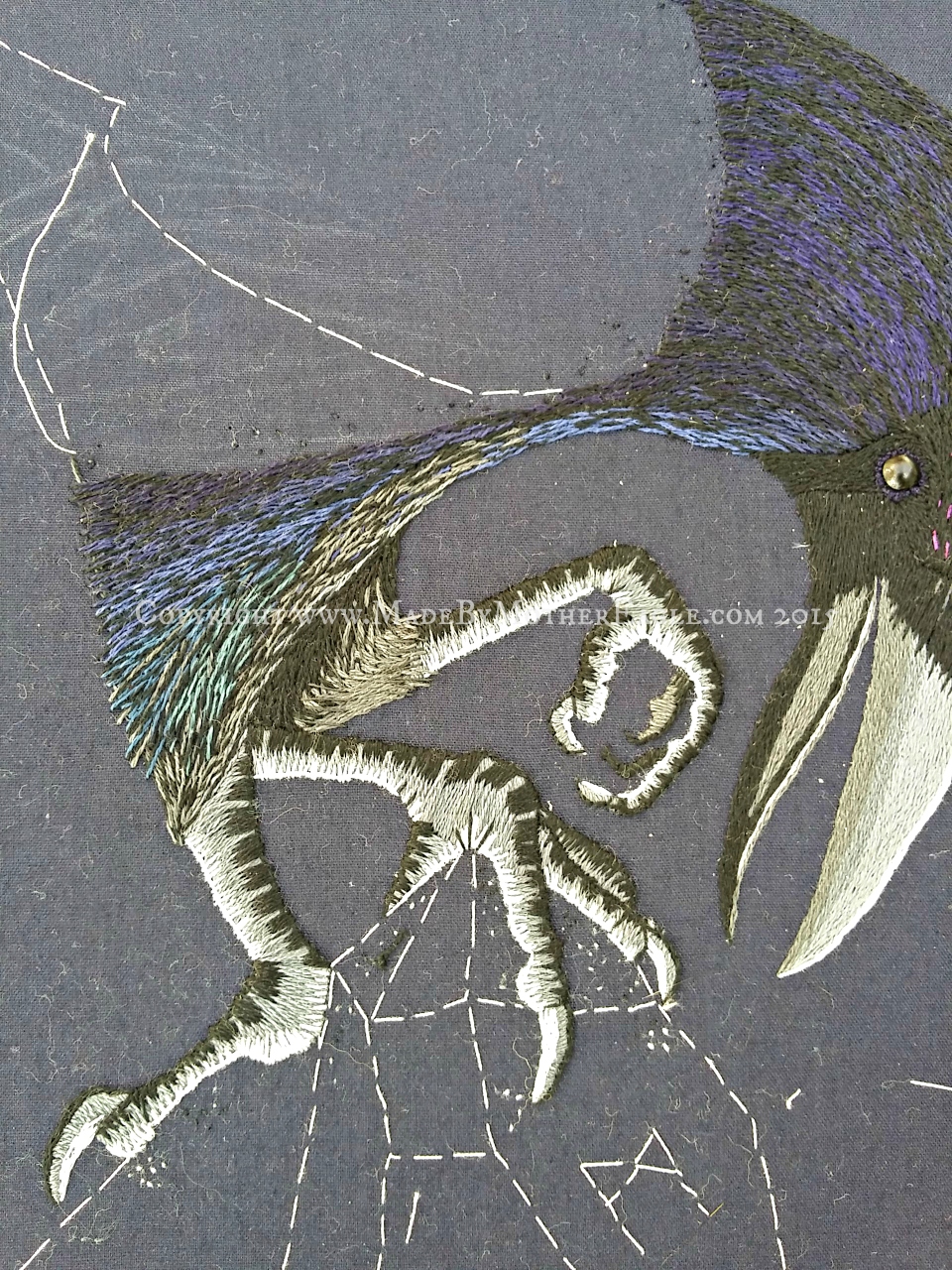 The rest of his body carried on in the same way. I had a bit of trouble trying to make sure his leg didn’t look too stripey. A dressmaker’s chalk pencil helped here with marking the feathers detail directly onto the fabric.

To create his larger feathers I used a combination of split stitch and satin stitch in true black and filament to start with, then pure satin stitch.

Two things happened at this point. I got bored with doing the feathers and straining my eyes with using dark thread on dark fabric (which as it turns out is a horrible chore and the opposite pale on white is a total breeze in comparison), and I went on holiday to Majorca, where I created the Raven’s wing:

Standard simple detached slip which I wired and buttonholed down before I left, and filled with stylised feathers in variegated cotton while I was away: 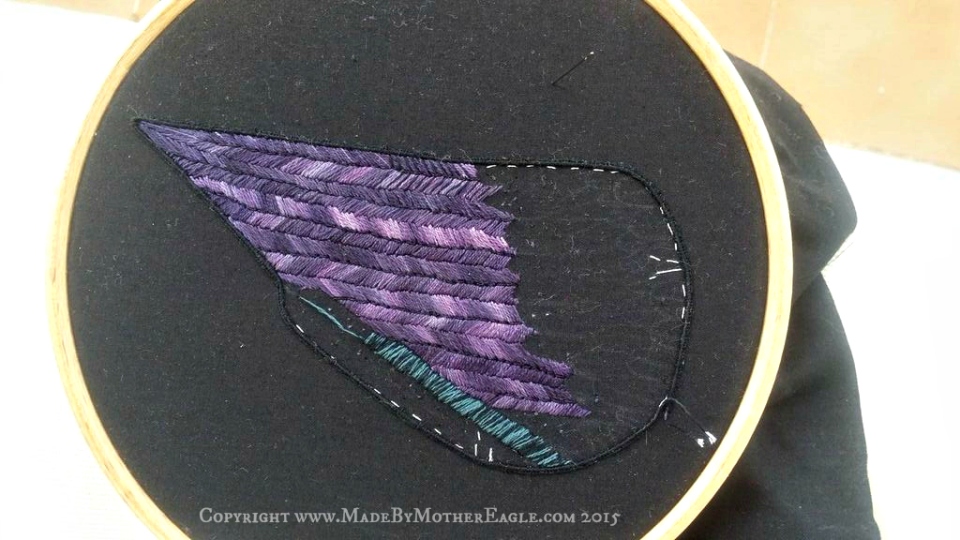 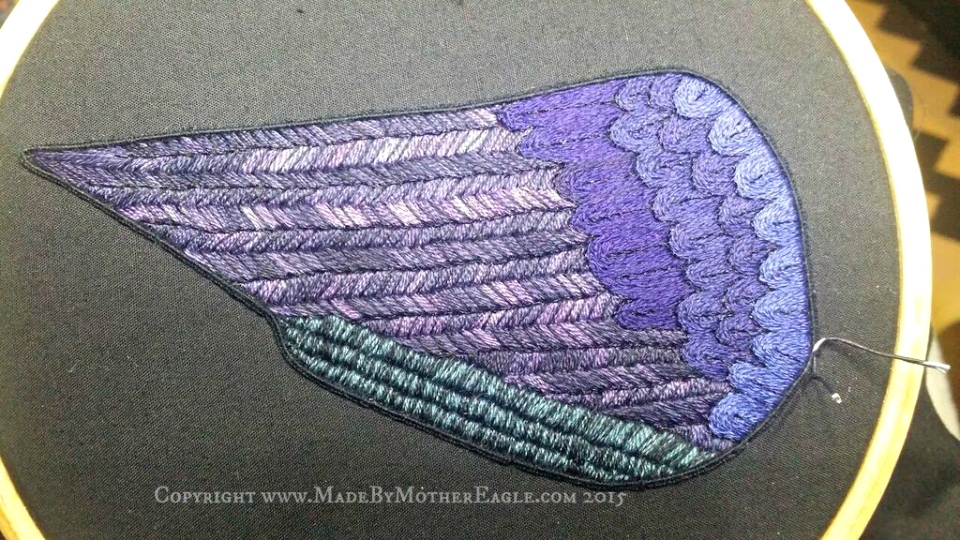 Combo of satin stitch and split stitch, as throughout. It was actually very disconcerting to work on this without the main embroidery which I of course left at home. Not being able to refer to the main piece for things like colour reference (as I hadn’t used any of these threads thus far in the main piece) and whether I had in fact strayed too far from the path with the stylisation of the feathers. 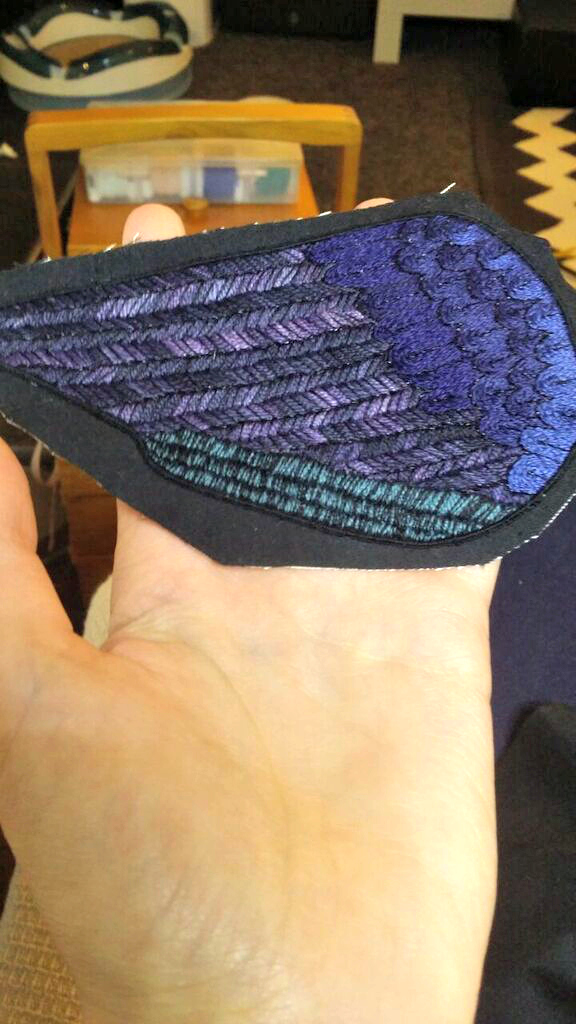 Turns out it was fine. This is the completed wing laid over the main work. The colours in the variegated purple really tones with the purple filament in his leg feathers.

Still not wanting to go back to stitching dark on dark, I started on the rainbow crystal. To be honest I feel like this whole bit was the first time I’ve properly tried to do anything approximating silk shading. Although technically this isn’t that either because I just used single strand split stitch, my old faithful, knowing that I do from pieces like the Swans than filling flat areas like this creates such a shiny surface you’d never know it wasn’t silk.

Like I said before, I had real troubles photographing this and getting all the colours in. Most of these facets are multiple colours blended to match my drawing which I was using as my reference the entire time. I was also trying to vary the direction of my stitches as much as possible so that the finished crystal would appear three dimensional. 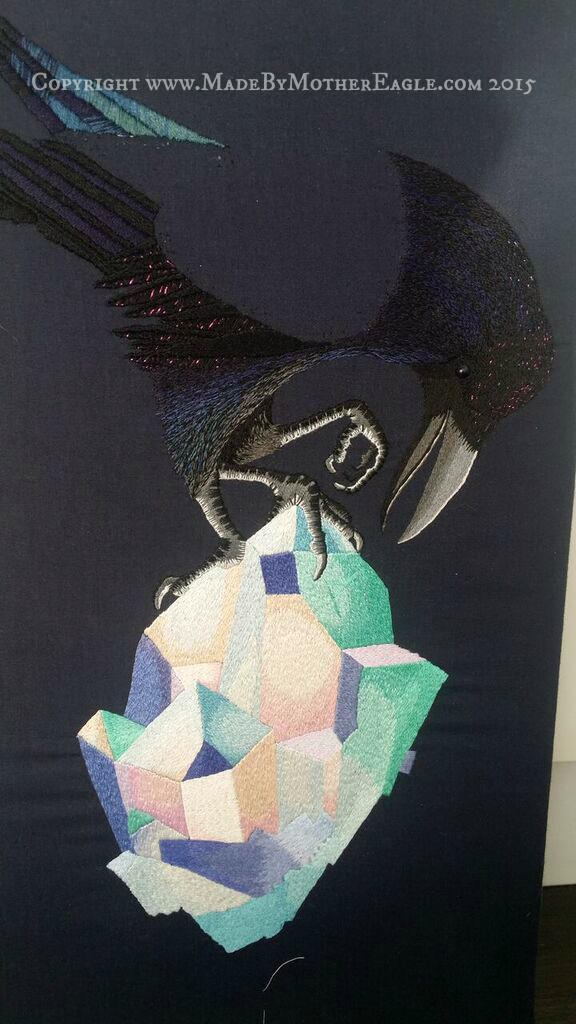 This is the finished crystal. You can also make out the rune which I over-sewed with some iridescent filament too.

And that’s the completed piece, with my hand for scale. I attached the wing giving a slight curve for 3D effect. 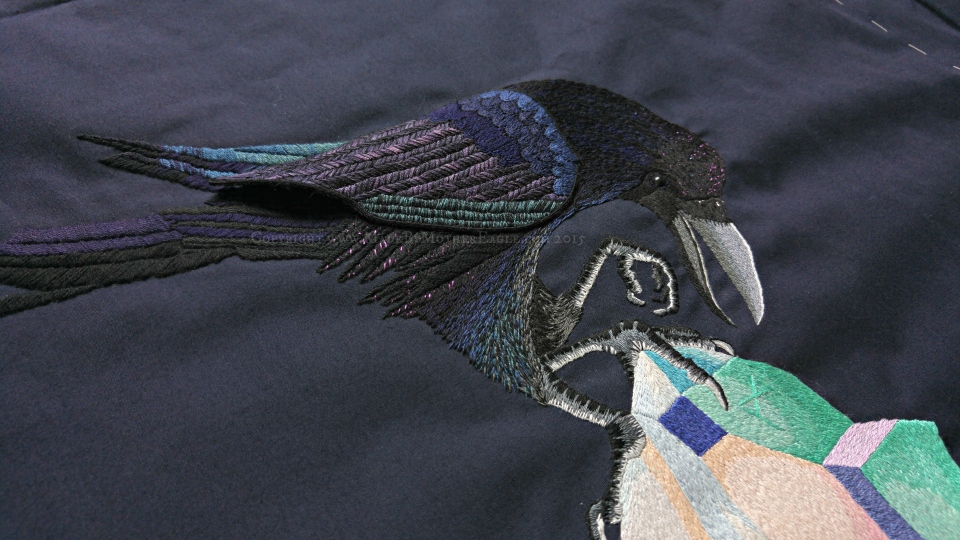 This post has been long overdue as I finished the God of Intervention back in early October I think. Since then I have completed 2 more works and nearly finished a third. You will know this if you follow me on Instagram, which you should, because it’s great. I’ve also been updating my website, which you’ll also know if you’re reading this. I’d love to hear your feedback as always.

3 thoughts on “The God of Intervention”