Hello, here’s a great big blog post for you all about how I made the Queen of Snails.

Unlike the God of Adversity this piece was pretty much fully realised from sketch through to completion. In actual fact, the snail has been one of the first things I drew in my sketchbook and wanted to create large scale. I was really influenced by an illustration by Alan Aldridge in possible the most loved and influential book I have, The Butterfly Ball (which I wrote about here). I had done a few sketches of a snail and developed from there. 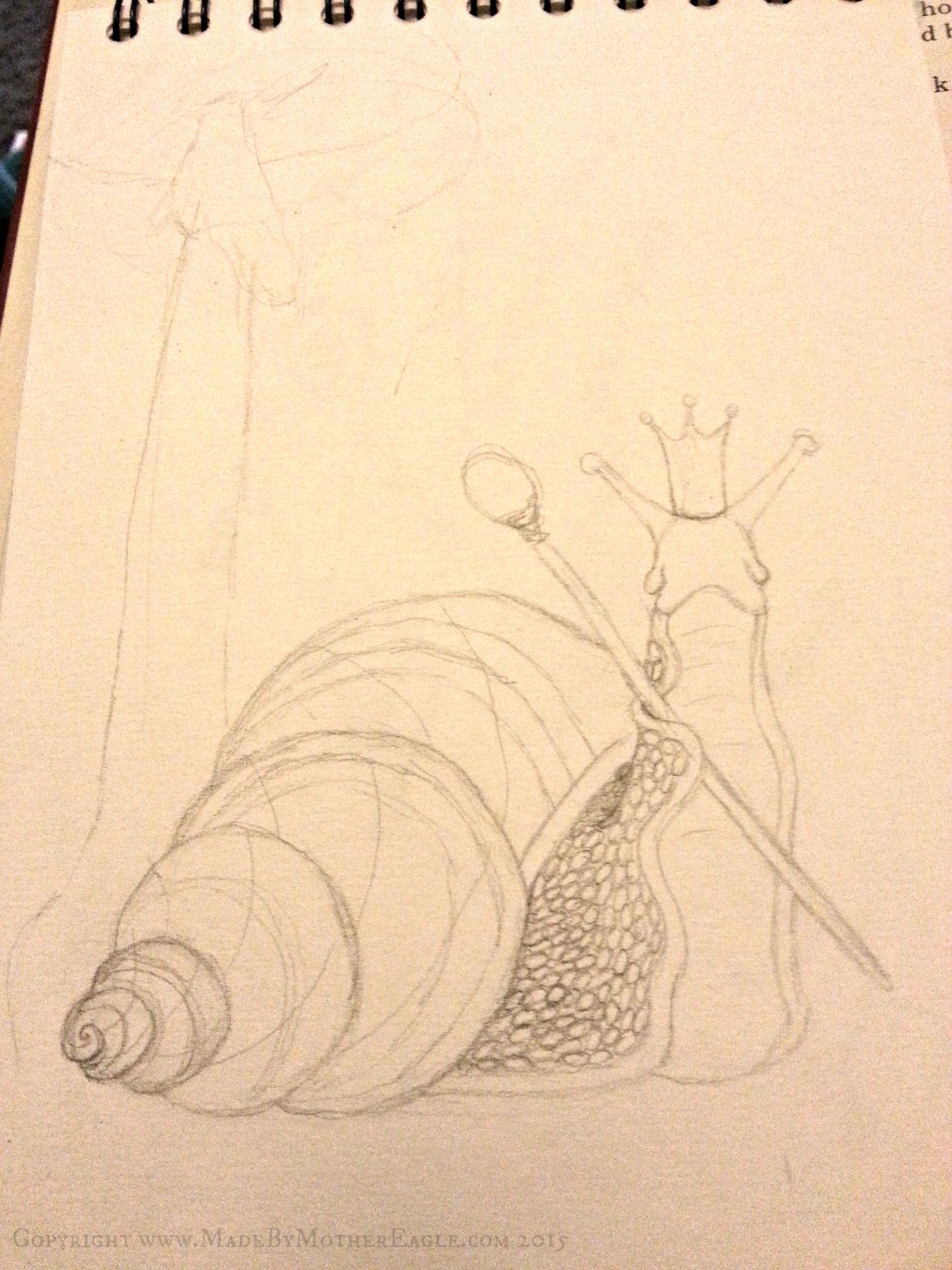 It took me ages to get the shell spiral right.

In line with the ‘God’ series I’ve been working on, I love the snail because it’s unloved. It’s not high on most people’s love lists. But I love snails and find them to have so much character and beauty, and not just the big impressive ones, but the common little brown garden ones too.

In creating this piece I realised about my process that the inspiration behind them comes in stages; I know the subject initially and this is what pulls me in. Then actually figuring out the composition and how to execute it comes next, and this is the stage that causes me the most problems. Often I’ll have an idea rolling around in my head for a while but it’s far less of a concious decision and truly an unconcious inspired one that makes me go ‘yes! that’s how it is!’. Which is maybe why I drew the snail before the Crab and the Toad and everything and only just did her now.

I knew it would be crowned. I always knew that. She started as a he, too. I don’t know why. Snails seem male – why is that? And the sceptre, that was early as well. When I started researching snails and imagery of snails I was thinking along the lines of the crab, with very strong colours and spiral, stripey stitching. It was also JUST a snail too. None of this clicked. I was visualising the crown in gold, a king…But then I looked into Snail symbolism and suddenly it all arrived to me, fully formed.

From this incredibly interesting website I learned that Aboriginal cultures observed thesnails ability to hide itself within its shell, or reveal itself. This behaviour is likened to the waxing and waning of the moon (revealing, and concealing). Also that snails represent awareness, and an ability to effectively interpret dreams and unorthodox realities. This is because of the snails antennae which are hugely exploratory. Further, the entire body of the snail is a sensory tool.

The snail is a she. She’s LUNAR, she’s SILVER, she’s a queen Goddess from Mother Eagle land.

So, inspiration strikes but also a problem in that I don’t want her, or any of these pieces, to be cute. I don’t intend cute. Turns out this is quite hard to avoid in a snail of all things and I don’t know whether to the casual observer I have achieved this. But drawing as I do from folklore and symbolism and mythology the whole composition revealed itself as having to have another element – my beloved toadstool.

I’ve wanted to embroider a white-on-white Destroying Angel for so long. The most deadly of mushrooms, but so beautiful and delicate and pure looking. The perfect murderess. The perfect companion to my queen. In this way I feel I am accomplishing a degree of subversion with this piece; The Queen is undoubtedly beautiful, she shimmers, she is magical. But she is powerful, she commands, she controls death and other worlds. 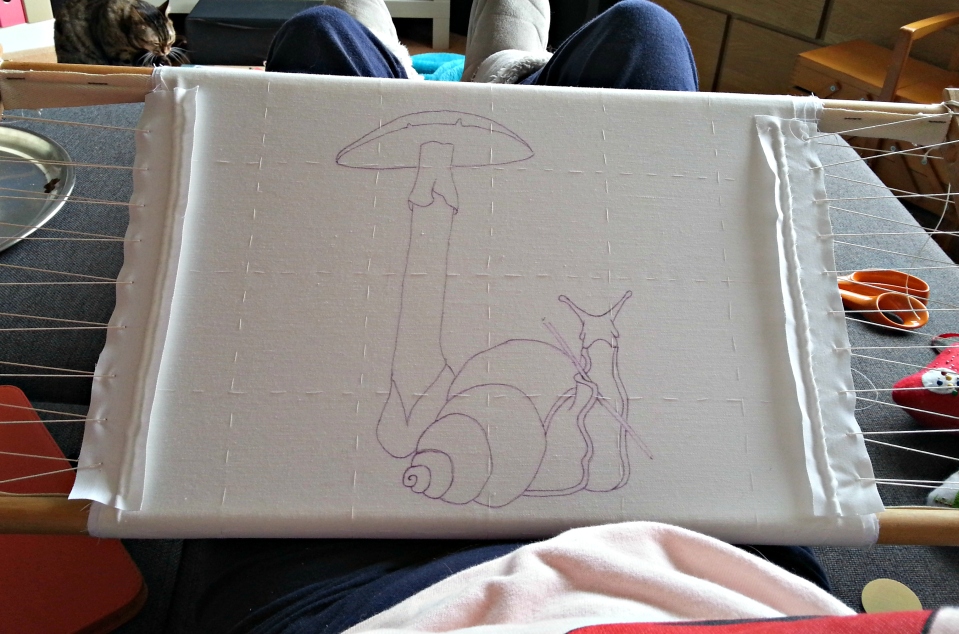 Perhaps for the first time ever, I actually framed up properly and seemed to have mastered this most essential of skills. Thank you Royal School of Needlework tutors on YouTube. That shit is tight. And I got to christen my new light box by transferring my drawing on to the fabric which gave me no end of pleasure. Sigh the right tools. 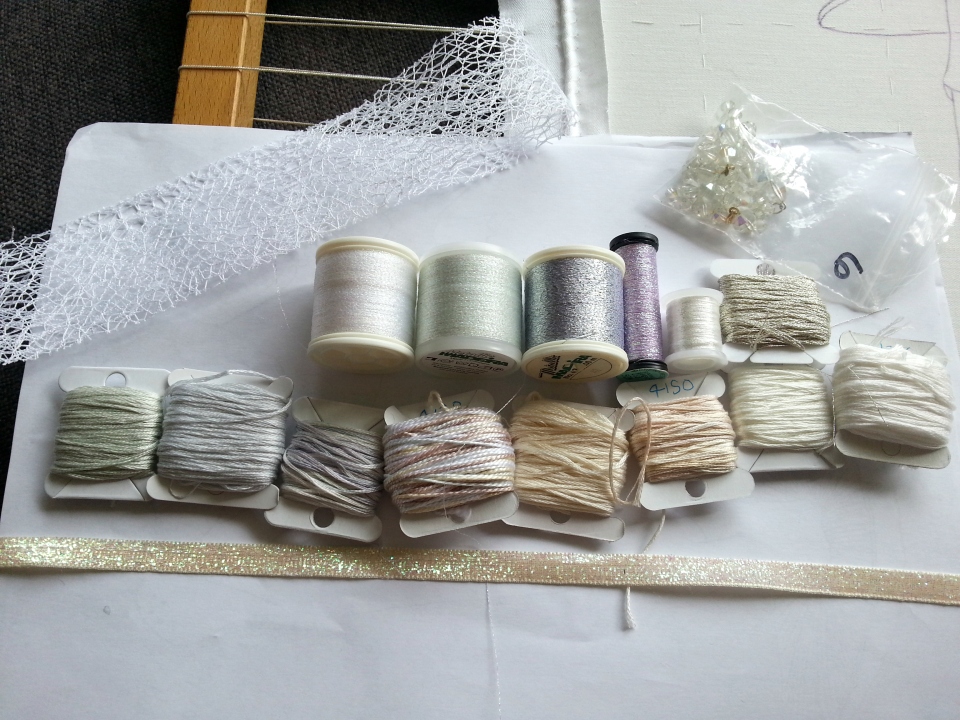 I rummaged through my not inconsiderable palette of threads and then I plundered my mum’s stores and then I needed to buy more things:

Actually my first time using Kreinik threads and I can tell I’m going to have to buy them all before too long. Holographic! Iridescent! 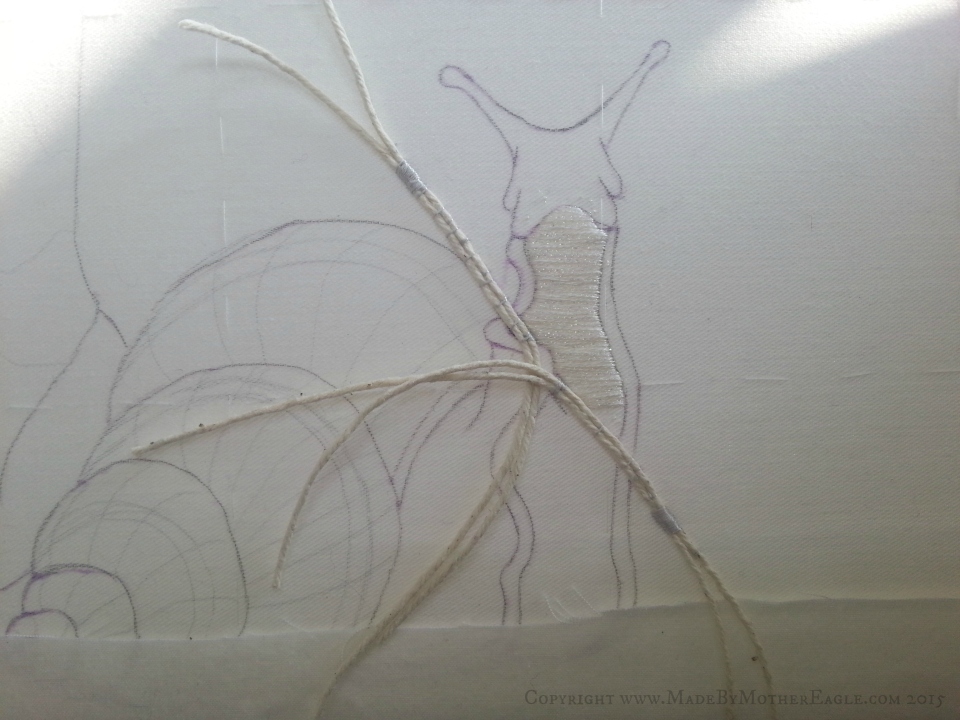 So we begin. A weird thing happened with this one in that I think because I was using such a subtle pallet my camera(phone) took even worse photos than usual and so nothing looks that great and it’s all a bit dark or weird. Sorry about that.

Not a lot of stumpwork elements in this one, but quite a bit of couching and satin stitch. Started off by blending a lovely neutral toned iridescent Madeira thread with single DMC cotton strand for her underbelly, and then started couching down ordinary household cotton string for the staff. 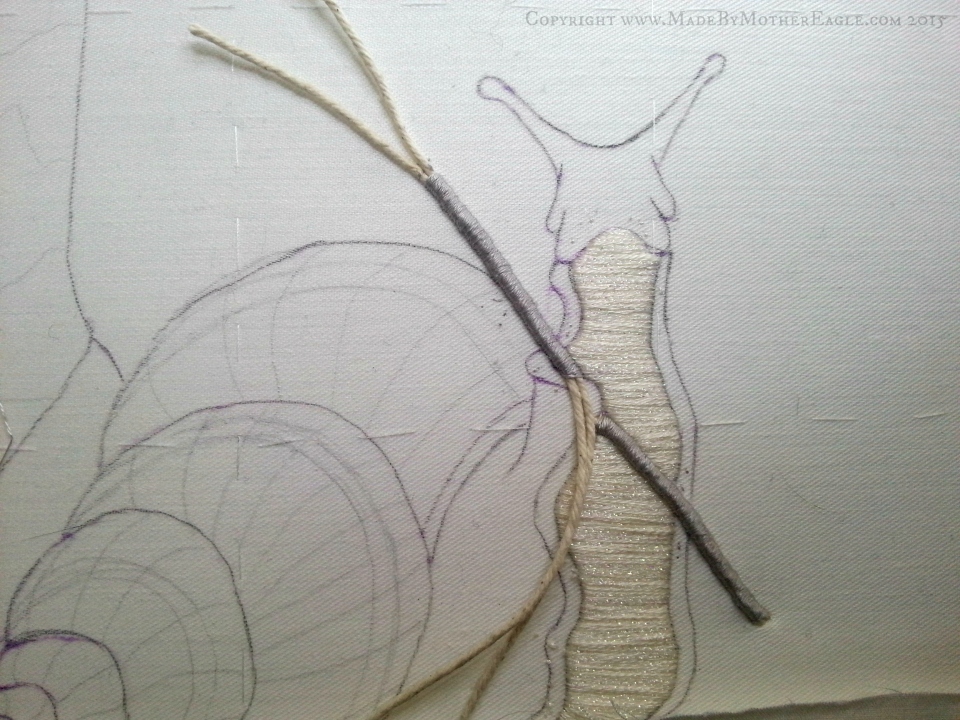 Then I couched down 4 or 5 strands of variegated cotton perle with a similarly coloured variegated DMC strand. Her head is worked in split stitch in the same stuff. 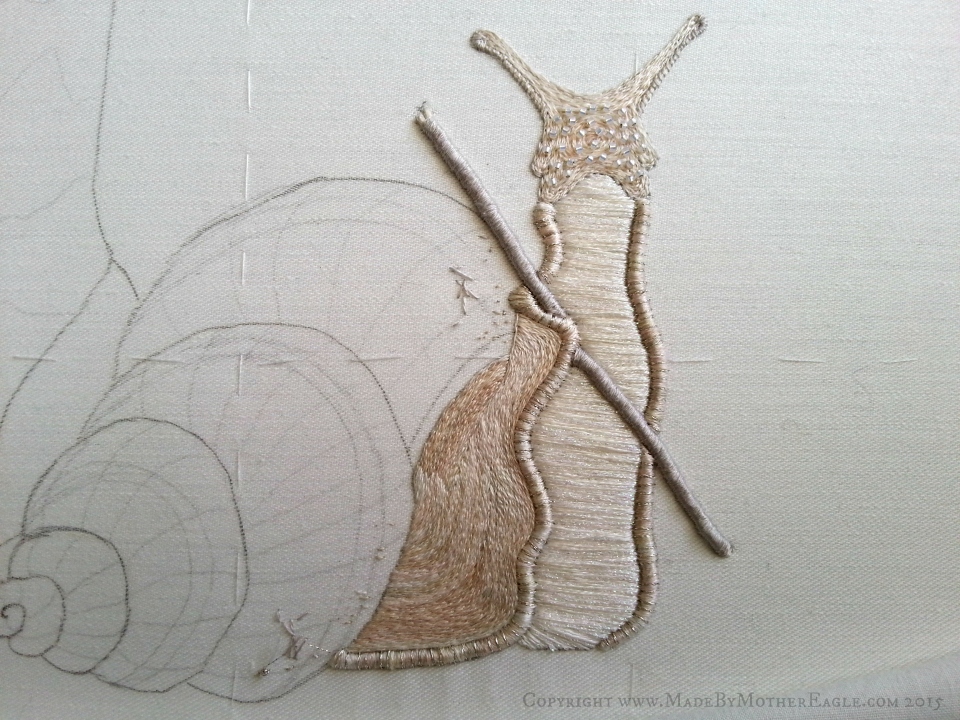 Turns out I’m really not that fond of couching.

I tried hard to come up with ways to show the wet, scaly texture of snail skin. On the head this was very tiny glass beads.

Body in split stitch using the same variegated DMC thread. Then I over-sewed it with silver metallic thread;

Body complete. Next I started on the toadstool;

Using all the shades of white cotton I simply satin stitched in one direction in one strand.

To create the bulb at the base I wanted to do some sort of appliqué but I’m also trying to represent the flaky, soft folds of the mushroom so I wanted this bit to have 3 dimensions. 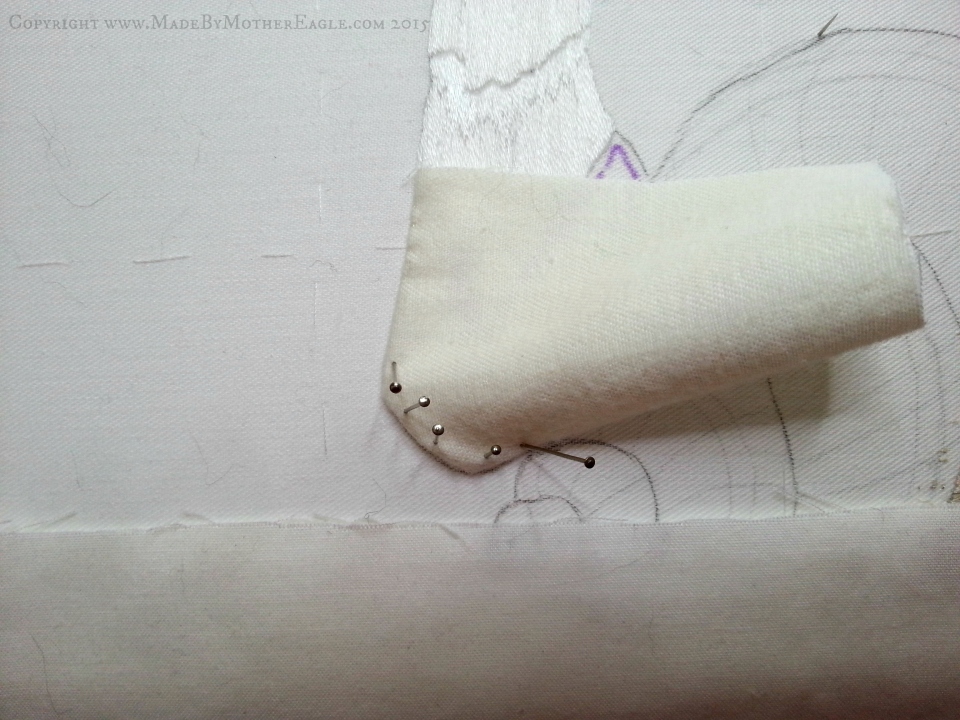 I’m using a bit of cotton pillowcase and stitching and folding as I go. 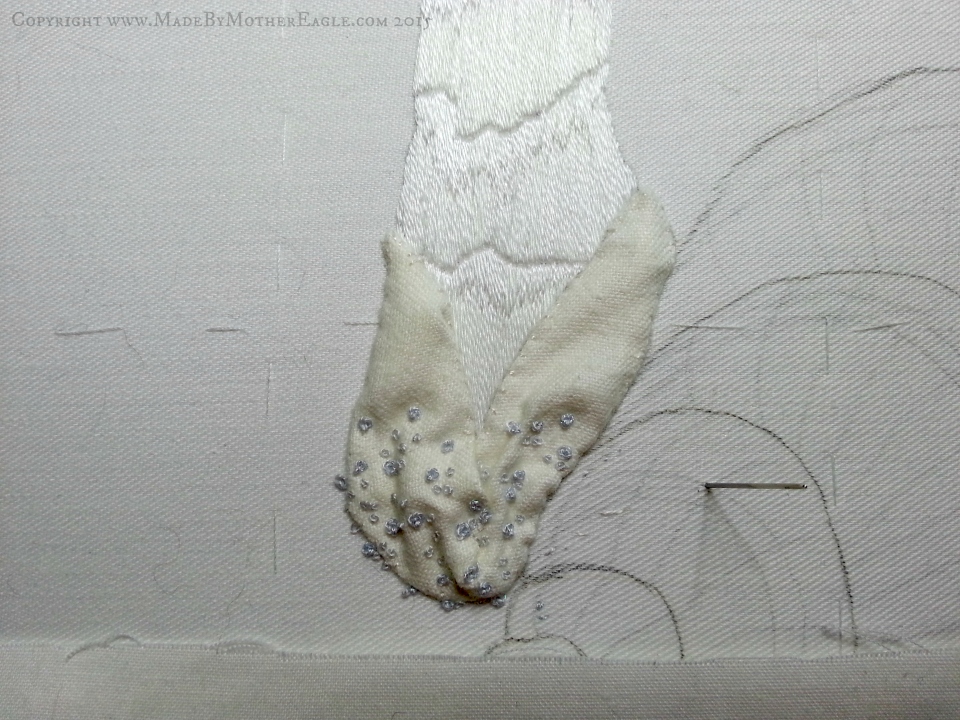 Then I added 2 sizes of french knots over it in a DMC silver blue filament.

You can also see I’ve attached the orb to the sceptre here which is a drilled faceted carnelian.

Now to the shell: 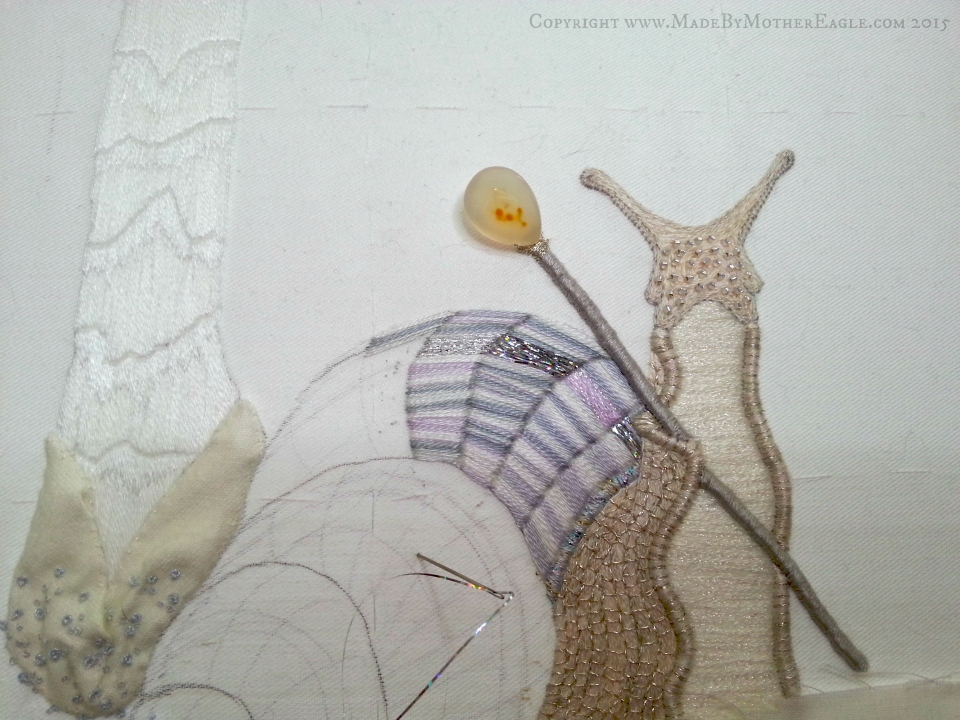 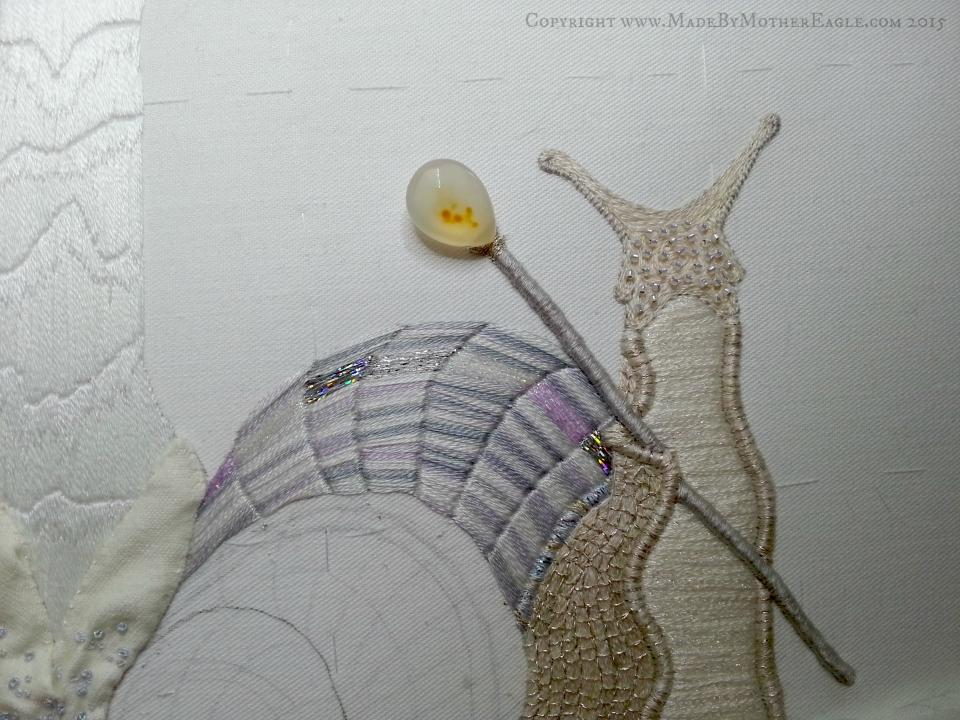 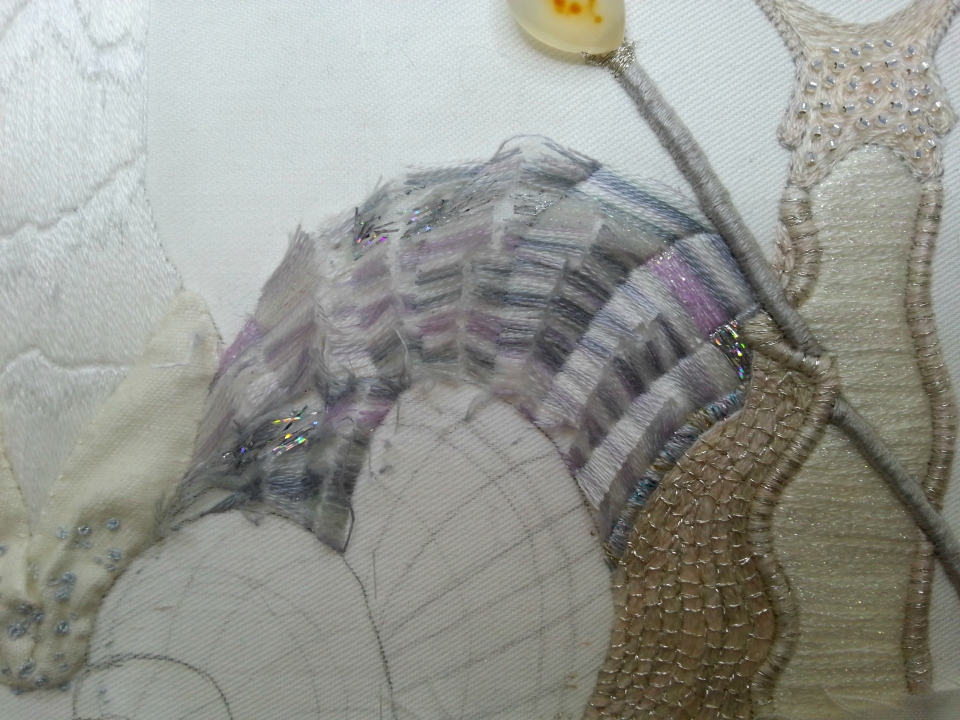 I basically got enthusiastic about all the pretty colours and actually the more I looked at it the more it all just jarred. So out it came and after a couple of experiments in a separate hoop I used the exact same shade I’d used for everything else.

Which just goes to show how different stitch techniques can give such different results.

I was alternating ‘stripes’ here by blending a green toned Madeira filament. Getting the angles of the stitches right was important to making sure the spiral didn’t look off. 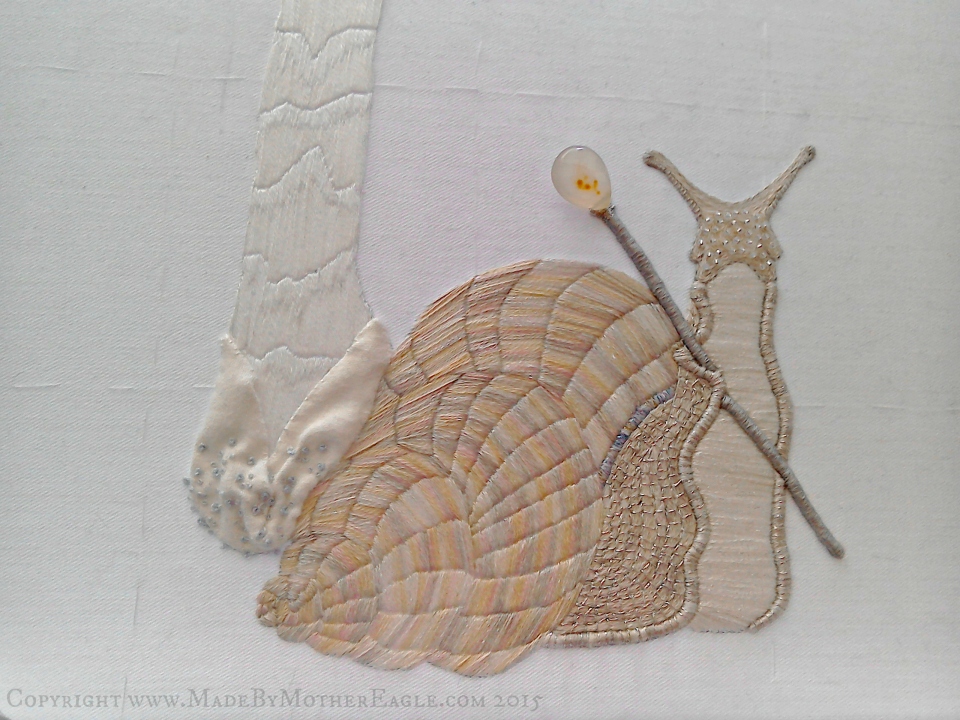 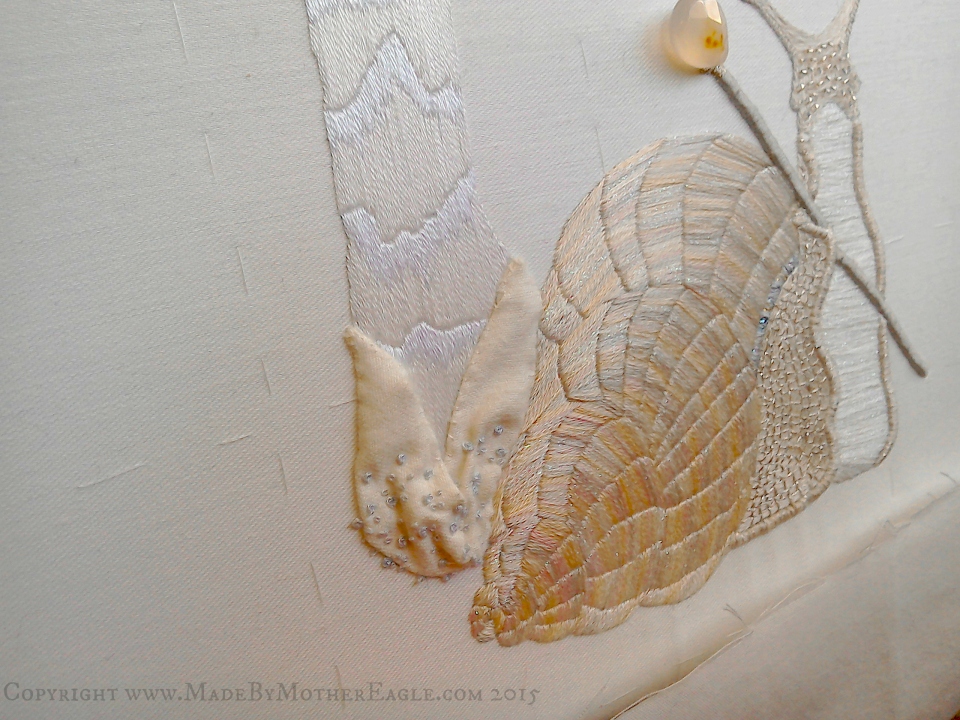 Next on to finishing the mushroom;

Everyone that’s seen it goes crazy for the veil but it’s a total cheat. You can spot this weird fused ribbon thing that I got from my mum’s stash in the picture above of my pallet, and that’s all it is, appliqué.

With the gills I was basically just couching over single strand of perle cotton, the same one I used on the body. And I’m using just the same coloured off white single strand cotton to wrap them with, but in a very happy accident, the colour underneath is bleeding through, and gives it a lovely subtle variegation.

The cap of the mushroom was simply split stitch.

Finishing touches. The crown. I’ve never done goldwork before. All those threads and techniques, I’ve never attempted it*.

So, I borrowed some silver metal threads and just had a go really;

Couched down some pearl purl and attempted some passing in the middle. 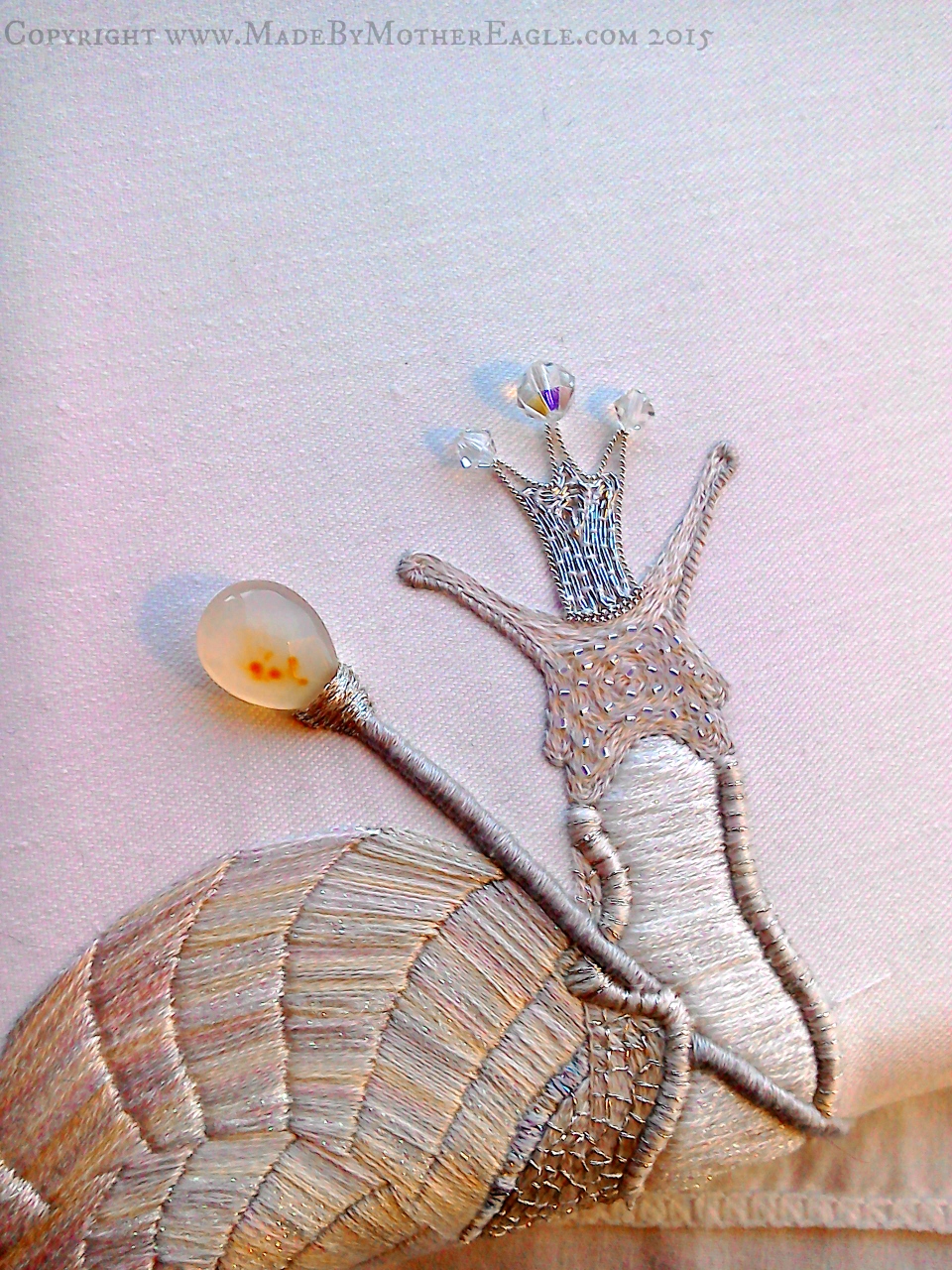 Vintage swarovski crystals from a broken necklace on top.

Finally I added some grey details to the shell, and couldn’t leave it without a shimmery iridescent slime trail. 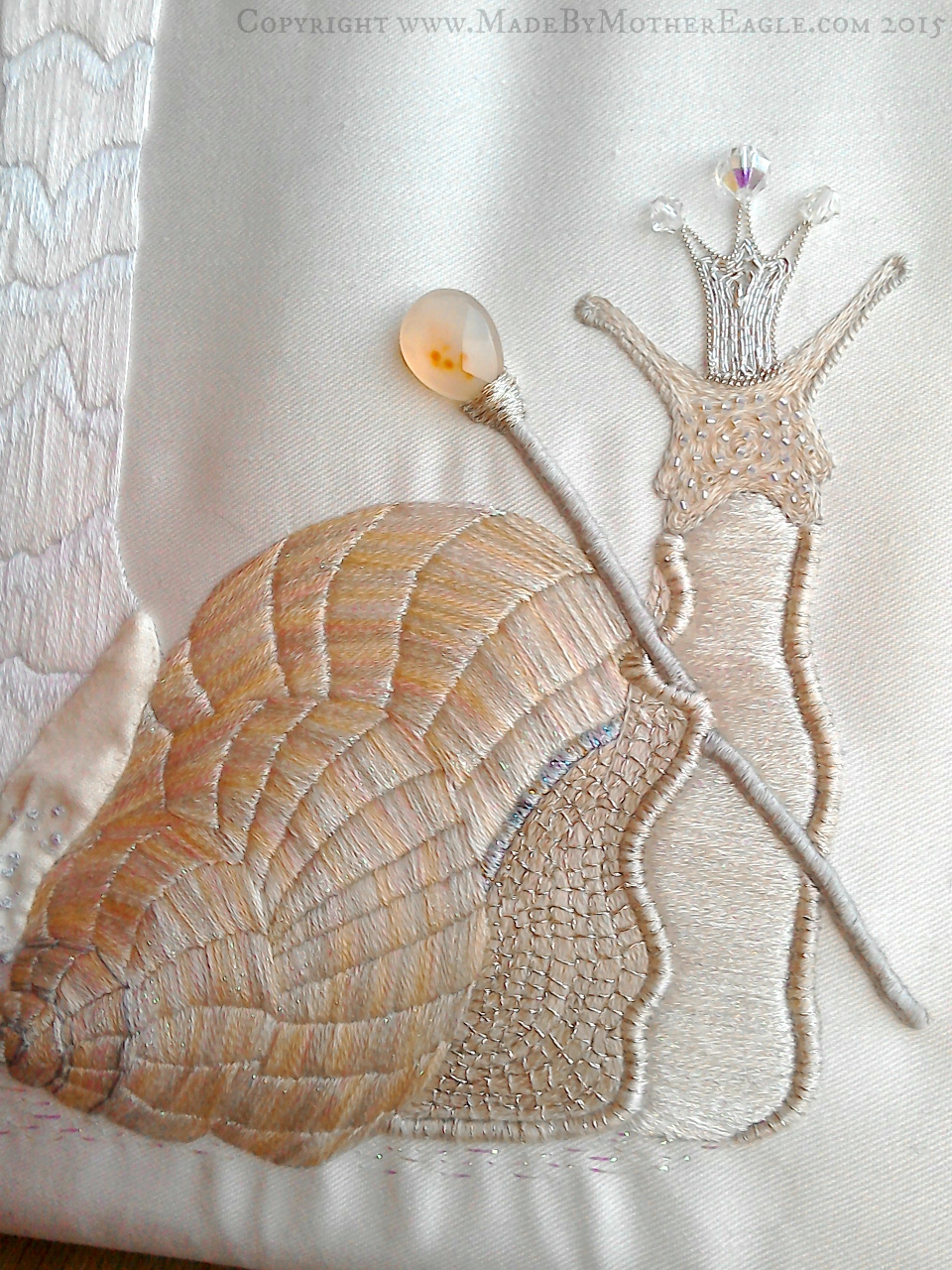 I really love how limited the pallet is in this piece. It’s very shell-like, mother of pearl. Subtle. Totally different to the other Gods. And she was quick! I was very surprised to have her completed within 6 weeks. Satin stitch. So speedy.

All cotton and man-made fibres.

And she and the Toad are off to the framers today.

*I will blog again soon about what I’ve been up to other than stitching, included a 2 day course at the Royal School of Needlework in coloured metal thread work :)

5 thoughts on “The Queen of Snails”