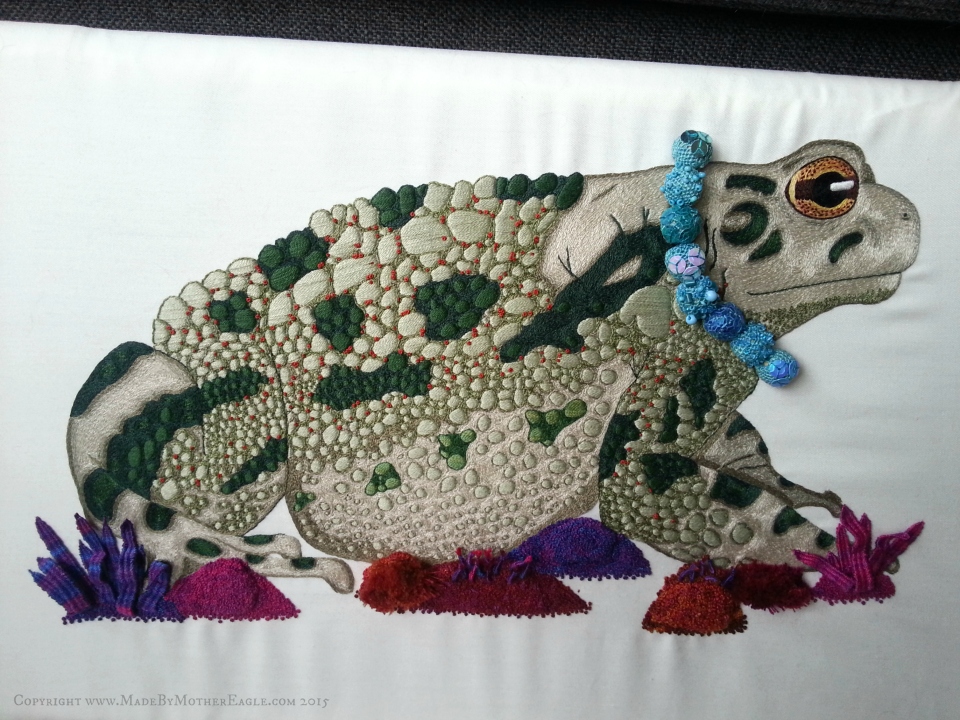 Just finished this big piece, my second one arguably fully realising my creative expression as an artist in large format. So here’s a nice juicey long blog post with lost of photos telling you how I did it. 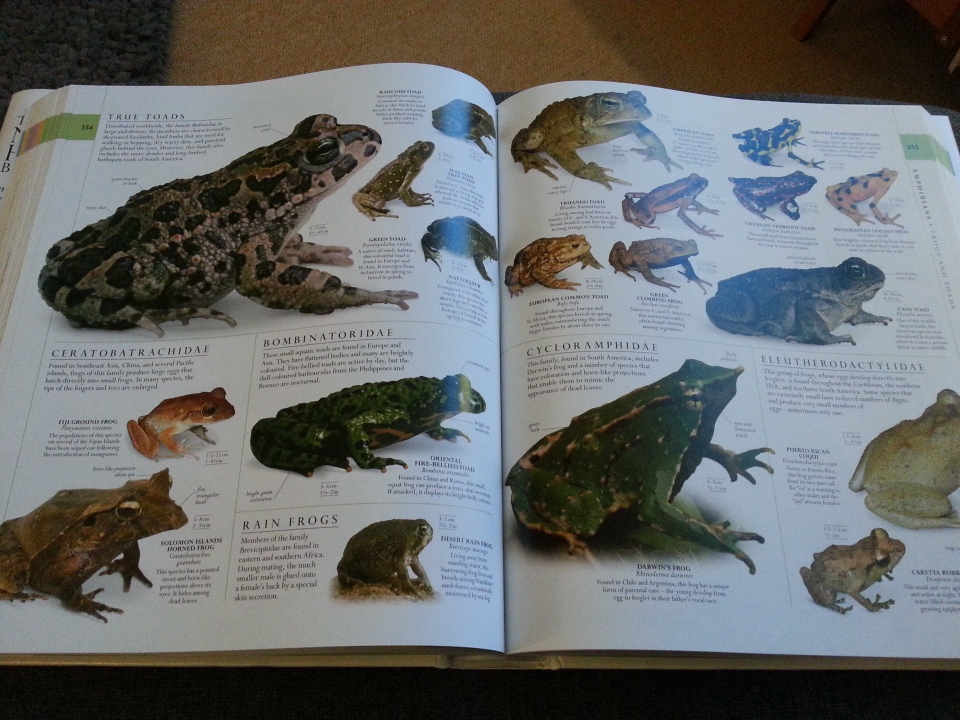 Just before I finished the God of Crabs back in September I began feeling around for the inspiration on the next piece. I just read back over my post describing the process for the Crab and see that I didn’t explain any of the inspiration behind that one either. Sorry about that. I think it’s because it didn’t really start from ‘that place’, as I did mention though, it was more for me to freely explore texture and embellishment.

True as well for this one, but one of the thoughts I kept having while working on Crab was about ‘ugly’ animals, ‘unpopular’ ones. God knows there are a lot of sweet little foxes and rabbits and deer in embroidery (in my own too, not hating), but more and more I find such interesting colours, textures, stories, symbols, mythology in the less fashionable creatures out there. I’ve been vegan for about 2 years, and thought a lot about speciesism, how in our culture we hold up some animals over others, how some animals are seen as ‘cute’, some ‘disgusting’. Some are even feared. So inspired by my own love and fascination for all animals, I wanted to explore ‘unlikely’ candidates for elevation to godhood; creation of my own mythological pantheon. Embroidery has been long used throughout history to embellish in the name of worship, often the finest work reserved for ecclesastical settings. My work has always been narrative, the Mother Eagle muse being central to everything. The evocation of Godliness to the crab translates through the rich colour and jewelled embellishment, but this concept developed through the process.

This toad piece began with the intention to call him a God, but despite this he still evolved conceptually into something quite different to what I envisaged. 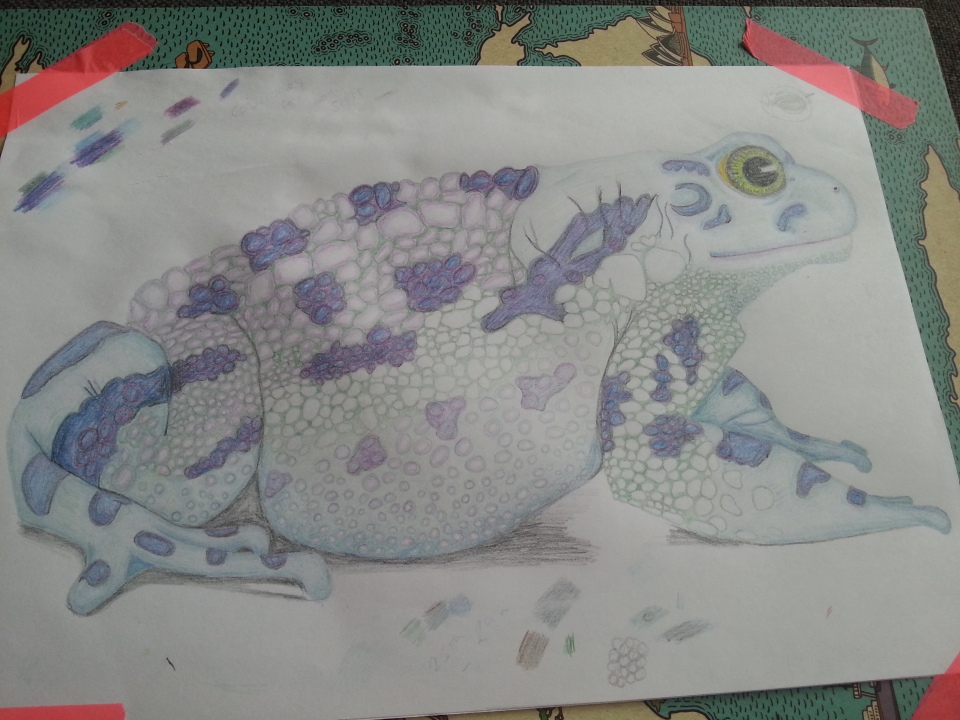 Originally I was inspired by the cordyceps mushroom (mushrooms also being a recurring motif for me), and wanted to have three-dimensional mushrooms and plants growing out the toad’s back.

So I transferred the very intricate pattern on to my ground fabric in ordinary pen. GASP. Then I realised I’d probably put him a bit too far up the fabric to have too much coming out the top of him…Hmm. Well, here follows a lot of step by step pics:

Every little wart was embroidered individually. I wanted to achieve a warty texture, so each one was padded satin stitch. I padded with two strands, satin stitched with one. 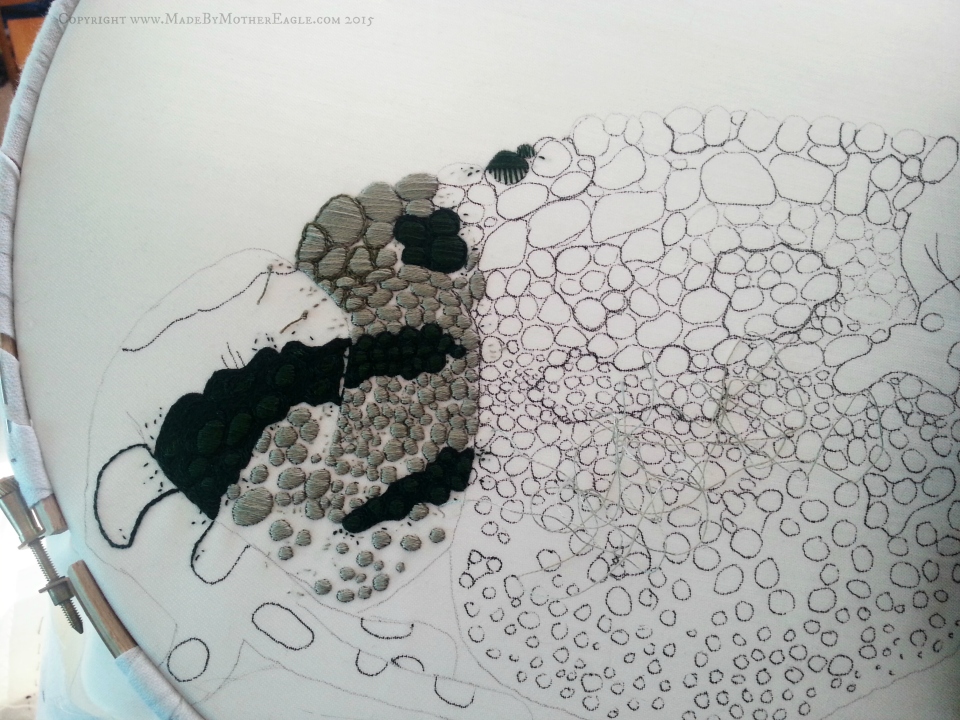 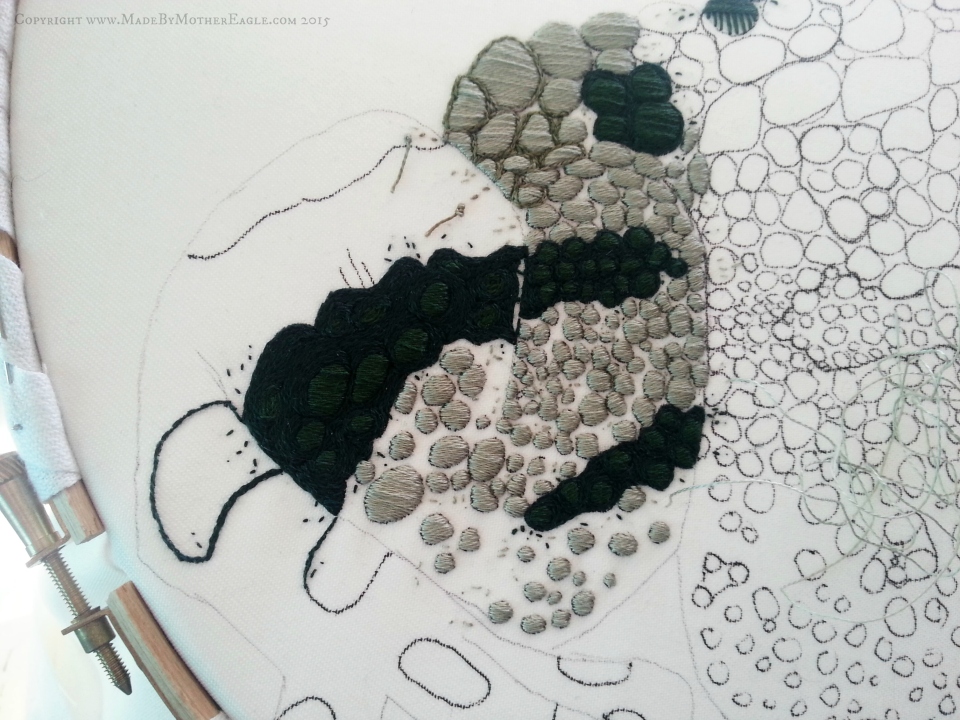 Each wart was then surrounded with variegated perle cotton in my beloved split stitch. 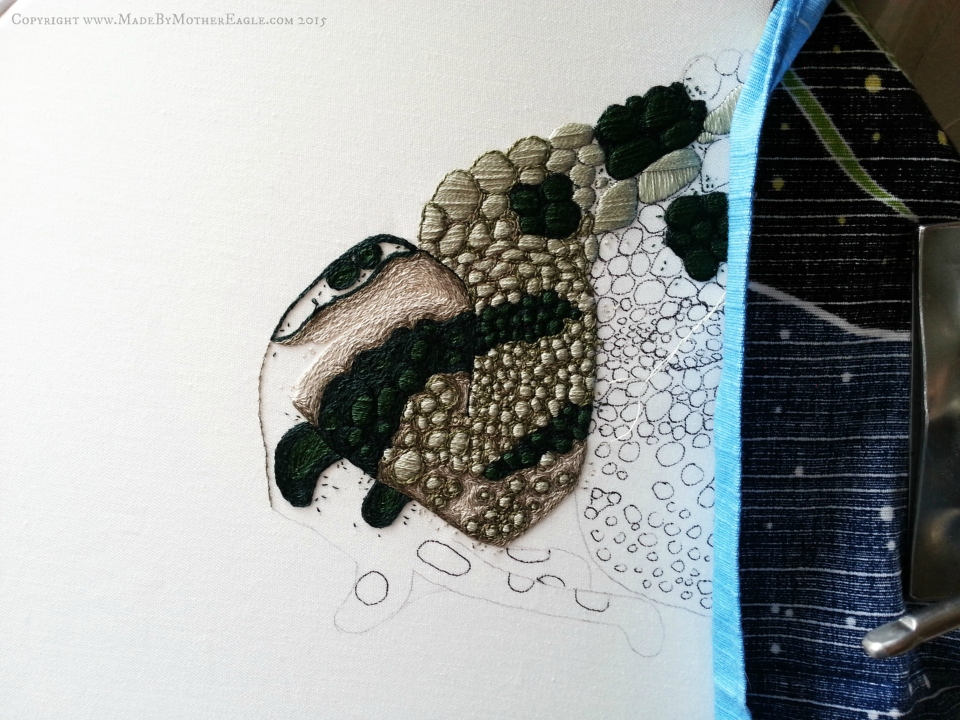 That belly took a long time. 2 weeks off at Christmas. 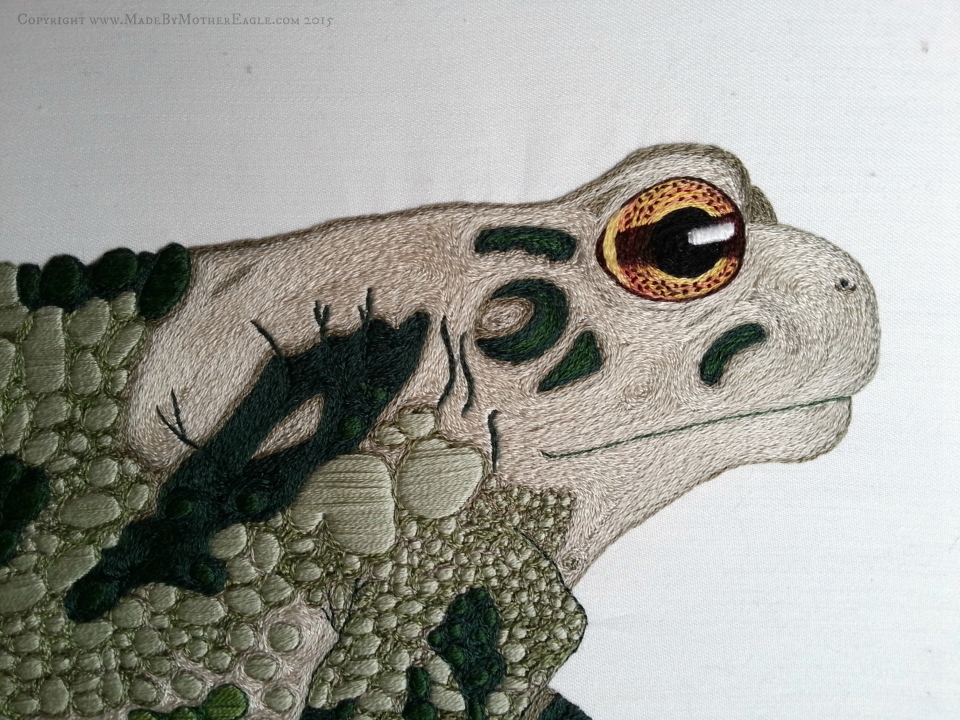 Then I added some more texture with french knots on his chinny chin chin. 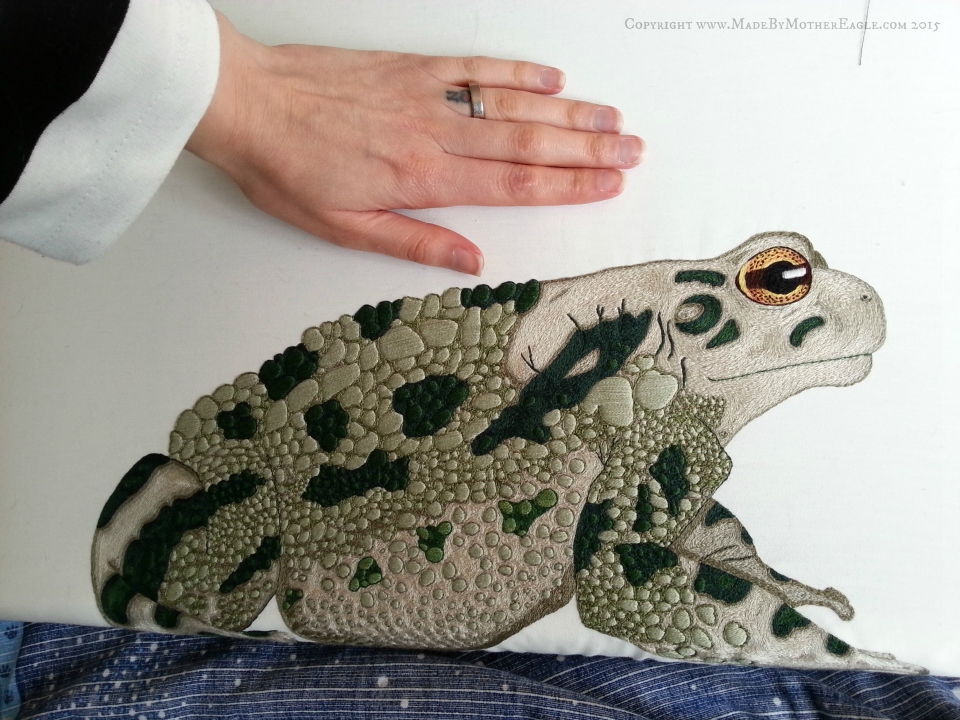 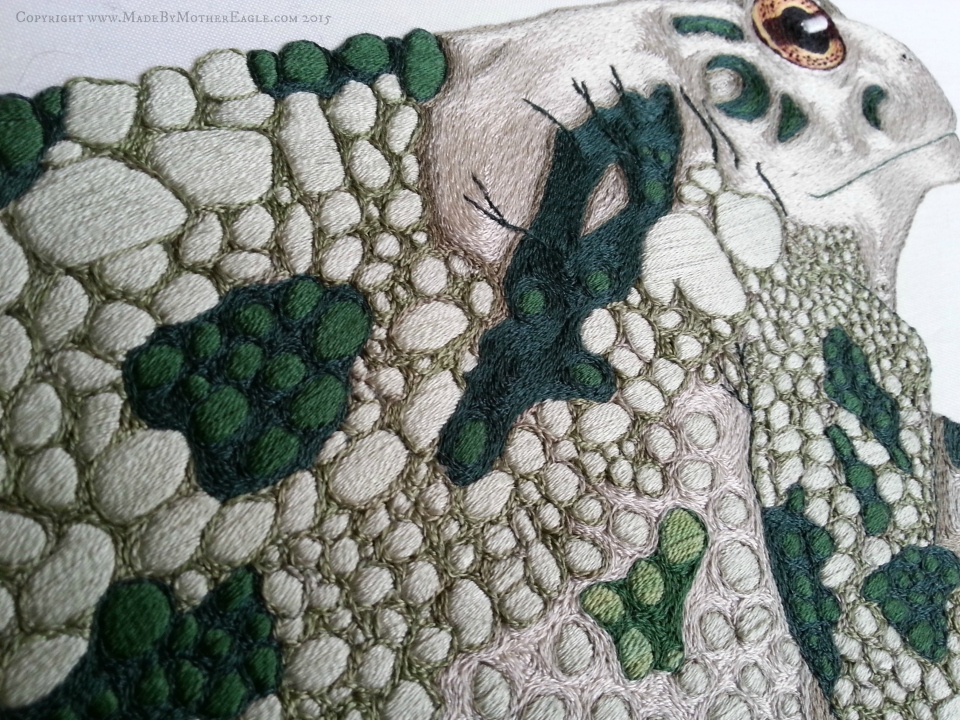 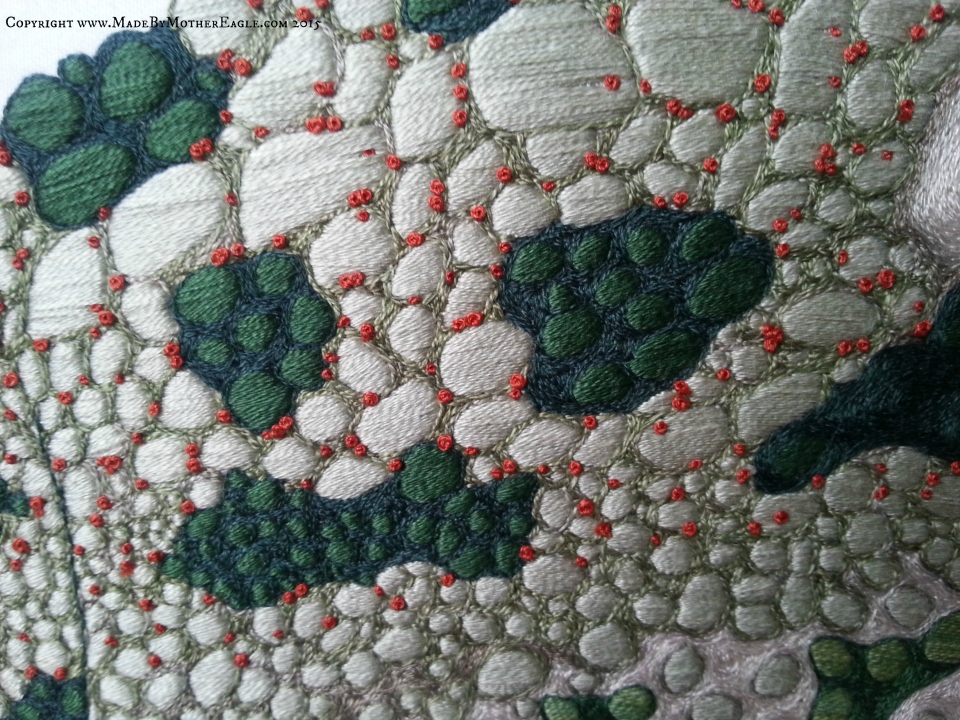 It was around this point after Christmas that a friend of mine sent we a quote from Shakespeare’s As You Like It she was reminded of after she saw my work in progress:

“Sweet are the uses of adversity, which like the toad ugly and venomous, wears yet a precious jewel in its head”

Increasingly I had been feeling like I couldn’t conceive of a good enough method to attach stumpwork plants and mushrooms growing from his back, and as soon as I heard this line, inspiration struck and i knew I wanted to ‘crown’ him in some way. Steering clear from the cliched frog prince, I decided on a magical jewelled necklace, which started off as needlelace covered wooden beads:

Each bead was embellished in various sequins and beads. 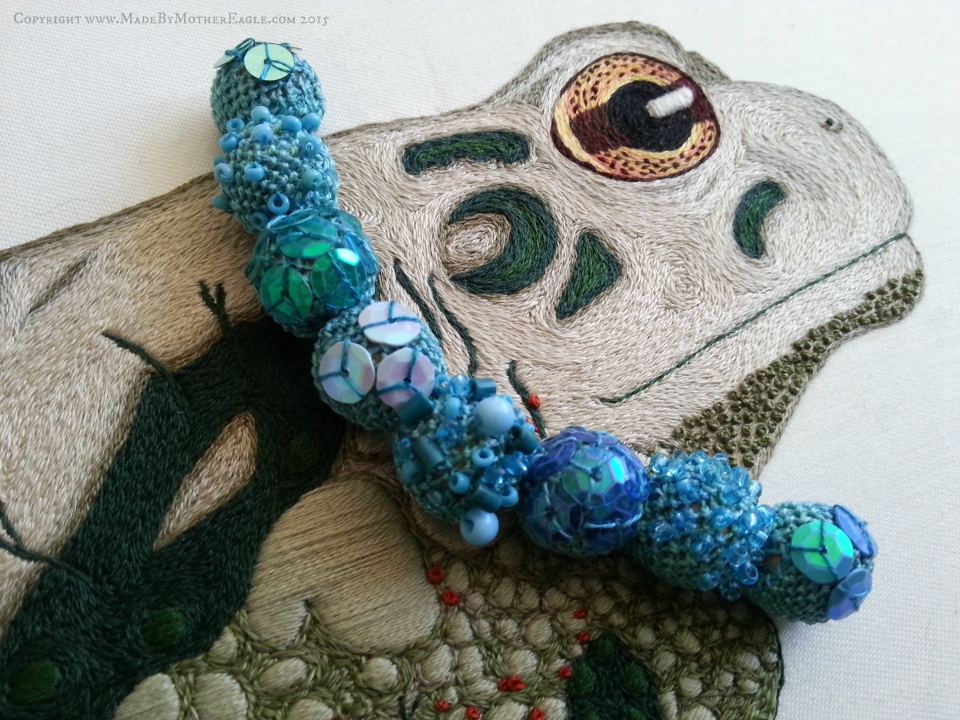 At this point I was not entirely convinced I’d made the right choice as this was the only 3D element in the piece so was a bit incongruous at this point, but I knew there was more to come to balance it (hopefully) plus I just loved the image of this great magical toad in his bejewelled necklace :) 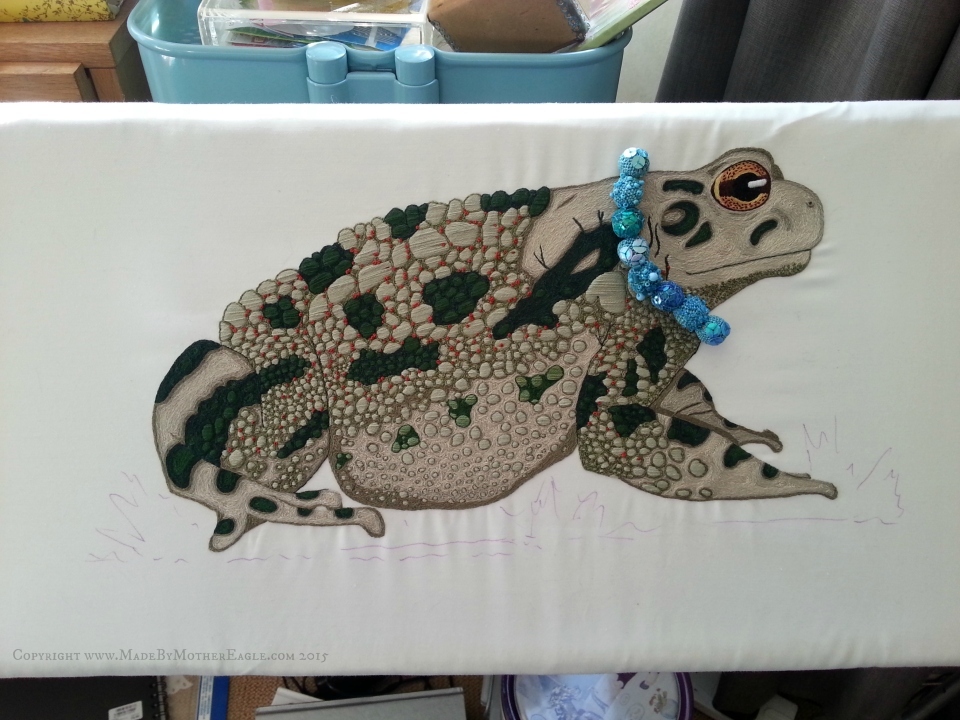 Planning out his nest. 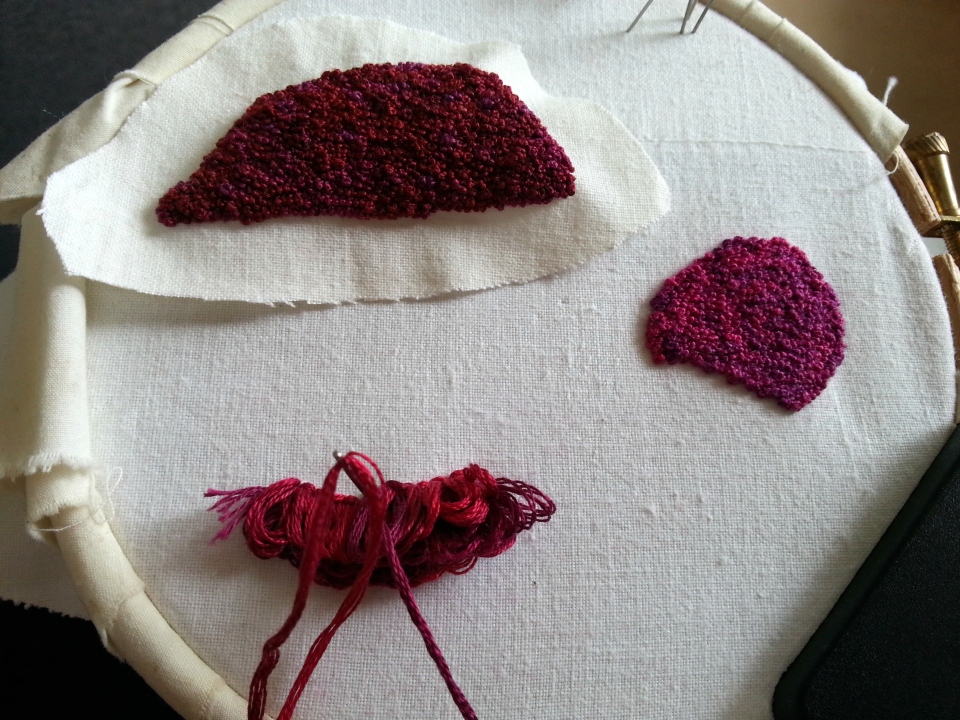 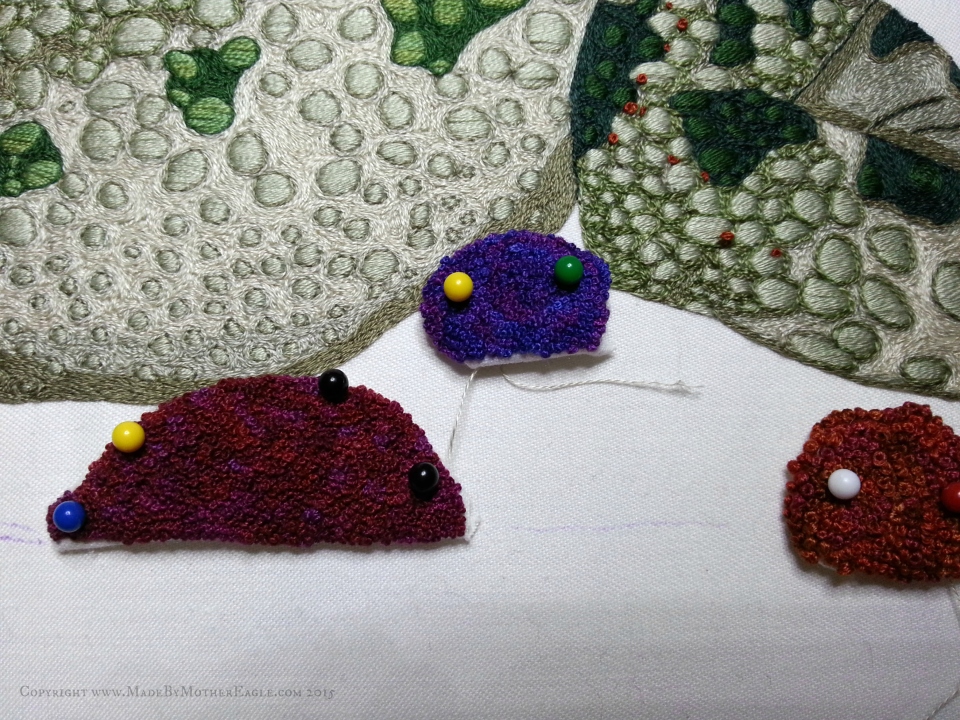 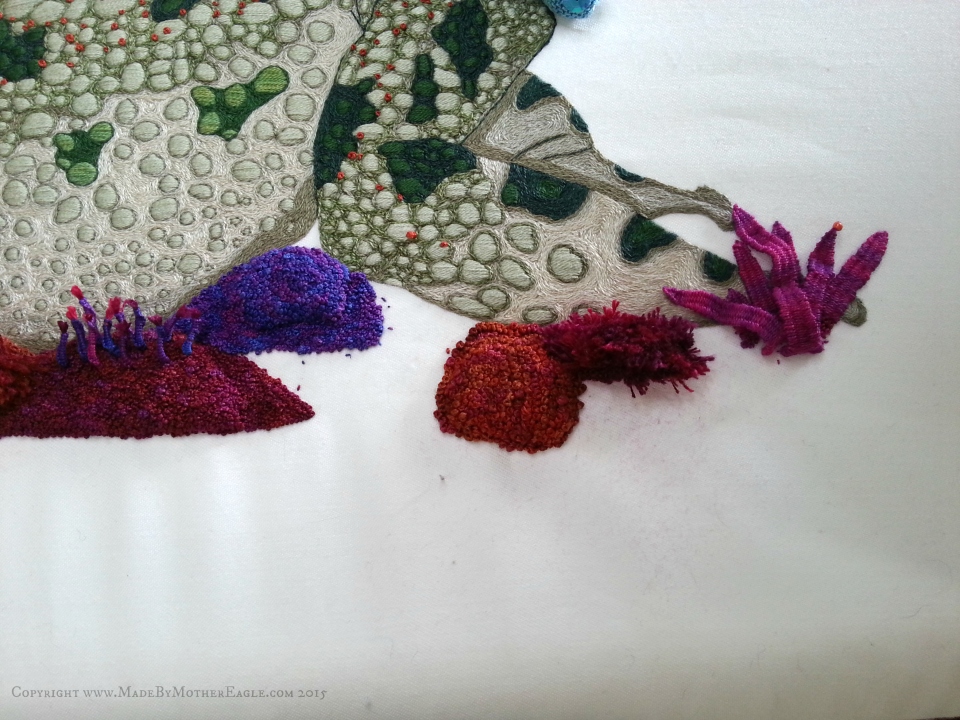 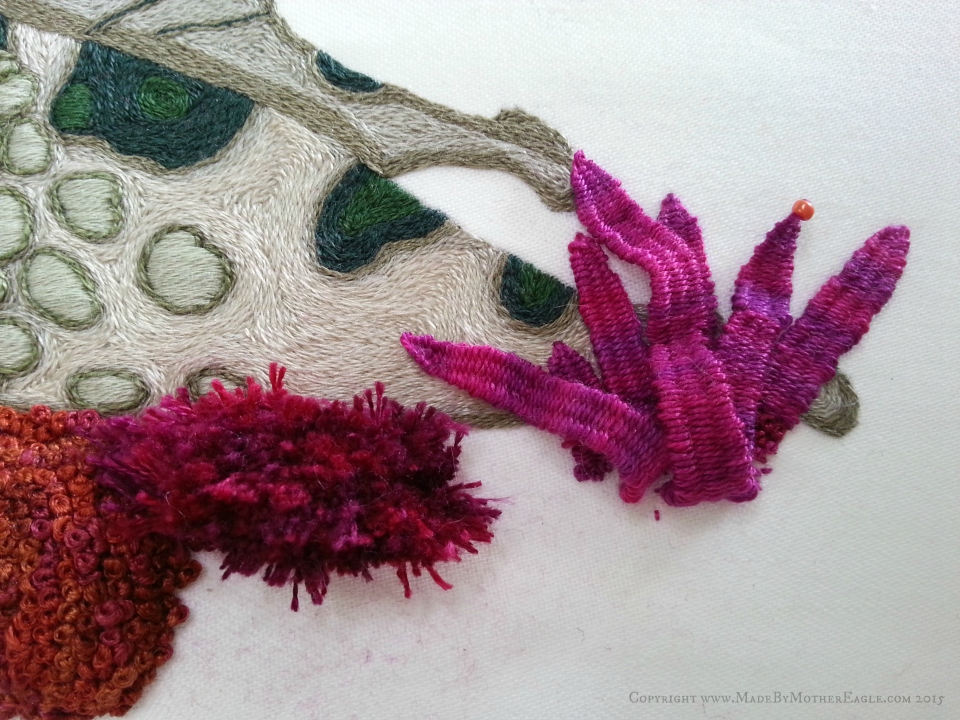 That’s a biro for scale.

The God of Adversity.

I am very happy with him. Next piece already in conception. Here’s some stats!:

17 needles were used in the completion of this project.

The God of Adversity will now be professionally stretched, blocked and framed.

P.S I love your comments.