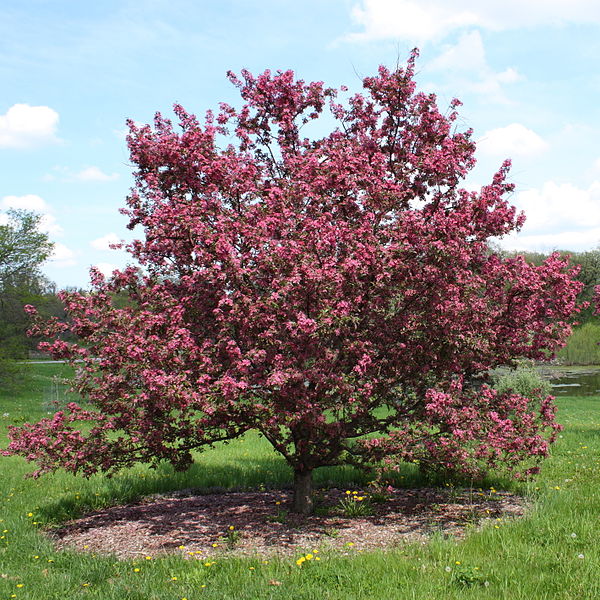 So I chose the Crab Apple tree for the next one.

In actual fact much (if not all) of the folklore for ordinary apples apply here – which is a lot – but I specify Crabapple as it is the original and only indigenous ancient apple tree of Britain, the wild ancestor from which all cultivated apple species come from. So that seems appropriate to my type o’ thang. 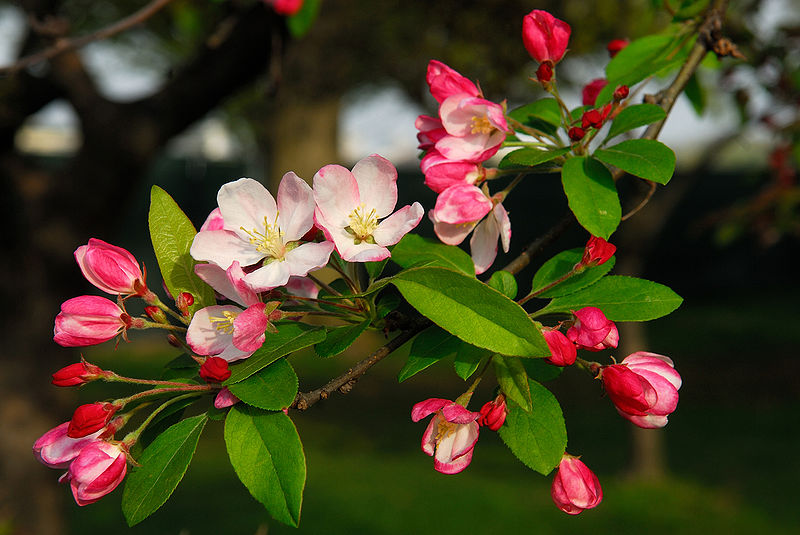 Also other cool things about Crabapple is that it is a thorn bearing tree unlike modern apples, and produces beautiful blossoms that smell like honeysuckle. It doesn’t grow very big – no more than 25 feet and although can grow in orchards it can also grow wild on the edges of woodland and in hedgerows. It’s bark is gnarly and angular, its leaves are glossy and heart shaped and its fruit is small and sour – more like a berry than an apple we know today, only about an inch in diameter. The fruit is called a pome. 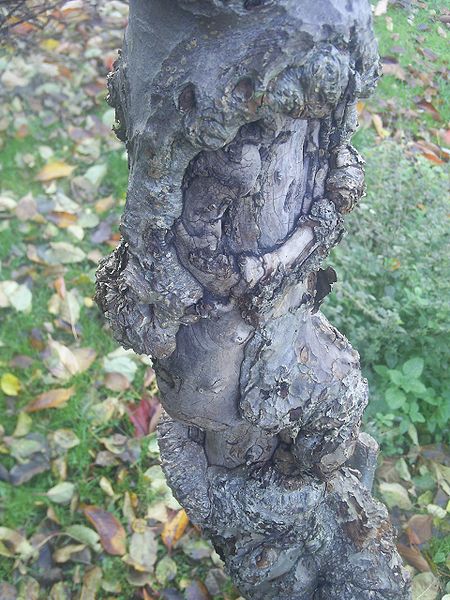 The Greeks and Romans planted apple trees throughout their respective empires. The healing properties of apples were recognised by traditional healers wherever the tree appeared. The Earth Goddess, Gaia, gave Hera, the Queen of Heaven, an apple tree when she married the Chief God, Zeus. That tree was kept in the Garden of the Hesperides, guarded by the dragon, Ladon. One of Hercules’ tasks was to fetch an apple from that tree.

In Norse tradition, the Apple is the tree of immortality. The Goddess Idunn was the keeper of the apples, which she fed the Norse Gods and Goddesses to keep them forever young. Apple wands were also used in Norse love rituals. To the Norse, apples represented long life, wisdom and love.

In Celtic tradition, the Otherwordly Avalon was also known as the Avallach, the Isle of Apples, ruled by Fairy Queen, Morgan le Fay. This is the land of fairies and the dead, where King Arthur was taken to be healed by his sister, Morgan. Like their cousins to the North, the Celts attributed the power of healing and youth, or rebirth, to apples. Apples are one of the magical trees part of the Celtic Ogham tree alphabet. 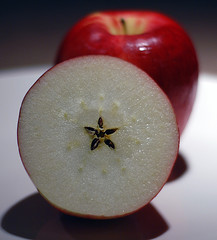 Apples have a star inside them which leads to the origin of a lot of witchcraft associated lore, due to the natural pentagram. Petriﬁed remains of apple slices on saucers have been found in tombs dating back over 5,000 years. The Medieval church believed enchanted apples could be given to a victim to cause demonic possession. Before eating an apple you should rub it to remove any demons or evil spirits hiding inside.

In a Medieval Irish story Connla the Fair, an Irish prince, fell in love with a beautiful Faerie woman, who arrived on the Irish shore in a crystal boat. She offered him an apple from the world of Faerie; he took the fatal bite, and was hers forever. They set sail for her magical island where the trees bore both fruit and blossom, and winter never came. There, they ate an ever replenishing stock of apples, which kept them young forever.

The deliberate felling of an apple tree was punishable by death in ancient Irish law. 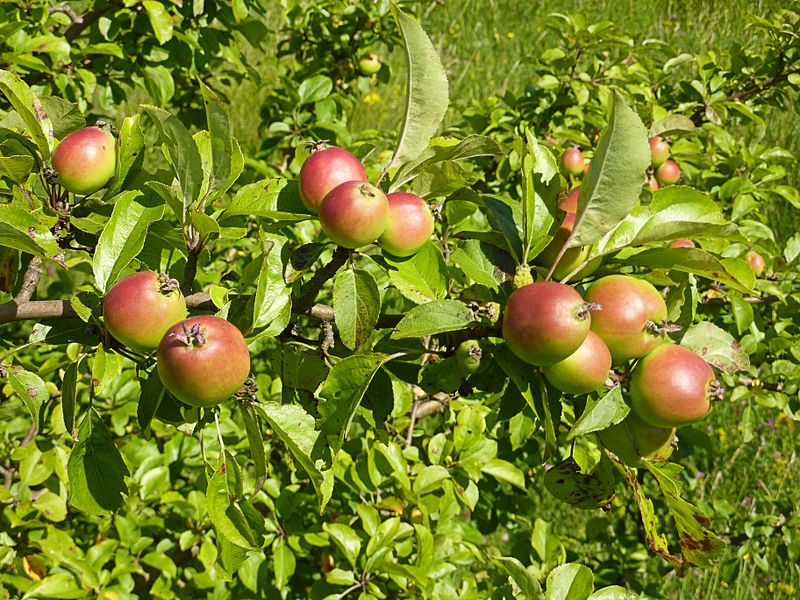 The sacred Druid plant, an t-uil-oc (Mistletoe), is often found on Apple trees, making it an especially holy tree to the Druids, along with the Oak. In the Irish Druid tradition, the Silver Bough is cut from a magical Apple tree, where silver apple shaped bells played a mystical tune, which could lull people into a trance state. Druids could make contact with the Otherworld during a trance enhanced by this silver apple bough.

Apples are customarily a part of the ‘Dumb Supper’, a silent Feast of the Dead given on Samhain Eve. Participants set a place, with broken crockery, at the head of the dining table for the ancestors, and not a word is spoken during the Dumb Supper. After the feast is over, the leftover food and broken crockery is ceremonially taken outside, into the woods, for the spirits to consume on this wild Halloween night. This is a powerful ceremony of communion with the dead. Any apples on the tree unharvested after Samhain are left for the spirits. 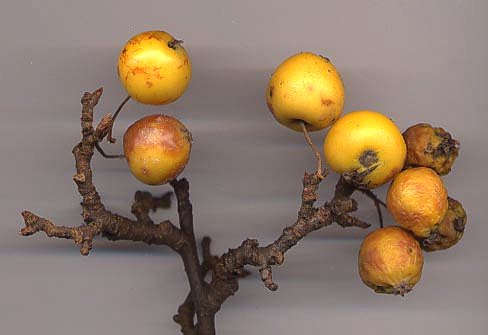 In Great Britain it is customary to wassail the oldest apple tree in the orchard on Twelfth Night (either January 6th or old Twelfth Night on January 17th) to ward off evil spirits and beseech the trees to produce a fine harvest of apples the following spring. The oldest tree is named Apple Tree Man, and is the guardian of all the trees in the orchard. There are many traditions connected with this rite, including shooting through the branches to ward off evil spirits, and pouring apple cider through the roots.

Toast soaked in apple cider is placed in the branches for the Robins, who embody the spirit of the apple trees. Celebrants drink warm cider and sing traditional Wassail songs. Wassail probably comes from the Anglo Saxon words, wes hal, meaning good health. The last apple is often left on the tree at harvest time, for the Apple Tree Man, to ensure a good harvest the next year.

Finally, Unicorns live beneath apple orchards. On a misty day you may see one eating sweet magical apples.

One thought on “Crabapple – Herb Lore”